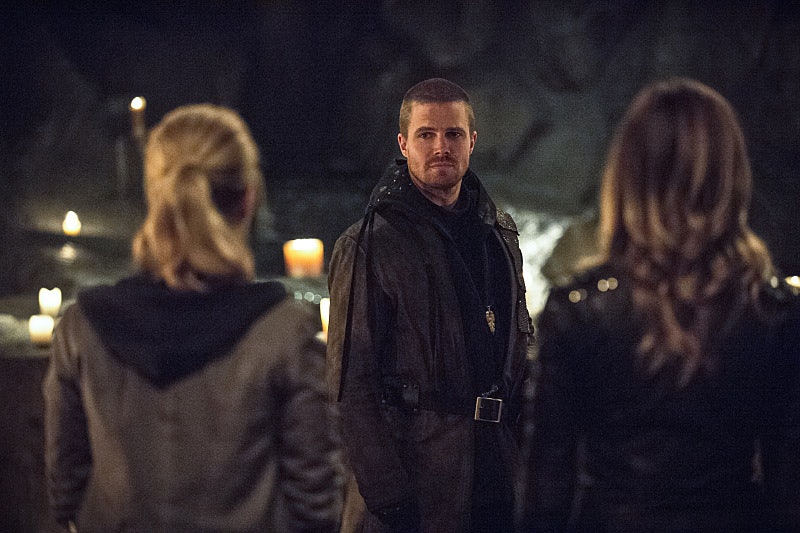 There have been a lot of new changes happening in Oliver Queen's life lately. For one thing, he's now a full-blown member of the League of Assassins and goes by the identity of Al Sah-Him, which means The Arrow in Arabic. However, there is one other important aspect of Oliver that is different and deserves to be discussed. His hair. I'm not sure if this was all part of his League initiation process (you know, a kind of — join the League, get a free haircut! — type of deal) or if he just felt like getting a new do to match his Heir to the Demon ensemble. Either way, Oliver's haircut on Arrow is a major cause for concern. For one thing, it's simply a little too short for my liking.

Granted, it's impossible for someone like Stephen Amell to not look hot no matter what kind of hairstyle he's sporting. But personally, I just prefer it with a little more length. Then there's the matter of what else this new haircut could signify. Anyone else notice that his new do coincides almost perfectly with his change in personality? Perhaps the Arrow writers are trying to tell us something. Maybe the shorter Oliver's hair is, the more dangerous he becomes. Remember back in Hong Kong when Oliver was sporting some pretty incredible luscious locks? He was so kind and sweet — far from the usually broody (yet super sexy) vigilante we usually see standing before us. The hair length could very well be the key to his personality.

Of course, I don't actually think that someone's personality can change simply thanks to a haircut. (Though my great bang debacle of 2007 certainly left me in a villainous kind of mood.) I'm simply pointing out, though, that the writers are clearly trying to make Oliver give off a more dark and evil vibe. And one way they're going about doing that is by showcasing him in a new wardrobe and very short hair. (Hair to the Demon, if you will.)

But the great thing about hair is that it can always grow back to the way it once was, which could, in turn, be very reflective of Oliver's fate by the end of the season. He may be a League member for now, but that doesn't mean he'll definitely become the next Ra's al Ghul. Whether it be through his marriage to Nyssa or by some other loophole, I have a feeling our Emerald Archer will be able to return to Starling City in no time. Let's just hope that in the meantime he doesn't harm a hair on anyone's head. (Sorry, I had to.)

More like this
The “Botticelli Bob” Is The Chicest Summer Style For Short Hair
By Audrey Noble
Why Sarah Jessica Parker Wanted Fans To Stop Calling Her Hair Choice “Brave”
By Brad Witter
Everything You Need To Remember Before Westworld Season 4
By Brad Witter
Why Simone Ashley Had To Study Snails For Intimacy Training, Pre-‘Bridgerton’
By Grace Wehniainen
Get Even More From Bustle — Sign Up For The Newsletter