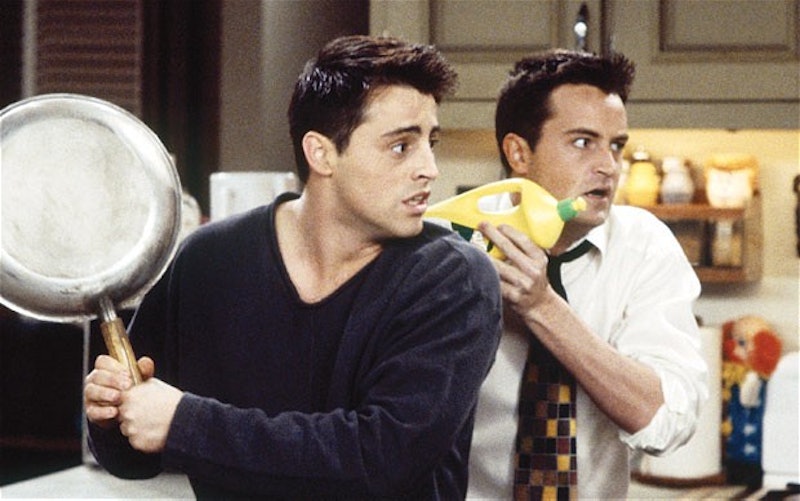 It's time we honor one of TV's best bromances of all time: Joey Tribbiani and Chandler Bing. Since the very beginning of Friends, Joey and Chandler proved they had the friendship of all friendships, even when Chandler kissed Kathy and when Joey got inside the entertainment center causing them to get robbed. Could there be two friends who loved each other more? The answer is no, because Joey and Chandler will forever be "best buds."

Seeing as it's been 11 years since the Friends series finale (who else still can't watch the episode without crying?), I thought it's due time to focus not on the big Rachel and Ross ending, but instead on Joey and Chandler's storyline during our last moments with them. Why? Well, because they were the best part of "The Last One." Don't get me wrong, I LOVE my Phoebe, Rachel, Monica, and Ross, but there's just something about how Joey and Chandler ended their story that makes my heart happy — and melt.

From the chick and the duck 2.0 to their last "game" of foosball to their "lame cool guy handshake," Joey and Chandler's sendoff couldn't have been more perfect. Here are 11 reasons Joey and Chandler were the best part of the Friends series finale.

When Joey Welcomed Home The Twins

Even though Joey's welcome home sign for baby Bing (before he found out Chandler and Monica had twins) wasn't the best (probably because he sat in the red paint), it's the thought that counts, right?

When Joey Commented On The Twins' Names

You couldn't have ended the series without typical, dumb Joey. When Monica and Chandler revealed the twins' names, Joey responded, "Hey, that pregnant girl's name was Erica!" Of course, Chandler replied, "Yeah, it's a shame you two didn't get to spend more time together."

When Joey Gave His Housewarming Gift

What better way to sendoff Monica and Chandler to their new home than by gifting them with a baby chick and a baby duck?

When Joey Made Bird Calls

Remember when Joey couldn't find the chick and the duck? He walked around the apartment saying "tweet" and "quack," which gave Chandler the opportunity to be his sarcastic self.

Of course, after losing the chick and the duck, it only made sense for Chandler and Joey to go bird hunting. Too bad they found them in the foosball table.

When Joey & Chandler Had Their Last Foosball Game

Sadly, the baby chick and baby duck got stuck inside the foosball table, so not only did Chandler & Joey have to say goodbye to their players with a goodbye of "good game," but they also had to have Monica destroy the table. That foosball table was like another Friends character.

When Joey Got In His Last Acting Reference

Chandler helped make Joey's acting career happen (mainly, because he paid for everything), so it was only fitting that Joey quoted a line from one of his many failed projects when planning on how to extract the chick and the duck.

When Joey & Chandler Bonded Over The Baby Chick & Duck

Is there anything better than watching Joey and Chandler bond over two cute birds? Absolutely not.

When Chandler Said This

After Chandler told Joey to keep the chick and the duck, Joey said they were a great reason for Chandler to visit. Then, Chandler said the best line ever: "I think there may be another reason." So many tears.

Then, their final one-on-one scene started with a "lame cool guy handshake."

Thankfully, it ended with an "awkward hug."