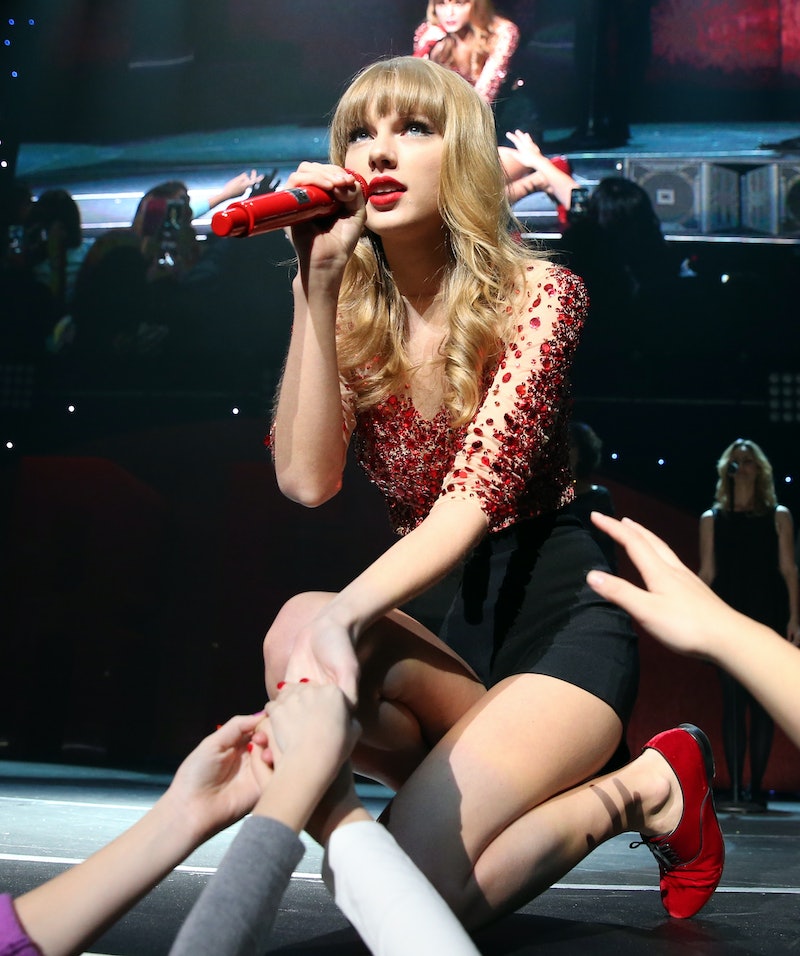 As if I needed any further proof that Taylor Swift is my spirit animal, it turns out she’s just as seriously obsessed with Jane Austen as I am. In fact, Jane Austen’s hunky leading men are literally all she sings about. It’s so obvious, I actually can’t believe nobody has noticed it before.

Serious Swifties will remember that back in the Love Story days, word on the street was that Swift was singing about Pride and Prejudice . I mean, other than the fact her characters were called "Romeo" and "Juliet," of course. But her music video definitely mirrors that Colin Firth white shirt moment, and that should have been our first clue: Taylor Swift is a Janeite, and I can prove it.

I, too, used to be taken in by the rumors; I, too, was convinced she was singing about Jake Gyllenhaal and Joe Jonas. But after listening to her back catalogue in the shower every morning this week, I realized her entire discography is actually just a tribute to our favorite Regency bachelors. Here are eight songs that prove all those celebrity rumors wrong. TayTay doesn’t have time to write about Harry Styles and Taylor Lautner, because all her angst belongs to Mr. Darcy.

Gossip sites claim this T-Swiz ballad is about serial heartbreaker John Mayer, but he’s nowhere near as much of a cad as John Willoughby. Willoughby’s the scoundrel who impregnates a 15-year-old, charms teenage Marianne into falling in love with him, and then runs away to marry someone richer. Swift may not have read the book quite closely enough; she sings, "Don’t you think nineteen’s too young to be messed with?" when Marianne was in fact an even more naïve 16, but she gets one heartbreaking detail right: "the girl in the dress cried the whole way home."

This song is about the sexy flirtation between the handsome Frank Churchill (who’s got that "James Dean daydream" look all right) and the elegant Emma Woodhouse. Their love affair mainly consists of brash displays of PDA, such as giggling over a word game together in public, and insulting old ladies on picnics. But of course, in classic Swift fashion, it all goes wrong. She hears that he’s "been out and about with some other girl," he admits that "what [she’s] heard is true," and then he ups and marries Jane Fairfax just like that. I guess everything goes out of style in the end.

This song finds Swift daydreaming about stopping the wedding of the man she loves. "Not the kind of boy who should be marrying the wrong girl": she must be talking about poor Edward Ferrars. Trapped in an engagement from his youth, Edward is unable to marry the girl he really loves — Elinor. The sarcastic lines about his "lovely bride-to-be" are classic Elinor; throughout the book, Elinor’s exchanges with Edward’s fiancée are hilariously passive aggressive. Poor Edward, Swift sighs, "You wish it was me, don’t you?"

It was not love at first sight for Elizabeth Bennet and Mr Darcy. He thought her only tolerably pretty; she thought him arrogant and rude. "I never saw you coming," sings Swift. Too right — this love affair came out of left field. In the end, loving Darcy taught Elizabeth not to be so prejudiced, and changed her into a more accepting person. "I never saw you coming, and I’ll never be the same."

At the other end of the Austen love-at-first-sight spectrum we have Henry Tilney, who charms Catherine Morland at their very first meeting. "Playful conversation starts, I counter all your quick remarks," sings Swift of the wonderful exchange. Catherine is absolutely smitten, and Swift’s song could be about nobody else. "My thoughts will echo your name until I see you again," she gushes, and it’s true. Tilney might not return for several chapters — but Catherine, enchanted, waits.

Henry Crawford is a nasty piece of work, and Taylor Swift knows it. On a whim, he decides to make poor Fanny Price fall in love with him, merely to amuse himself. "You could write a book on how to ruin someone’s perfect day," Swift snarls, and her song is one long angry attack on Henry’s heartless behavior. "Why do you have to make me feel small so you can feel whole inside?" she asks, and it’s a fair question.

This regretful song is obviously about the tragic romance between Anne Elliot and Frederick Wentworth. They were madly in love eight years ago, but Anne’s snobby family persuaded her to reject his proposal. Wentworth has never stopped being angry at Anne, and continues to be cold and indifferent towards her. "I’d go back in time and change it but I can’t," Swift mourns. It all comes to a head when Wentworth overhears Anne having a debate about love and gender, claiming that women never give up on love even when all hope is lost. Swift’s ballad nails the subtext: "This is me swallowing my pride, standing in front of you saying 'I’m sorry for that night.'"

The most underrated of all Austen’s love stories is that between Harriet Smith and Robert Martin. Harriet is thrilled when Robert asks for her hand in marriage — that is, until the snobbish and meddling Emma gets involved, and convinces Harriet that Robert is too low-class for her. Poor Harriet (or Tai, as we know and love her from Clueless) is bounced from man to man through Emma’s ill-fated matchmaking schemes, never quite knowing how to behave. Finally, Robert proposes again. And this time, Harriet is ready to declare "I’m only me when I’m with you" — and gleefully accept.

More like this
Sadie Sink Would Escape Vecna From 'Stranger Things' With This Taylor Swift Song
By Grace Wehniainen
'The Summer I Turned Pretty' Using “Cruel Summer” Has Twitter Begging Taylor Swift To Release A Music Video
By Radhika Menon
Taylor Swift's “Carolina” Theme For 'Where The Crawdads Sing' Soundtrack Is Here
By Jake Viswanath
16 Novels That Paint A Realistic Portrait Of Abortion
By K.W. Colyard
Get Even More From Bustle — Sign Up For The Newsletter