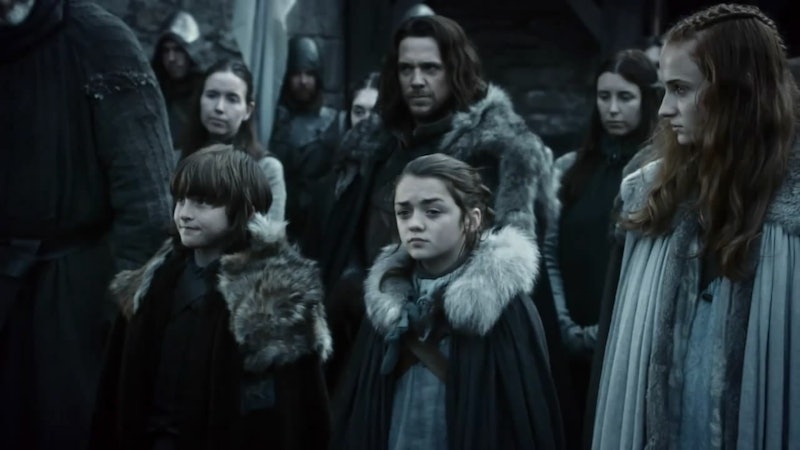 Along with all of its other incredible traits, (and its incredible characters like Arya Stark and Daenerys Targaryen), Game Of Thrones really does make you feel better about your own family. After all, in Westeros, everyone's family tree is pretty messed up (especially if you're a Lannister), and there rarely such thing a familial bliss. Even if you do get along with your family most of the time, there's always the threat of things turning terrible in a heartbeat: Mothers, fathers, sisters, and brothers are constantly being torn apart or murdered, and there are countless instances of family members stabbing each other in the back (sometimes literally) all in the name of gaining more power. They say when you play the game of thrones you win or you die, but damn, these guys are not playing around.

However, the one family that managed to always remain the healthiest when they were together was the Stark family. I mean, they're not exempt from death and destruction (A Song Of Ice And Fire author George R. R. Martin realized how much we all love them and promptly killed, like, most members of the family off — swell guy, that one!) but when they were hanging out together in Winterfell, blissfully unaware of the bloody fates awaiting them, their family dynamics were pretty similar to the average family's: Watching Sansa and Arya's back-and-forth sometimes reminds me of my childhood, and don't even get me started on how real the tense relationship between Catelyn and Arya was (even though, of course, we all know Cat was an incredible wolf mom).

Of all the Starks, in fact, Arya was one of the most relatable. Sansa has her relatable moments, and Robb definitely does (aka, all the times he didn't listen to his mom and then realized he had made a TERRIBLE MISTAKE), but there's just something about Arya's struggles that set her apart. And, if you've ever felt like you just didn't fit in with your family, or if you're consistently the one who wants to buck tradition and march to the beat of your own drum, you might just agree.

Not sure? Here are seven ways to tell whether or not you're the Arya Stark of your family:

You're The Black Sheep

Even though Jon Snow is technically the outcast of the family, he's still pretty much content to follow his expected path (and he did, by joining the Night's Watch). If you're an Arya, however, you're the true black sheep of the family: You never really feel like you're in the right place.

You Have A Mouth On You

If your mother repeatedly chastised you for cursing like a sailor (much like my own mother has in the past), you might just be an Arya Stark.

You March To The Beat Of Your Own Drum

If you're like Arya, you don't want to conform to society's expectations for you. In Arya's case, she didn't want a life of wearing pretty dresses, marrying young, and acting like a "lady" the same way her sister Sansa did: She, instead, wanted to learn how to fight. However, in Westeros, this was something only considered for boys, so it was difficult for her to be taken seriously in the beginning — but, she managed to be in the end. The same goes for you: You could easily conform, because it'd be, you know, easy. But you've got an agenda of your own, and you plan on pursuing it.

You know that respect is earned, not a given — and even if someone outranks you, you don't let them push you around. This gets you in trouble with your family, but what are you gonna do?

Even if your parents aren't gonna teach you what you want to learn, you don't give up. You are a resourceful, independent queen, and there's no way you're just gonna sit idly by not doing what you want to do just because you don't have help.

Living well is the best revenge against people who expect to see you fail, and as an Arya Stark, you not only understand this, you live by it. By kicking major butt at whatever you set your mind to, you're totally proving all the people who didn't believe in you wrong.

At the end of the day, no matter how rebellious and tough and sharp-tongued Arya is, she is the favorite of her family... and so are you. Who doesn't love a little maverick kid like Arya? Of all her brothers and sisters, Arya is the one that forges ahead on her own: She easily adapts, she's smart, she's hilarious, and she has no patience for any obstacles in her way. It's impossible to not love her!

More like this
Yes, Joseph Quinn Is Actually Playing The Guitar In This Epic 'Stranger Things' Scene
By Alyssa Lapid
At 14, Jenny Han Wrote Rom-Coms About Her Friends & Fan Mail To Leo DiCaprio
By Alyssa Lapid
Sparks Fly Fast & Furious In 'Honey & Spice'
By Bolu Babalola
Florence Pugh & Zoe Kazan Have Teamed Up For A Major New Netflix Series
By Rachel Mantock
Get Even More From Bustle — Sign Up For The Newsletter