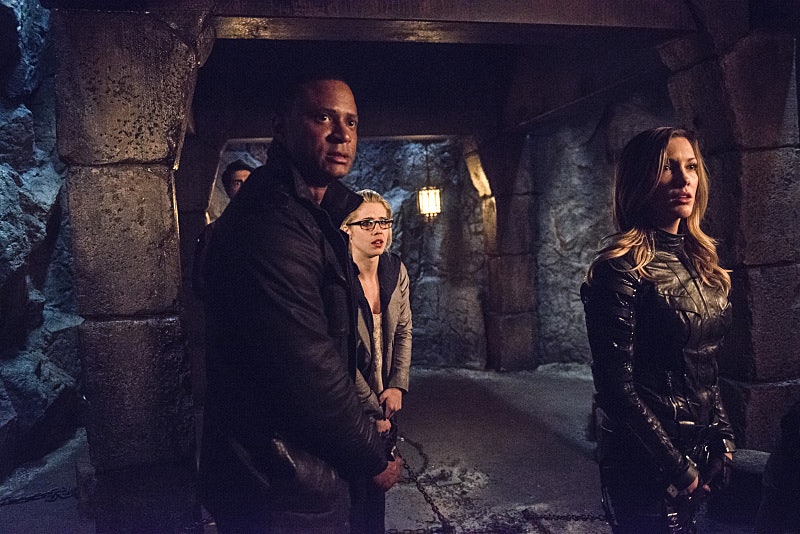 Well that was super depressing. Not only did Wednesday night's Arrow episode "This Is Your Sword" result in the death of Maseo, but it also offered up the insane possibility that everybody on Arrow is now dead. Or at least that's what they wanted us to believe. But we know that's impossible, of course. There's just no way the series would kill off almost its entire main cast… right? I mean, maybe something crazy like that could happen during a big season finale, but even then it seems highly unlikely. Regardless, though, this little scare was certainly enough to send most of us into full-on panic mode no matter how many times we keep repeating to ourselves that there has to be some sort of explanation.

From the very beginning of the episode it was made clear that Oliver was faking his whole Al Sah-Him identity and had absolutely no intention of releasing the Alpha Omega bioweapon upon Starling City. But then after all the double crossing and massive capturing of Team Arrow, it was started to become unclear again as to whose side Oliver was really on. A question that was made all the more perplexing after Oliver allowed said virus (you know, the one that is super dangerous and can quickly kill you) to be unleashed on his imprisoned friends, which included the likes of Diggle, Laurel, Ray, Malcolm, and even Felicity. Then Oliver just walked away as they all slowly passed out.

So what does this all mean? Like I said, clearly Oliver has a plan in mind. I highly doubt he would allow his most cherished friends to die all so that he could pull off a rouse. Either he tampered with the bioweapon beforehand so that it no longer possesses a deadly quality or he somehow knows of a cure that he can get to in order to save them. I mean, the promo for next week alone seems to indicate that everyone (aside from poor Maseo, RIP) is still alive and well. So I'm not too worried about how this plays out, but that certainly didn't stop me from reaching for the tissues as Diggle and Felicity had what they thought would be their final friendly exchange. (#BFFS)

So don't worry, folks. Rest assured Team Arrow will be back to kicking major crime butt in Starling City in no time. I'm just curious to see how it all comes to pass. Don't let me down, Oliver. I'm trusting you.