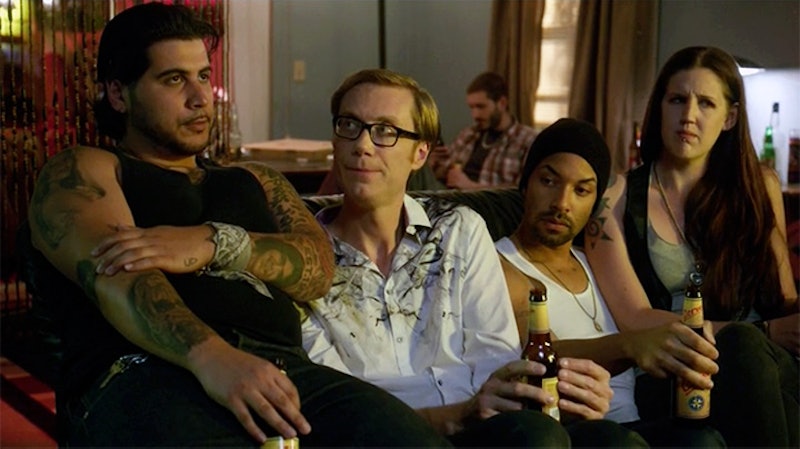 Ever imagine you’d see Stuart in bed with Jessica? That’s where we’re at with Hello Ladies' first scene Sunday, but there’s no way they… no they didn’t. Relax, Jessica’s roof’s getting repaired so they’re actually just sleeping together. Strange that someone didn’t sleep on the couch though. At this point, they’re more friends who love each other, but the new sleeping arrangement does earn the respect of the LBC construction crew he hired to repair Jessica’s guest house.

The tough guys socially adopt Stuart for the night, and it’s like the Always Sunny in Philadelphia gang showing Mary Poppins how to party on the wrong side of town. He’s eager to prove himself at first, but that eagerness quickly melts into fear because the workers prove to be more hardcore than expected. The men bring him to a club they call Slumpbuster Central, where Stuart meets Easy E. And as luck would have it, what kind of guys is she into? All of them. Even Stuart. But what is a Slumpbuster? Let me explain:

1. A woman who you use casually to break a sexual dry streak and regain confidence; a female who busts your slump

Ex. I’d be dating Emily Ratajkowski if I didn’t repel women with the force and mystery of my self-delusion. She’s just a slumpbuster.

Next thing you know, Stuart’s recruited to deliver a beatdown at a Mexican restaurant and he hangs back as far back as possible, pretending to read the take-out menu. He takes some guacamole to the shirt and an elbow to the nose, but the boys settle it and they make plans to have sushi later.

They go back to the club where Stuart reluctantly gives into pressure and is all set for what appears to be his first sample of cocaine when a security guard saves him. When asked what they were doing in the same stall, Stuart’s quick to explain it was just a bit of fillatio. Shockingly, that goes the opposite of well with his new bros. Add LBC as another world in which he’s not welcome.

Wade, the show’s most lovable character, tries to reenact Officer and a Gentleman in a grand gesture, and Marion finally asks for the divorce. It’s just way too hurtful to watch him pick her up while she acts like Wade’s romantic move is something out of Taken.

Wade’s young daughter’s insistent line of questioning about Glenn prompts Jessica to ask him to define the relationship. Right on schedule, he’s got the perfect slimy exit strategy for that, and they have sex on Stuart’s bed while Stuart’s squeezed between tattooed people watching motorcycle crashes on TV somewhere in Long Beach. He calls the wrong girl easy — the half sister of the host, who happens to be swinging a Samurai sword at the time. But Stuart makes a run for it in the chaos and returns to bed with Jessica, who he finds reading between the fresh sheets. In the morning, the crew slaps him with an outrageous bill and vandalizes his garage.

Ok, we’re officially in Louie territory. The events of Stuart, Jessica, and Wade’s lives are too tragically sad. Stuart was ripe for a character-building adventure, and if he’d just gotten a well-deserved fist between the eyes, he may have learned something. But jumping among the three sad narratives leaves you not with belly laughs delivered by something darkly funny, but aches for Wade, who has finally been dealt a seriously depressing blow. It’s heartbreaking to watch him restrain his tears as his daughter giddily shows him dinosaur drawings. There’s a guy who actually deserves a Slumpbuster. It may be time to accept that the door on his marriage has closed.

About the show’s tonal shift: Merchant’s a natural actor, and it’s impressive to see him not playing himself and not always going for a laugh. He’s training us to experience more and more discomfort, but things have to look up next time.

Even now, having spent time earning street cred (sort of) with the LBC wet dick posse, if Stuart had to name three members of the NWA, he’d probably answer Iced Coffee, Easy Rider, and Professor Plum.