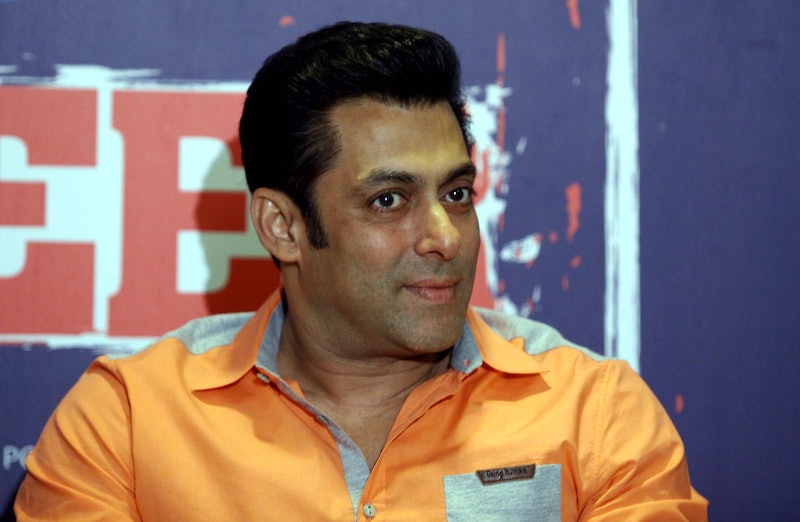 STRDEL/AFP/Getty Images
By Kirsten O'Regan
May 7, 2015

Legendary Indian actor and Bollywood superstar export Salman Khan was found guilty of culpable homicide and sentenced to five years in prison Wednesday, concluding a hit-and-run case that has been open for over 12 years. The New York Times reported that Khan, 49, was allegedly driving drunk one night in September 2002, when he hit five homeless men who were sleeping on a Mumbai footpath. The prosecution claimed that Khan then left the scene. One of the critically injured victims later died. On Wednesday, a Mumbai court ruled that Khan was guilty of the culpable homicide charge, as well as negligence and driving under the influence of alcohol.

Judge DW Deshpande handed down the judgement in a Mumbai Sessions court, telling the actor, “You were driving the car without a licence and you were under the influence of alcohol.” Khan — one of India’s most popular actors, who has consistently denied he was driving at the time of the incident — was granted interim bail for two days, The Guardian reported. He reportedly looked shocked and exhausted when he heard the sentence, and has launched an appeal, which will be heard on Friday. Despite the court’s decision, the drawn-out trial has done little to diminish Khan’s appeal in the eyes of the Indian public. As the Hindustan Times reported, #WeLoveSalmanKhan was the top Twitter trend in India a day before the verdict.

Khan was allegedly consuming cocktails at a bar on the night of Sept. 28, 2002. One of the victims of the hit-and-run testified, “Salman was so drunk he fell. He stood but he fell again and then he … ran away.” But when Khan gave evidence in March, he pleaded not guilty, and alleged that his driver, Ashok Singh, had caused the accident. Singh himself later corroborated that story, adding that a burst tire had made him lose control of the Toyota Land Cruiser’s steering. The Mumbai court clearly dismissed this version of events.

Khan first appeared on the big screen in 1989, and has since starred in over 80 Hindu-language movies and TV shows. According to the The Guardian, his popularity is such, among both Hindus and Muslims, that his movies are frequently timed to appear at the same time as the Muslim holiday of Eid. If the Mumbai court’s verdict is correct, and Khan committed culpable homicide before attempting to foist the charge onto his driver, the incident casts a very different light on the actor whose most recent movie (action thriller Kick) has him playing a lovable rogue.

Khan’s recent conviction and his professional success are difficult to disentangle — producers cashed in on Khan’s box-office pull, even as the homicide inquiry dragged out, with a series of films, in an array of genres, shot between the hit-and-run and the conviction. Khan has also been charged with hunting India’s endangered blackbuck in Rajasthan in 2006. Yet in 2014, Forbes India rated him as the country’s top celebrity.

An October 2012 article from Caravan — an Indian politics and culture magazine — examined the impact of the ongoing hit-and-run case on Khan’s onscreen presence. Shohini Ghosh writes that Khan’s characters often straddle “the borderlines of legality and criminality,” and that stories of Khan’s “violent fits, unstable personal life and criminal allegations” consistently occupy the Indian media. “[E]ven at the best of times,” Ghosh writes, “Salman Khan walks a risky tight-rope. There is no telling when he will slip and fall from the Olympian heights of superstardom into the dark crevasse of notoriety.” That time has arguably now come.

But fans have refused to give up on the star. As Rachel Dwyer writes in The Guardian, Khan’s constituency — mostly working-class Muslim males — have conflated his onscreen hero persona with the actor himself, and consequently refused to accept that he might be guilty, as evidenced by their outraged Twitter feeds. But heartfelt support for the actor was counter-balanced by voices applauding the conclusion of the long-delayed trial. “In my opinion, the truth has prevailed,” Arvind Inamdar, a former senior police official in Maharashtra State, told Indian news channel NDTV. “Celebrities should not have a different status from the common man.”

BBC News' correspondents suggested that although the five-year sentence may have been a shock to Khan, it’s not a terrible result — he could have faced up to 10 years jail time. The Guardian notes that Bollywood studios could lose millions of dollars if Khan’s conviction forces them to stop filming the movies he was slated to appear in. “Given how much Bollywood is struggling these days,” industry tracker Shailesh Kapoor told the publication, “it will hit where it hurts.”

More like this
Jurnee Smollett’s Heart Is Healing
By Rebecca Carroll
For These Abortion Clinic Volunteers, Going TikTok Viral Is A Risk Worth Taking
By Audra Heinrichs
5 Ways To Stand In Solidarity With Women In America From The UK
By Sophie McEvoy
How To Fight For Reproductive Rights, Based On How Much Time You Have
By Courtney Young
Get Even More From Bustle — Sign Up For The Newsletter