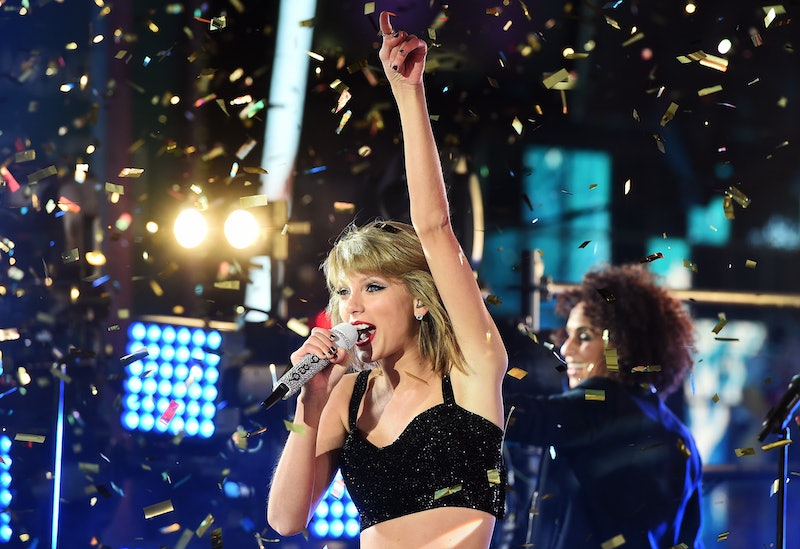 Amazing news for Taylor Swift fans, which is obviously everyone, right? The world will have reason to rejoice when Taylor Swift performs "Bad Blood" at the Billboard Music Awards on May 17th and releases the song's music video AT THE SAME TIME! After her knockout performances at the AMAs and VMAs this past year, the possibilities for what could come next are brain tickling. For those of you who don't remember — and, seriously, who are you? — Swift knocked it out of the stadium at those award shows with her lavish and joyful performances, which gives her a pretty high bar to meet in her BMAs performance.

At the 2014 Video Music Awards, Swift's "Shake It Off" performance made the song catchier than previously thought possible. She went full on Great Gatsby, surrounded herself with a million tuxedoed dancers, and incorporated a lot of infectiously joyful shoulder brushing (some say too much, I SAY NOT ENOUGH).

While we were still shaking the starlight out of our eyes from that, Swift brought "Blank Space" to the American Music Awards. With Broadway-level lighting and set design, she surrounded herself with 8 million tuxedoed dancers whom she then dated and murdered one-by-one. It was basically a four minute short play. She brought a whole new level of greatness to the song with the kind of kinetic, lavishly-produced live performance that we usually see from Madonna or Gaga. (She pulled a "Gagonna," if you will.)

I know it's a different song, but I'm not done watching her shake things off. Are you? I didn't think so. Anyway, it's not like bad blood is something you want to keep around. Get rid of it, Taylor! And what better way to get rid of it than to shake it off?

3. Taylor Swift Throwing Men Around The Stage With What Looks Like Magic

4. Taylor Swift Pretending To Be Insane

5. Goofy Joke In The Middle Of It

The girl likes being goofy. It's part of why we love her. Hell, maybe we'll see some goofy explosions.

This is unadulterated wish-making and rumor-mongering. I just want it to happen so badly. "Bad Blood" as a duet with Lorde? Heaven would open just so the angels could hear the two sing together.

I know, I know... "Stop trying to make 'Gagonna' happen." Hear me out! "Bad Blood" has a simple melody at the heart of it and rather somber lyrics (at least as far as Swift's canon is concerned). More so than the other two songs, "Bad Blood" could actually give her the opportunity to strip everything down, whip out a guitar, and remind anyone who's still hating that she's got some real chops behind the production.

More like this
Taylor Swift Fans Caught A Possible ‘1989’ Clue In Her Latest Awards Show Speech
By Grace Wehniainen
Will Beyoncé Be At The BET Awards To Perform “Break My Soul” Or Attend The Show?
By Jake Viswanath
Sadie Sink Would Escape Vecna From 'Stranger Things' With This Taylor Swift Song
By Grace Wehniainen
Michelle Obama & Taylor Swift React To The Supreme Court Overturning Roe v. Wade
By K.W. Colyard
Get Even More From Bustle — Sign Up For The Newsletter