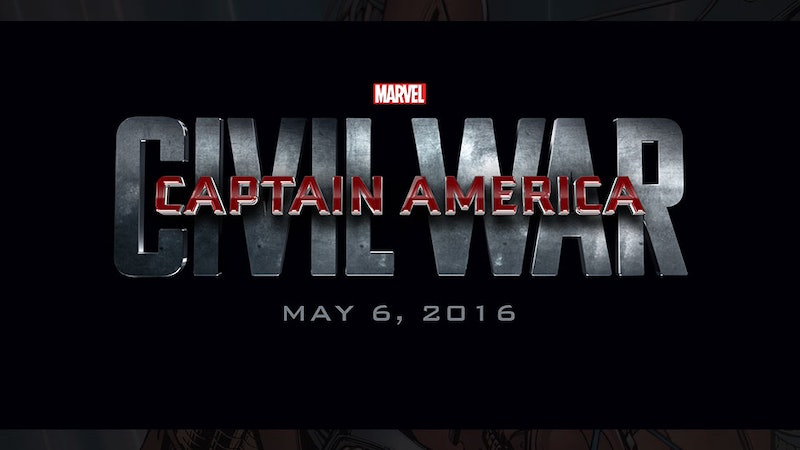 Are you still trying to process the events of Avengers: Age of Ultron? Well, there's no time! Marvel just announced the cast list for Captain America: Civil War (premiering in less than a year on May 6, 2016), and it is insane. While the movie is billed as a Captain America project, this monster of a movie includes nearly every member of the Marvel Cinematic Universe (MCU), plus a few new characters. It's all a little bonkers, but, at the same time, Civil War sounds like it has the potential to be epic if directors Anthony and Joe Russo — who did an excellent job with Captain America: Winter Soldier — can fit so many characters into one story.

Before we get to the massive list of Avengers, past, present, and future, who will be joining in this superhero extravaganza, Marvel also revealed a few plot details. Fans of the Civil War comics will not be surprised, but, for everyone else, here's how the huge Avengers rift is set to go down: Civil War will pick up where Age of Ultron left off with Captain America in charge of the new team. Unfortunately, the Avengers get involved in another saving the world adventure that leaves behind a lot of international damage. This causes political pressure for a governing system to be set up to control the Avengers, which in turn causes a rift within the group as a new villain threatens humanity.

Got it? Good. Now let's break down the cast list, starting with the major players. Captain America (Chris Evans) is right in the center of this mess, and on the opposite side is Iron Man (Robert Downey Jr.). Also joining them are Black Widow (Scarlett Johansson), Falcon (Anthony Mackie), War Machine (Don Cheadle), and new Avenger Black Panther (Chadwick Boseman). Those are the heroes we knew would be showing up, but the official cast list has its share of surprises too.

Yep, Ant-Man will make his first team appearance in Civil War, so, if you were thinking about skipping out on his big screen solo outing in July, then it is time to change your plans.

The mysterious Vision, who made his first appearance in Age of Ultron, will be in Civil War— probably to continue the buildup for Avengers: Infinity War.

After his expanded role in Age of Ultron, Hawkeye is ready to pick a side in the superhero Civil War. It will be interesting to see who Hawkeye allies himself with. Will he stick by his close friend Natasha or go his own way?

As one of the coolest new additions to the Avengers' lineup, it is awesome to know Scarlet Witch will be a big part of the action in Civil War.

If you thought Marvel was going to introduce Sharon and then forget about her, you were wrong. Agent 13 is returning, and maybe even getting to know Cap a little bit better.

The Incredible Hulk is the black sheep of the MCU, but Marvel is going to bring its story back into play just enough to reintroduce General Ross (super annoying father of Bruce Banner's girlfriend, Betty).

Everyone's favorite British actor (if he's not your favorite, then he should be), Freeman is going to be in Civil War. No word yet on who he will be, but does it matter? Freeman is now part of the MCU, people. This is not a drill.

So, Who's Not in Civil War?

The big missing names are The Hulk (Mark Ruffalo), Thor (Chris Hemsworth), Pepper (Gwyneth Paltrow), and Quicksilver (Aaron Taylor-Johnson)... although there are valid reasons for that last one. It seems odd for The Hulk and Thor to sit this one out, but, hey, even superheroes need a vacation sometimes. As for Pepper, a movie with this much Tony could really use a bit of Pepper. Get on that, Marvel.

The most surprising missing hero award goes to Spider-Man. The still to be cast web-slinger was rumored to be heading to the MCU in time for Civil War, but there's no mention of him in the Marvel release... at least not yet.