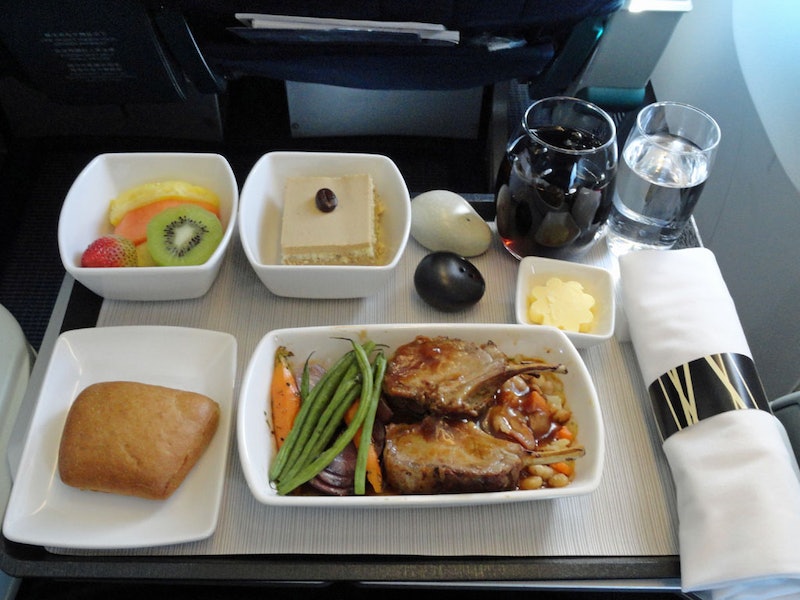 Anyone who travels frequently has probably asked themselves this question at least once in their life: Why does airplane food taste so bad? While it's true that it's improved over time, I don't think anyone is ever going to describe airplane food as good — and as it turns out, that's going to be the case even for in-flight meals prepared by the greatest celebrity chef in the world. Barbara Peterson of Conde Nast Traveler spoke to Lufthansa's SG Sky Chef executive chef for culinary development, Grant Mickels, in order to get to the bottom of the mystery… and hey, guess what? It's science. This isn't surprising, but it's good to know anyway.

To be fair, the article isn't new; Conde Nast Traveler originally posted it last summer. It's currently making the rounds again courtesy of Business Insider, though — and given that this question is one for the ages, I think it's worth revisiting no matter what time of year it is. Because seriously, you guys: What gives, airplane food? What did we ever do to you?

According to Peterson, there are actually a couple of things that contribute to bland, unappetizing airline meals. Here are two of the top offenders — which, unfortunately, also happen to be things we can't really do much about:

Fun fact: High altitude affects how you taste things. Said Mickels, “At 35,000 feet, the first thing that goes is your sense of taste.” As the plane rises, both the pressure and humidity in the cabin drops — and as a 2010 study conducted by Germany's Fraunhofer Institute found, two things happen as a result: You can't smell things as well (with smell actually being an essential part of taste — that's why everything tastes super bland when you have a cold with a stuffy nose), and your threshold for tasting salty and sweet things goes up. It's worth noting that the study was comissioned by Lufthansa, so do with that what you will — but it is pretty interesting that the same ingredients tasted differently to the participants depending on whether they were in a high altitude or low altitude environment.

Peterson also spoke with scientist Harold McGee, who wrote On Food and Cooking: The Science and Lore of the Kitchen. Thee food that's meant to be served on an airplane, you see, is prepared on the ground — after which it's chilled, stored, loaded onto a truck, and brought to the plane long before it's ever served to passengers. The hours that pass between its initial preparation and its serving time might also have something to do with how it tastes once it gets to you. Said McGee to Peterson, who interviewed the scientist for a previous article a number of years ago, “When food gets warmed up to room temperature or above, it starts to deteriorate, and once it crosses a threshold — 160 degrees for meat, 140 degrees for fish — it is going to be dry and tough, no matter what you do.” Whomp, whomp.

But Then There's This:

Of course, these days, the only folks who actually get full meals on a flight are typically business and first class passengers. The rest of us? We're at the mercy of whatever we were able to bring from home, whatever was available in the airport terminal, or whatever snack boxes the plane itself happens to have available. Personally, I think you're usually better off prepping stuff at home; The Kitchn has some great suggestions for the sorts of snacks that both travel well and won't get you in trouble with the TSA. Either way, though, one thing's for sure: Not great food is better than spending an entire flight with a grumbling tummy. So, y'know… at least there's that.