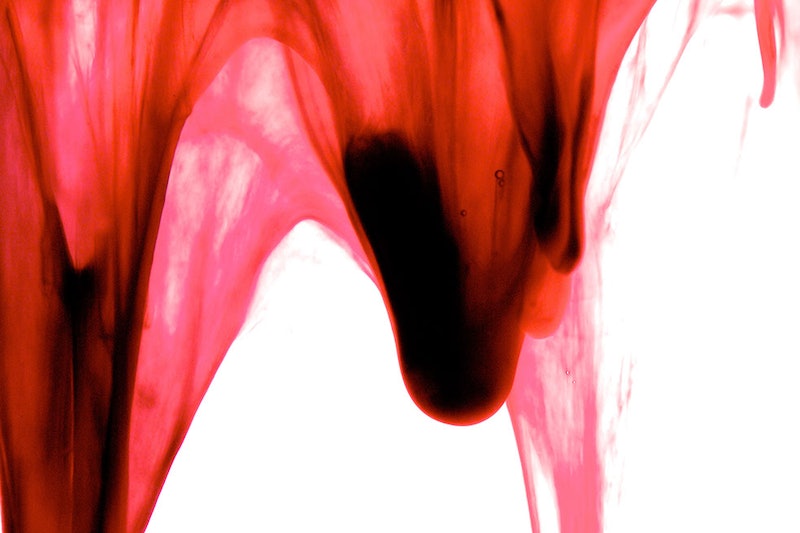 Feminism may have come a long way since the early 1900s, but there seems to be one subject it can't seem to touch: menstruation. Periods are still considered off-putting at best and taboo at worst, a perception that artist Jen Lewis's "Beauty In Blood" series hopes to change. Although people can, and frequently do, talk about penises and farts all day long (looking at you, Adam Sandler), menstrual blood is an easy way to derail any conversation into awkward giggles and grimaces before a quick change of subject. After switching from traditional pads and tampons to the more "hands-on" menstrual cup, however, Lewis has a different view. "When I had some blood on my fingers after emptying my cup, I started to wonder about why society framed up menstruation as something disgusting," she told the Huffington Post. As anyone who has seen a Quentin Tarantino movie can attest to, our culture has no problem with tossing around literal buckets of blood, but the second that blood comes from a woman's vagina, it's suddenly inappropriate. Just last year, photographer Rupi Kaur's image was taken off Instagram because it featured a period stain, and the excitement feminists feel about Hello Flo's refreshingly frank tampon advertisements speaks volumes about how periods are viewed in the modern day. We may not consider women mentally unstable during menstruation anymore, but attitudes are still depressingly backwards on the subject.

Citing feminist artists such as Judy Chicago and Ana Mendieta as influences, Lewis hopes that her artwork will at least inspire conversation. "Beyond communicating a singular message, my hope is to stimulate these conversations and get people speaking openly about all the issues related to menstruation," she told the Post. "I hope 'Beauty in Blood' communicates that menstruation is nothing to be ashamed of or fear."

CobraYou'd certainly be hard-pressed to call any of the images in "Beauty in Blood" disgusting. In the beginning, Lewis and her husband, Rob Lewis, captured the photos by pouring her blood into an empty toilet bowl, but they eventually moved on to a small aquarium filled with salt and fresh water. "Every pour was different," Lewis said.

Check out more of her photos below, and if you're in the area, be sure to stop by "Widening the Cycle," which features images from "Beauty in Blood," at the Society for Menstrual Cycle Research conference this June.

If I Bled Blue

5/8/15: Edited to correct the name of the exhibition at the Society for Menstrual Cycle Research conference.

More like this
15 Talc-Free Makeup Brands For Safer Eyeshadows, Powders, & More
By Audrey Noble
The Beauty Industry Disrupter From Dallas
By Jordi Lippe-McGraw
Everything To Know About Daxxify, The Newest FDA-Approved Skin-Jectable
By Olivia Rose Ferreiro
15 Must-Have September Beauty Launches, According To Our Editors
By Rachel Lapidos
Get Even More From Bustle — Sign Up For The Newsletter