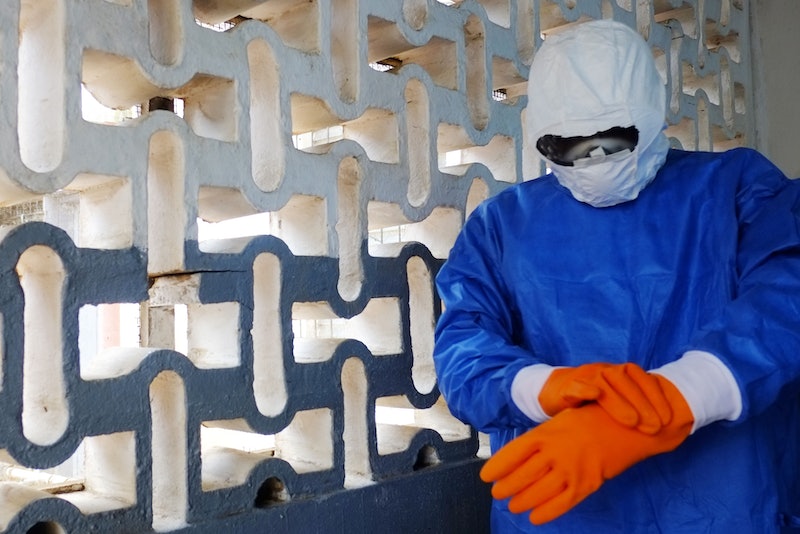 Dr. Ian Crozier, an American doctor who contracted Ebola while working in Sierra Leone in September, was released from the hospital in October when the virus was no longer found in his blood — but it emerged this week that two months later, Ebola was found in the doctor's eye. This is the first time the virus has been discovered inside the eye of a patient who's blood no longer contains it. It's known that Ebola sticks around in semen for months, but other bodily fluids were previously thought to be clear of it after recovery. The Ebola in Crozier's eye was found after he returned to the hospital with inflammation and high blood pressure in one eye, which causes swelling and potential vision problems, according to The Associated Press.

Crozier, 44, was treated at Emory University Hospital's special ebola unit in Atlanta, where some fluid from his eye was tested for the virus and came back positive. The tears and tissue around the outside of his eye did not contain Ebola though, making casual contact with Crozier not a public health risk, but this case illustrates that survivors of Ebola need to be monitored for the problem. Crozier's ophthalmologist, Dr. Steven Yeh, told the AP that Crozier hasn't fully recovered his vision yet, but is improving.

Dr. Daniel Bausch, a senior consultant to the World Health Organization (WHO) and an infectious-disease specialist at Tulane University, told The New York Times that as the Ebola outbreak tapers off in West Africa, WHO is trying to gather information about survivors and that the reports of eye trouble were of concern. "It’s a major thing we need to study and provide support for," Dr. Bausch said. Dr. John Fankhauser, the medical director at ELWA Hospital in Monrovia, Liberia, told The Times, "We’re seeing symptoms in patients who’ve been out of the treatment unit for up to nine months. They’re still very severe and impacting their life every day."

On Thursday, WHO announced that the number of reported Ebola cases in Sierra Leone and Guinea last week were the lowest this year. There have been more than 26,600 cases of Ebola in West Africa since December 2013 and more than 11,000 deaths. According to the AP, Liberia plans to declare the outbreak over in the country unless new cases pop up. Ten people were treated for the virus in America, including Crozier, two of whom died.