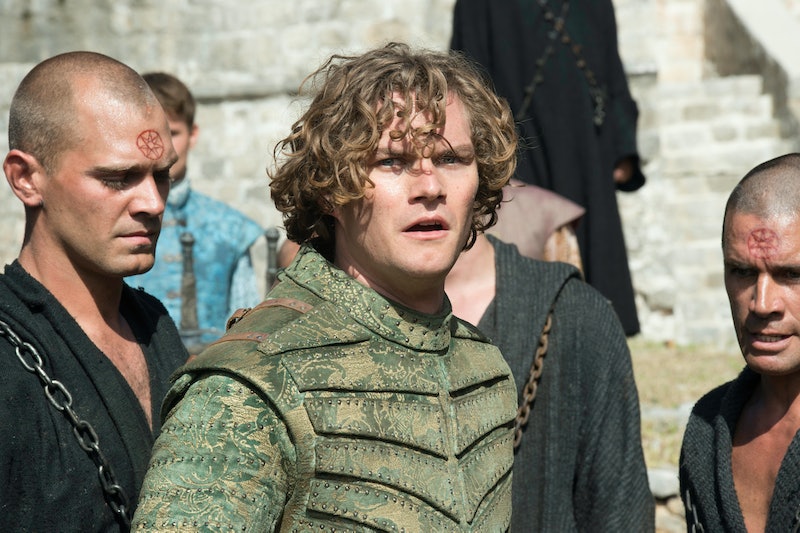 Book readers were thrown for yet another loop this past Sunday, when Game Of Thrones show runners David Benioff & D.B. Weiss went off script and had Queen Margaery's brother Loras arrested by Lancel Lannister and the Faith Militant. This particular development is nowhere to be found in George R.R. Martin's novels, which makes it hard to predict what's coming next for the best swordsman in the Seven Kingdoms. Those who have read the source material and the non-readers alike are all in the same boat, wondering what will happen to poor, imprisoned Ser Loras Tyrell.

When Cersei armed the Sparrows and re-instituted the Faith Militant, a long-abolished organization, the first thing they did was raid the brothels of King's Landing, taking particular umbrage with those patrons engaged in homosexual activities. Earlier in the season, we saw Loras treating his sexuality with uncharacteristic nonchalance, shrugging and saying that everyone already knew the truth. We should've known that would come back to bite him.

And bite it did. The whole reason Cersei gave the greenlight to the psychotic Sparrows was so she could get one-up on Margaery in their ongoing war over Tommen and the queenship — and her plan worked like a charm. (For now, at least.) Loras is in prison, Margaery is pissed, and poor Tommen doesn't know how to make peace between the two women in his life. (Book spoilers to follow!)

While this turn of events is a fabrication by Benioff & Weiss, it does parallel some plot points from the books. In A Feast For Crows, it's Margaery herself who is arrested by the Faith Militant, on accusations of infidelity. Since book-Tommen is about nine years old, which means his marriage to Margaery goes unconsummated, and his queen's virginity is relatively easy to determine. But since Tommen was aged up for the show, he and Margaery were able to complete the bedding ceremony on their wedding night, putting a wrinkle in this particular plot point.

So the question is: Did Benioff & Weiss have Loras arrested instead of Margaery? Or will they devise another reason for Cersei to put Tommen's new bride behind bars, ending Season 5 with both Tyrell siblings in jail?

Whether his sister joins him or not, Loras is definitely in mortal peril — not only because of the zealous Sparrows, but because his book counterpart is as well. In A Feast For Crows, Loras brashly volunteers to lead an assault on Dragonstone... a battle that ends with the Kingsguard on his deathbed, grievously wounded by arrows and boiling oil. As of A Dance With Dragons, Loras hasn't perished yet, but he's teetering awfully close. (Or so the reports say; we never actually see him again post-Dragonstone.)

While the circumstances that led to Loras being on the brink of death are decidedly different in the books and on the show, that doesn't necessarily preclude the end result from being the same. And given this glimpse in the Season 5 trailer of what looks like Loras lashing out against Olyvar while his former bedmate testifies against him at trial...

...Loras is indeed in a precarious position.

Of course, there's also the popular fan theory that the unseen dying Loras is actually a ruse, that the knight is fine and he's actually in hiding somewhere — referred to as the Grand Tyrell Conspiracy. Whether or not that hypothetical storyline makes it into the show is an even bigger question mark. But if, for example, we were to hear about Loras getting executed by the Faith without actually seeing it happen, we should all probably take that with a healthy dose of skepticism.