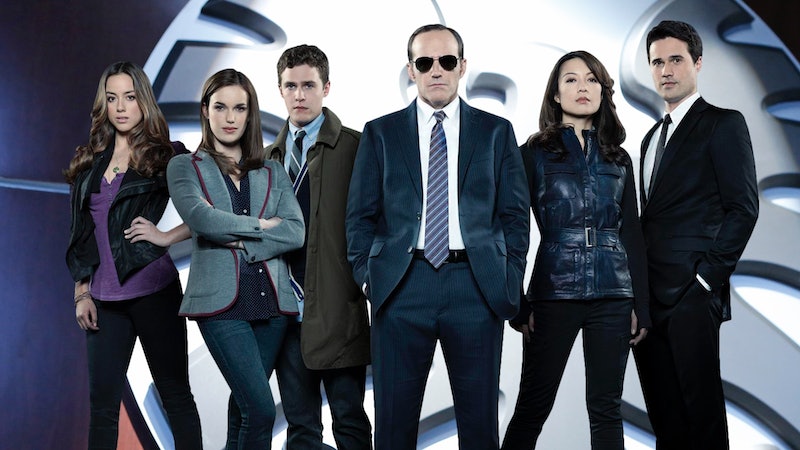 This is sad news for those of us who were looking forward to seeing the Marvel universe expand even further. It turns out that ABC has decided that Agents of S.H.I.E.L.D. will not be getting a spin-off show after all. I've been living in a permanent haze of excitement after the news that Agent Carter was renewed for Season 2, but fans of Agents of S.H.I.E.L.D. are likely incredibly disappointed that the show's expansive universe won't be explored further with a second show. Especially considering the Agents of S.H.I.E.L.D. spin-off would have starred Bobbi Morse, the fan favorite character known as Mockingbird, as well as Lance Hunter.

While this is certainly terrible news for those who wanted to see even more of those characters, it's not the worst thing that has ever happened. There's a lot of good news that comes with this blow as well. Agents of S.H.I.E.L.D. has already been renewed for a third season, one which will no doubt feature more Mockingbird since she won't have to be written off to lead another series. ABC has also decided to give another season order to Agent Carter, which is basically a prequel to Agents of S.H.I.E.L.D. considering the show details the events that led to Peggy Carter forming the organization to begin with.

But, if you're not a fan of Agents of Carter, and this lack of an AoS spin-off is the most devastating news you've heard since The CW decided not to go forward with the Supernatural spin-off, then I am here for you. I am here to hold your hand. I am here to give you some ways to get through your misery over the lack of spin-off. You're welcome.

The first step in accepting bad news is always to allow yourself to feel how bad it is. Usually by crying. Usually with ice cream. There were a lot of people who were genuinely excited at the prospect of a second AoS show, and now those people are probably in a dark corner, curled into a ball, sobbing into their knees. You might even be one of those people. Allow yourself to feel the pain.

Marathoning Agents of S.H.I.E.L.D. from the beginning might help heal some of those wounds. After all, it's worth remembering that those who opposed the idea of a spin-off opposed it because they didn't want Lance and Bobbi to leave the main show. Watching them join the team and become fan favorites all over again might help you realize this temporary setback is really more of a gift.

But maybe even that's not enough to heal your broken heart. Thus, maybe it's time to open up Twitter or Tumblr or Facebook and meet up with other fans who are sad that there isn't going to be a spin-off. Liking the same thing can bring people together, but being upset about the same things usually earns you a friend for life. Funny how human nature works.

Once you've made a friend who is as sad as you are, rewatch AoS again. Or, hey, watch Agent Carter, because that's getting a Season 2. I wonder how many times I can get away with mentioning that. The point is, there is so much Marvel media at your fingertips to rewatch that, by the time you're done, missing out on one more won't seem so bad.

By this point, you should be emotionally ready to deal with the fact that there isn't going to be an Agents of S.H.I.E.L.D. spin-off. I mean, you've had the ice cream, you've rewatched the show, and you've even made a new friend out of the deal. Let's look forward into the next season of AoS, and even more Lance and Bobbi Morse, on the show that helped us fall in love with them to begin with, shall we?