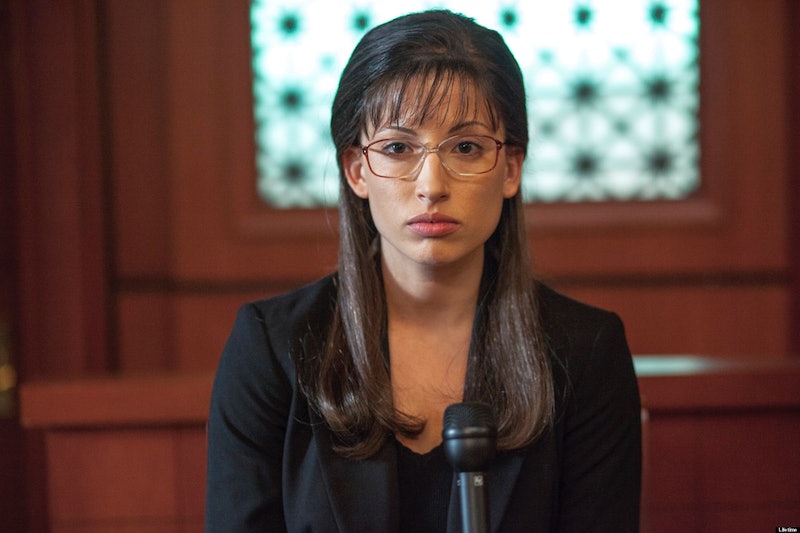 Chicks, amirite? First they're following you into the bathroom, then they're stabbing you in the shower.

Except that no one does that, unless you're Jodi Arias in the Lifetime movie Jodi Arias: Dirty Little Secret.

The movie follows Jodi Arias and her relationship with her victim, Travis Alexander, her ex-boyfriend who was killed in 2008. Jodi was convicted of first-degree murder just last month after an extremely weird and highly publicized trial where Arias and Alexander's phone sex conversation was played in court and Arias was taped standing on her head, digging through the trash and singing Dido's "Here With Me" while waiting to be interrogated.

Clearly, this kind of trial was made for a Lifetime movie. But it's hard to develop a good narrative from a movie where the murderer claimed her only motivation was self-defense, so the movie goes with a "crazy girlfriend" narrative. As a result, there's a lot of "he should have seen it from the beginning" signs put in the movie that were never in the trial: while Arias says that it was Alexander who introduced himself to her, in the movie she follows him to the men's bathroom to introduce herself. And while Arias testified that he initiated their physical relationship, in the movie she comes on to him. While this kind of behavior makes her come off as "clingy" and "desperate" and makes her motivations easier to understand, if she had really introduced herself in the bathroom, there's no way Alexander would've continued their relationship. The movie also glossed over Arias' testimonies that Alexander was a pedophile who sexually degraded Arias -- according to the Lifetime movie, Arias is the more sexually dominant partner who aggressively pursued Alexander.

This is not to say that these things are not true of Arias -- the point is that we don't know either way. Arias was convicted in May, so of course it still hasn't come to light what was and was not true in her testimony. Fast tracking a movie based in facts forces writers to overlook some facts and create a cohesive story where there was none. And to push the "crazy girlfriend" trope off on Arias not only furthers the myth that women who are "too agressive" must be crazy, but it turns a woman who was truly mentally disturbed into another sitcom trope.

More like this
What Makes A Sally Rooney Sex Scene So Hot?
By Samantha Leach
Shocked Fans & Former Co-Stars React To Ray Liotta’s Death At 67
By Grace Wehniainen
'Stranger Things' Star Joe Keery Is Dating An "Indie Scream Queen"
By S. Atkinson and Grace Wehniainen
Everything To Know About Marvel’s 'Thor: Love And Thunder'
By Grace Wehniainen
Get Even More From Bustle — Sign Up For The Newsletter