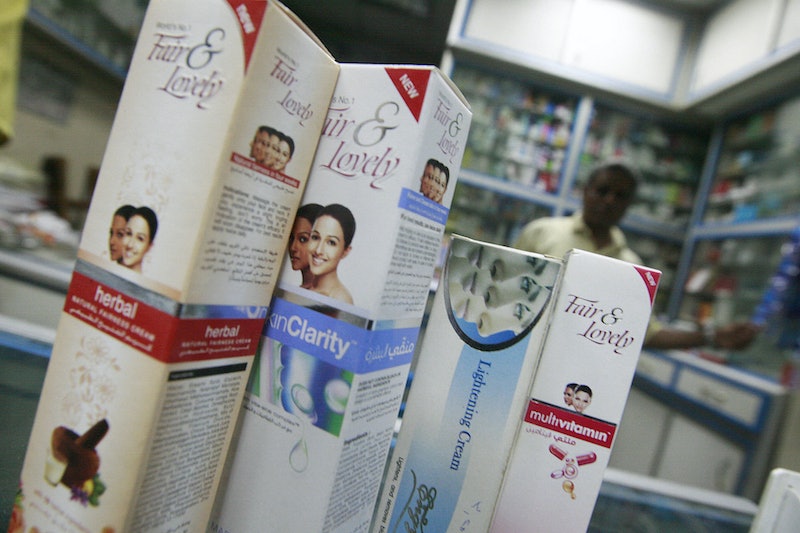 The Ivory Coast has enacted a new ban on skin whitening creams, which happen to be some of the most popular beauty products in the country. According to The Guardian, hydroquinine is a lightening chemical that is often used by photographers to lighten photographs and studies show that these creams can lead to potentially deadly health problems, such as skin cancer, hypertension, and diabetes.

Because of these health concerns, the country's health ministry has banned their sale and use. "Cosmetic lightening and hygiene creams... that de-pigment the skin... are now forbidden," the health ministry said in a public statement.

Skin bleaching creams have become an ever-present trend among African men and women, as well as in some Asian countries. Stemming from a (literally) "white-washed" standard of beauty, these whitening creams contain dangerous chemicals like mercury and hydroquinine to lighten and depigmitize one's skintone. Seriously guys, you don't want this stuff on your face.

“In our cultures, some people think women with light skin are the most beautiful. This beauty standard... pushes many girls to depigment their skin,” Elidje Ekra, a dermatologist in Abidjan, told The Guardian. “What we see in the media is the lighter one’s skin is, the better one’s life,” he explained.

I should point out that people have done crazy things in the name of beauty for a very, very long time. During the Elizabethan era, women would cover their faces with cakey, white powder because having lighter skin was a sign that you were wealthy and didn't have to work outside as a laborer. Eventually they realized that the powder actually contained a deadly carcinogen and was highly dangerous.

Regardless of a cultural tradition, when a beauty ritual leads to physical harm it becomes clear that beauty standards can be just as toxic as those whitening chemicals themselves.

More like this
TikTokers With Eczema Are Opening Up About Topical Steroid Withdrawal
By Kui Mwai
9 Celebrity Couples With Matching Tattoos
By Jordan Murray
12 July 4th Beauty Sales To Jump On ASAP
By Jordan Murray
Yes, You Can Buy Off-White’s New Beauty Range In The UK
By Tomi Otekunrin
Get Even More From Bustle — Sign Up For The Newsletter