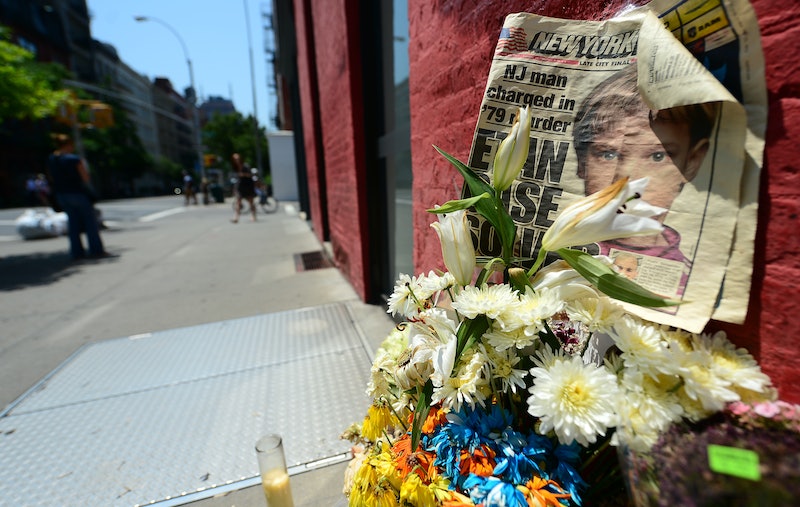 One of the longest-standing, most prominent missing child cases in modern American history is still unresolved, and it sounds like it won't see a resoluton anytime soon. A mistrial has been declared in the Etan Patz case, as a jury of five women and seven men were unable to arrive at a verdict. It means that 54-year-old Pedro Hernandez, the defendant who had been charged with abducting and killing the Manhattan 6-year-old, will go free, at least for the time being. It's now up to prosecuting authorities to determine whether to push forward with the case, in light of the jury's inability to convict on the existing evidence.

Patz's story is, of course, tragic — beyond even losing a child, his family hasn't been able to receive any legal closure in the case for a staggering 36 years — if Etan were alive (he was declared legally dead in absentia back in 2011), he'd now be 42.

The case also galvanized public attention, and gave way to a method of publicizing child disappearances that was a staple of American life for decades — the picture on the back of the milk carton. Patz was the first child to ever be feature on a carton this way, the most primitive early version of the child disappearance protocols that exist today, like the AMBER alert.

It'll be interesting to see whether District Attorney Cyrus Vance will attempt to try this case again, because it sounds like the jury did their damndest to reach a verdict and simply wasn't able to — the mistrial was declared after 18 days of deliberations, 11 of the jurors believed he was guilty, according to NBC, while a twelfth was unable to reach that verdict. USA Today quoted Vance, who in spite of the setback reiterated his belief in the charges.

We believe there is clear and corroborated evidence of the defendant¹s guilt beyond a reasonable doubt. The challenges in this case were exacerbated by the passage of time, but they should not, and did not, deter us.

The case against Hernandez hinged on an alleged confession his brother-in-law reported to the authorities in 2012, and a subsequent confession he made to the police. Hernandez told the police that he drew Patz into the basement of a store he worked at with the promise of a soda, then choked him to death. His defense insisted this was not true, just an under-pressure fabrication by a mentally ill man after hours of questioning.

And in absence of corroborating physical evidence, of which none was found, it seems that reasonable doubt won the day.

More like this
What Is Happening With Sheku Bayoh’s Case?
By Sophie McEvoy
The Most Powerful Photos From The Weekend’s Abortion Rights Protests
By Melanie Mignucci
Where Is Oscar Torres In 'Only Murders In The Building' Season 2?
By El Hunt
The “Beatrice Six” Were Awarded $28 Million After Their Wrongful Convictions
By Brad Witter
Get Even More From Bustle — Sign Up For The Newsletter