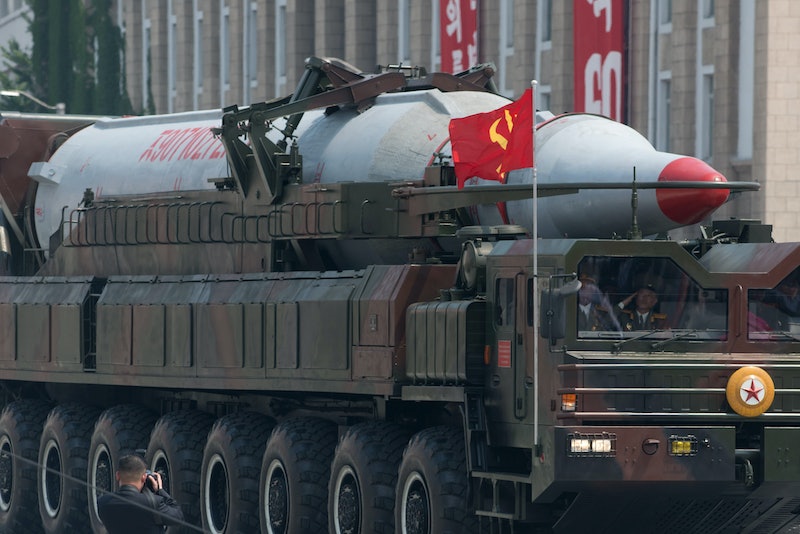 The Korean Central News Agency (KNCA) reported late on Friday that the country's military leaders had successfully tested an underwater missile. The agency also reported that North Korean leader Kim Jong Un had personally overseen the event, which supposedly took place at an unknown date earlier this month. According to military officials, the missile was launched from a submarine in a region far removed from the mainland.

Kim reportedly lauded the test as a precursor to a much bigger threat for North Korean enemies. The report out of KNCA stated that Kim had called the missile a "miraculous achievement" and claimed that his country was "capable of producing this type of missile" on a widespread scale. He also praised the military for creating a "world-level strategic weapon."

Business Insider pointed out on Friday evening that the test potentially violated the U.N.'s resolutions prohibiting the country from conducting military trials like the one held this weekend. Further development of a "submarine-launched missile capability" was not only a real concern, it would arguably "take the North Korean nuclear threat to a new level, allowing deployment far beyond the Korean peninsula," reported the website.

KNCA reports claimed that after being deployed by the submarine, the "ballistic missile soared into the sky from underwater."

The new weapon was touted as a "time bomb which will go off on the backs of our hostile enemies at any time," said Kim.

Earlier satellite imagery had shown what military officials believed to be a submarine with capabilities of launching either "either ballistic or cruise missiles", reported Philippines news agency GMA and the AFP.

On Thursday, North Korea warned that it would not hesitate to fire on South Korean naval vessels, which military officials claimed had crossed into North Korean waters.

"From this time on," stated commanders in a report out of KNCA, "there will be unannounced targeted strikes against puppet navy vessels that violate our military's maritime border in the west coast hotspot waters."

South Korean leaders called the allegations and resulting threats bogus and unfounded, indicating that none of their ships had infringed on territorial waters since the end of the Korean war in 1953. They warned North Korean officials against seeking out conflict, saying that the country would "regret to the bones if it ever ignores our warning and wages provocation."

Since its first reported nuclear weapons test in 2006, North Korea has jumped back and forth between feigned diplomacy and outright hostile aggression toward South Korea, the United States, and any other country it perceived as an ally. In 2009, following then-leader Kim Jong-Il's stroke (which left him out of the public eye and gave rise to a plethora of questions regarding the stability of the country's leadership), military officials ordered yet another underground nuclear test, which although successful, caused variable seismic activity throughout the region, forcing several schools to be evacuated.

After Kim Jong-Il's reappearance and subsequent re-election, government leaders launched what they alleged was a satellite-bearing, celebratory rocket into the atmosphere, despite warnings from both the United States and other opposition forces who claimed the launch was actually a missile test. The New York Times that month called it an "increasingly confrontational posture" toward U.S. military officials and South Korean leadership.

The latest missile test has proven more concerning than ever, given intelligence reports that support the possibility of ramped-up military capabilities on the part of the North Korean navy. However, the US-Korea Institute at Johns Hopkins University indicated last October that, despite the technological advances, "Pyongyang was likely years from achieving the required technology" to actually provide the country with a reliable second-strike nuclear capability.