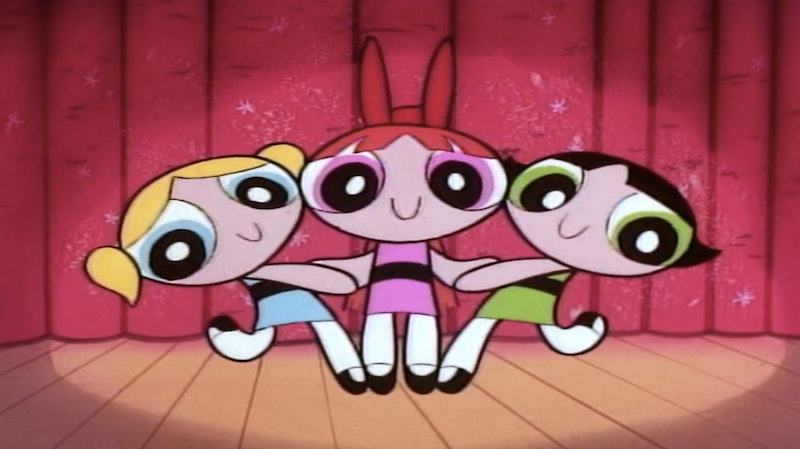 We're a pro-Powerpuff Girls publication here at Bustle, as the highly adorable show formed many of us into budding baby feminists. Indeed, the world is a better place thanks to Blossom, Bubbles, and Buttercup, and their efforts to fight crime before bedtime. So as we sit tight for The Powerpuff Girls revival slated for 2016, I think it's highly appropriate to look back at the very first PPG cartoon.

But first, let's ask ourselves: what constitutes the first Powerpuff Girls cartoon? Is it the Craig McCracken student short, The Whoopass Girls, in which the trio was birthed from an aged Dexter from Dexter's Lab and a can of whoopass? Or is it the first OFFICIAL Powerpuff Girl cartoon, a nondescript episode that features a cockroach-themed villain? After careful consideration, I decided on neither. The first Powerpuff Girls cartoon that I remember was the What a Cartoon! short, Meat Fuzzy Lumpkins. And because I'm sure you also have fond memories of drumstick hair and Bubbles' first attempts at going "hardcore," that's what we'll be revisiting.

So get ready, Powerpuff fans. In chronological order, here's some of the most notable, bizarre, and notably bizarre things from our initial introduction to the Powerpuff Girls.

1. The exquisite of-its-time bubble letters used in this opening.

Didn't everyone spend 3rd grade math doodling your name in that font? I mean, fractions were HARD, guys.

2. THE MALL OF TOWNSVILLE.

Kind of seems like an out-of-place feature for a city, but it was always implied that Townsville had a suburb. That's where Pokey Oaks kindergarten was, right? And the girls lived? Someone please confirm this?

Definitely not the mustachioed munchkin that runs Townsville in the real series, but we'll get to that.

4. When Buttercup is introduced she punches the air.

In-character, but that's kind of an abrasive first impression to give people. She must not do well on job interviews.

But who also poses like that? Is this how girls on Instagram pose these days? Please say yes.

"Nearly intelligent" used generously because Fuzzy Lumpkins is traditionally a bumbling idiot. Also, what even IS Fuzzy Lumpkins? Cleetus the Slack-jowled yokel meets an episode of When Muppets Attack? Someone please enlighten me.

He entered MEAT JAM into the jam competition. Revolting as it may be, I almost feel as though he should win just by managing to create that.

8. Unfortunately he loses to this jam that has a face.

9. Despite eating three tons of jam, the girls are rail thin.

One of their special powers is super metabolism.

-me when the land line starts ringing

So Fuzzy created a Meat Ray Gun, which is own its own a ridonculous concept, but what exactly happening here? Did he use it on a hospital? Why aren't the people transformed as well? Why is there a GREEN PERSON in the corner?

However, I feel like this is where he probably had to leave office, as it's uncommon for a slab of steak to run the town. Pork chops, however, they really have a handle on politics.

14. They rebuild the town, but like, with cardboard, crayon, and scotch tape?

I get that they're five, but they realize people can't live in that, right?

15. ALL THE MEAT THEMED VILLIANS.

Actually shows up on the show later?!

The unparalleled best character in the series.

17. Weird pick for a flying sound.

18. When Bubbles gets meat hair.

Ugh, it's just one of those days when you wake up and your hair is a drumstick.

19. When Bubbles, possessed by Satan, lays the smackdown.

Side bar, if Professor Utonium was trying to create the perfect little girl, why was nose and fingers left out of the "perfect" equation?

20. And finally, when they hit Fuzzy with the Meat Ray and divide his carcass to be eaten by the entire town.

More like this
“The Door Is Always Open” For Another 'Breaking Bad' Spin-Off, Says AMC Boss
By El Hunt
Emma Thompson, Lashana Lynch, & Stephen Graham Lead Netflix’s 'Matilda'
By Sophie McEvoy
‘Stranger Things’ Spin-Off Will Not Be What You Expect
By Catharina Cheung
10 Iconic Erica Sinclair Quotes From Stranger Things That Steal The Show
By Sophie McEvoy
Get Even More From Bustle — Sign Up For The Newsletter