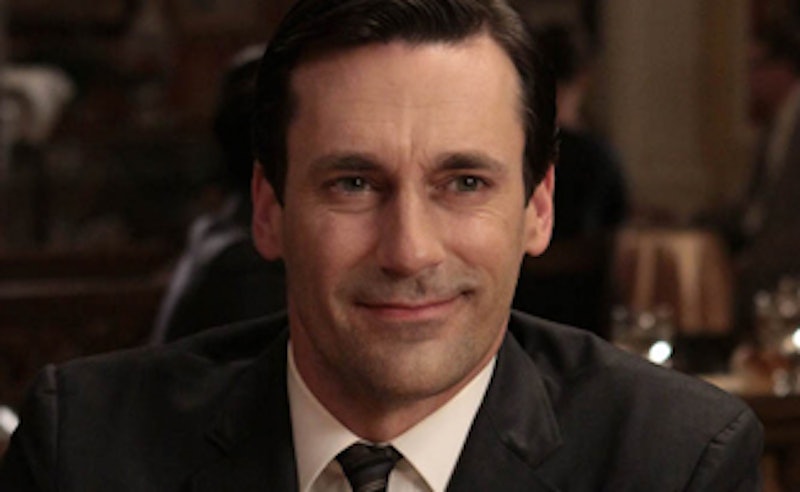 As the AMC series, Mad Men, draws to a close, I have come to the conclusion that it's high time for our favorite brooding protagonist to make a change. I'm speaking, of course, about one Mr. Don Draper. Throughout seven seasons, we've witnessed Don's triumphs, tumults, and varying attempts at personal satisfaction. During last week's episode, Don fled New York City — and several work obligations — to search for Diana, a troubled waitress we were introduced to only a few episodes ago. With SC&P having been absorbed by what we're coming to learn is a rather suspect company (how could you do that to Joan, McCann-Erickson?!), it seems to me that ending the series with Don headed down a different career path would be fitting. The incessant brooding says it all: Don isn't super happy with his job.

A change in scenery could turn a frown upside-down, and I could personally use more showcasing of Don's pearly whites — the man has a gorgeous grin, am I right? Beautiful smiles and chiseled jaws (teehee) aside, Don has already accumulated several skills in advertising that make him a great candidate for various fields. He's needed to hone creativity, create campaigns, and showcase deft skills in public speaking. Let's take a look at some different professions Don may be interested in exploring.

We've all seen Don nail it when it comes to making presentations and swaying the most elite of clientele to sign on with SC&P. Lawyers have to do plenty of convincing as well, so maybe Don would find this occupation to be on fleek. And no, I don't think he would have any idea what the term "on fleek" meant if I proposed this idea to him.

Don has plenty to write about, and we've seen him be quite the wordsmith in and out of work.

Don understands the complexities of people — he's pretty complex himself! Maybe he could put his litany of lessons learned (how was that for alliteration?) to use by bestowing his accumulated wisdom onto others.

Film critic? Food critic? It doesn't really matter. After all his marketing prowess, one thing is for certain: Don knows how to offer up a review.

Things are always so intense for Don. Perhaps moving in a completely different (albeit, cute and cuddly) direction would be a pleasant change of pace.

Don could teach aspiring youths about the world of advertising — he's got a ton of insight!

Don used to be married to an actress, and also vetted various performers to help with advertising campaigns. He's gotten a glimpse of what goes into the process, so why not? Like acting, the world of advertising calls for creative minds, so Mr. Draper would fit right in.