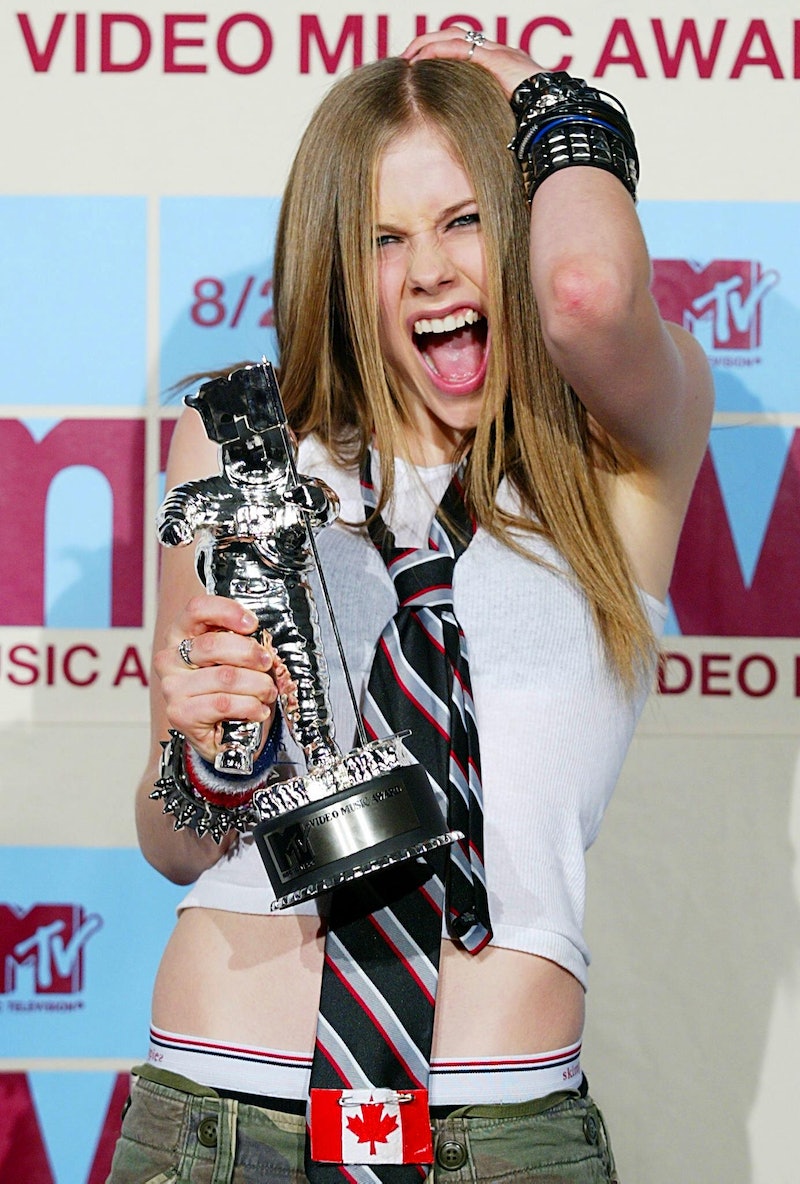 In the early noughties, Avril Lavigne released her hit son "Sk8er Boi" and alternative teen fashion evolved across the globe. Skater girl fashion was on the up, and it hit my group of friends and I in a tidal wave of studded accessories and rainbow-streaked hair. Skater style was, arguably, a reaction to musicians like Avril Lavigne and their angsty, teen pop tunes, but she was the movement's poster girl.

It all started with the mainstreaming of the pop punk genre, thanks to bands such as Green Day, Sum 41, and Blink 182. These rocking boy bands were accessible to the masses as they weren't as extreme as the punk culture of the 1970s. The pop punk boys made fun, upbeat songs that were just different enough for the popular kids to stray away from and their videos included "rebellious" acts such as skateboarding.

These bands allowed my friends and I an outlet to discover who we were while also allowing us to believe (to a certain extent) that we were different, unique, and weren't fitting into the mainstream image of an "average" teenager who listened to Christina Aguilera and hung out at the mall all weekend shopping for pink skirts á la Mean Girls.

Luckily, our school was a really nice, small institution, so although we had our own clique and were different from the majority, we weren't bullied because of it. In fact, we somehow managed to float among everyone and we weren't labelled as "geeks" or "cool kids" — by the way, I hate those terms — and we just coasted along being friends (or at least on speaking terms) with everyone. So in some ways, we have the skater kid culture to thank for that.

So after the popularity of the aforementioned boy bands, Avril Lavigne hit the scene and solidified skater style. And, most importantly, made it accessible to girls. She wore key items that we could find lying around the house or pick up very cheaply from a store with our pocket money. She taught us how to accessorize. So in honor of Avril, and all former skater kids out there, here are a selection of items every former skater kid had in their wardrobes...

The skater version of the combat trouser, these weirdly-named octopus pants were the height of skater fashion. Obviously the strips were meant to look like tentacles, but as far as I'm aware, I don't think there were eight on each side. I had a pair of these in an embarrassingly standout dark fuchsia shade and possibly some in dark green, too. As much as I enjoyed this period of my life, I am so glad these trousers are in my past.

As a gangly, long-limbed, fast-growing teen, I had quite big feet for my age. So Vans were perfect to disguise my large feet and make them generally more rounded and less elongated. I had a pair in black with baby pink detailing, which I loved pairing with a dress in the same color scheme to rock a matchy-matchy, feminine vibe. Later, we ditched this iconic skater style for the classic Vans trainers; a favorite being the checkerboard patterned ones.

3. Anything Emily The Strange

Emily the Strange was adored by skater girls everywhere. She was dark, morbid, and had buckets of black humor. She was also quite the little feminist on occasion. You could get any number of Emily the Strange items, from hoodies to bags.

For some bizarre reason, sweat bands became really popular. Maybe it was to catch the sweat created from jumping around in mosh pits, but I think the real reason was to show off who your favorite bands were with an easy, cheap accessory.

I have always been a huge fan of Asian illustration, cartoons, and animation. I think it started with Hello Kitty in my childhood, moved on to Sailor Moon and Pucca in my teen years, and finally settled on Studio Ghibli in my adulthood. I had a collection of Pucca t-shirts and I'm not quite sure how or why this lovesick Korean girl became synonymous with the skater scene, but she was a huge hit.

These rubber bracelets came out of nowhere and were available in a rainbow spectrum of colors. You didn't care about matching them to your outfit, you just wore as many as you could. And if a boy gave you one of his, your heart fluttered because it meant he had a crush on you.

Any tie would do, but one in a grunge color scheme or in neon shades would be the best find. You would literally put it on top of your favorite band t-shirt à la Avril Lavigne and off you went.

Of course one's outfit was not complete without black nails. However, the nail varnish must be worn chipped in the style of the guys from Good Charlotte.