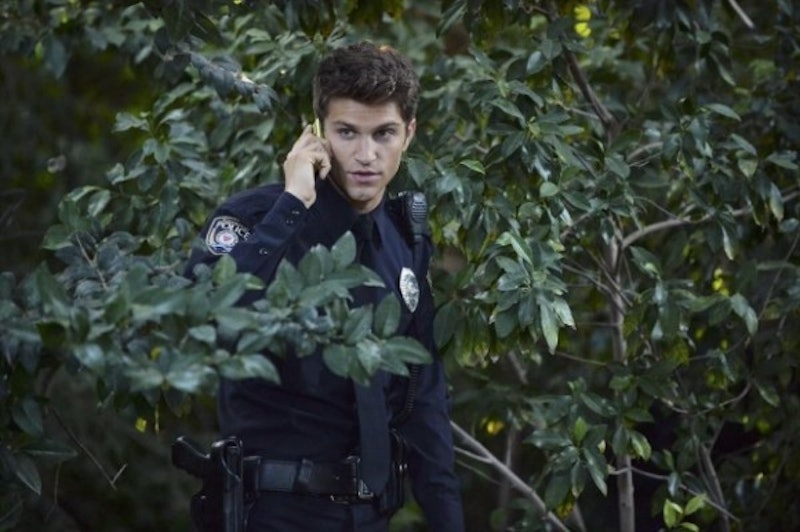 If you think Pretty Little Liars can continue on without delivering a few heart-crushing deaths along the way, then clearly you haven't been paying attention these last five seasons. This series prides itself on making bold, shocking choices that can sometimes come at the expense of a character's life. And while some of those deaths managed not to stick (looking at you, Mona!), I have a feeling we won't always be so lucky when it comes to some of our beloved residents of Rosewood. In fact, I keep having this nagging, awful feeling that Toby will somehow die on PLL by the end of the series. What makes me make such a horrible prediction? Well, for starters (BOOK SPOILER ALERT), Toby dies in the books.

That's right, folks. Believe it or not Toby does not make it very long in the Sara Shepherd novels. After thinking that Emily knows his secret about his former romantic relationship with his sister Jenna, Toby panics out of shame and regret and ends up overdosing on pills out in the woods. And just like that, Toby is no more. Obviously the TV show has smartly opted to veer off track in regards to this particular storyline. (#TeamSpoby4eves) But that doesn't mean the writers won't eventually circle back to his destined book fate. It would probably be under completely different circumstances, but that doesn't change the fact that it could still happen.

Then there's the fact that PLL has already foreshadowed Toby's grim fate. Remember back when Spencer kinda went off the deep end and got shipped off to Radley? Well, do you remember what she saw (or at least what she thought she saw) right before that happened? She found what looked to be Toby's body out in the woods. (Hmm, Toby's dead body out in the woods. Does that sound familiar, book readers?!?!)

Though she never got a look at the person's face (they were wearing a motorcycle helmet at the time), she did spot Toby's trademark tattoo “901 Free at Last" on the body right before she ran off. Was this simply another trick courtesy of A or was this the show's way of hinting at what's to come?

Of course, I'm not even necessarily convinced that Toby isn't already dead. As I've mentioned in a previous post, I think there's a chance that Charles killed Toby that night and has been impersonating him ever since. (This is tied to the theory that Charles and Toby are twins, obvs.) So, if that's the case, then the show has stuck closer to the books than any of us have ever realized, at least in regards to the real Toby's fate.

I mean, just imagine how blown your minds will be if that turns out to be the case. Not only will we have gone YEARS without mourning the loss of sweet, innocent Toby, but we'll have witnessed Spencer in arms of ChArles himself. I think Keegan Allen sums it up perfectly here…

But whether I'm right or completely off-base about this, the odds still don't look to be in Toby's favor regardless. He continuously places himself at the center of A's radar. Sooner or later it's bound to catch up with him, especially given his position at the police department. If all of his detective work becomes a big enough threat, A could get angry enough to kick him out of the game… for good.