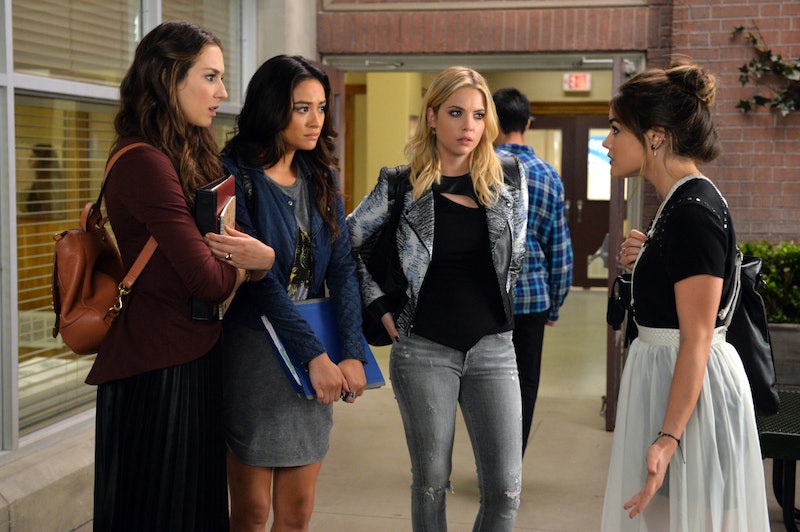 Good luck trying to get any work done today, PLL fans, because we are now mere hours away from finally seeing the Big A reveal at long last. But don't let this pending reveal be misleading — this series will undoubtedly provide us with yet another big mystery to solve as a way to help spur the plot forward for Seasons 6 and 7. However, those hoping to get a little taste at what's to come will have a hard time finding Season 6 spoilers in the Pretty Little Liars books. Those of you who are long-time readers of the Sara Shepherd novels know that the TV series is vastly different from the books, so much so that if the names weren't all the same, you'd have a hard time believing they were ever supposed to be based on the same set of Rosewood High best friends. Update: We now know that Pretty Little Liars Season 6 premieres June 2.

Basically, what I'm trying to say here is that, at this point in the game, searching for spoilers in the confines of those pages is like trying to locate that proverbial needle in a haystack. The show and its writers have simply strayed too far to make most predictions anywhere close to plausible. But just to give you a better idea of just how far removed the franchises are from one another (I know how desperate we PLL fans can get for spoilers), I've decided to go ahead and highlight some of the main differences in the books that is nothing like the on-screen Rosewood we've come to know and love.

I don't want to live in a world without Caleb. Just think of all the times he's helped the Liars out throughout the years. None of it happened in the books, which means Haleb never happened and life as we know it no longer has any meaning. As great as I'm sure the books are, PLL without Caleb is a PLL I just don't want to know.

Emily Has A Baby

In the books, Emily realizes that she's bisexual and sleeps with a guy named Isaac, which results in her becoming pregnant and eventually giving the baby up for adoption. Oh, and remember Paige? Yeah, she doesn't exist in the books either. (Seriously, what is this life?)

Given all the evidence to the contrary, I think it's safe to assume that Ali is not A in the TV version (though, we should be able to know for sure soon enough). However, in the books she is the main culprit behind the Liars' torment. And, of course, the whole twin factor comes heavily into play in the books when it's revealed that Alison was the one trapped in the mental hospital, not Courtney, who she later kills out of revenge. As we all know by now, a twin theory will come into play eventually. It just won't involve Courtney. (Charles DiLaurentis anyone?)

So there's no Haleb, no Paily, and now no Spoby? So basically all the good 'ships are null and void in the books, I guess. Also, this will especially not match up with the series if Toby ends up being A (which hopefully won't be the case because OMG).

You said it, Spence. Add this crazy off-shoot to the growing line-up of differences.

As you can see, given all of these changes the show's already made, there's simply no way to predict what will happen next — whether you're a fan of the books or not. But isn't it kinda more fun that way?