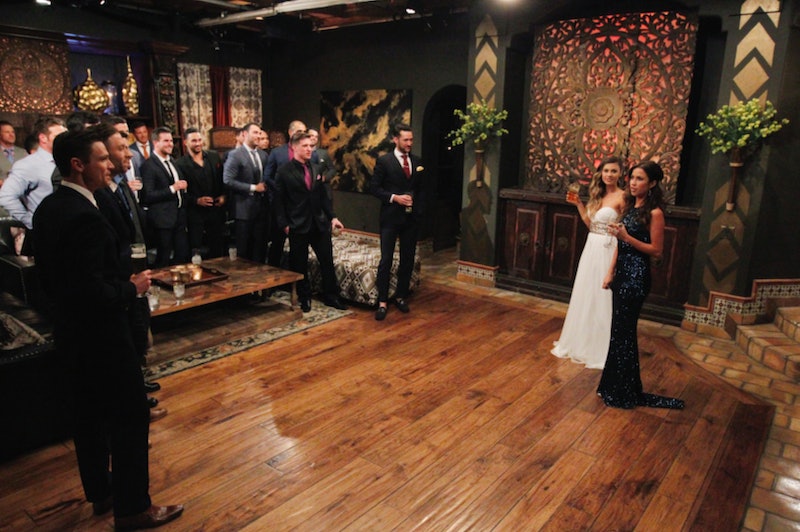 The newest season of The Bachelorette is only a week away, so the time has come… to lip sync… FOR YOUR LIFE! Oh, wait. Wrong show. The time has come… to read... THE BACHELORETTE BIOS! Monday, ABC.com uploaded the profiles of the 25 suitors hoping to woo Britt Nilsson and/or Kaitlyn Bristowe (side bar: I really, really hope Chris Harrison announces at the end of the first episode that neither Bachelorette is going home. If you're going to switch up the format, commit to it, dangit!), and I happily spent my A.M. poring over every first date fear and job title (amateur sex coaches and former investment bankers and junkyard specialists! Oh, my!).

However, when I took a look at the group shot of all of the grinning contestants, I rolled my eyes and groaned. I did not groan at the smiles; I like smiles. I groaned at the lack of diversity. The Bachelorette Season 11 cast is very white. Just like Andie Dorfman's season, Emily Maynard's season, oh, and every other season of the Bachelor spinoff, we have before us a blue-eyed, brown-haired bro smorgasbord. Bustle reached out to ABC for comment, which replied with: "We won’t be commenting further on the diversity of the upcoming season of The Bachelorette."

While this is not surprising — The Bachelor franchise has been criticized for its lack of diversity for years — it is disappointing. As BuzzFeed's Whitney Jefferson points out, in the first six installments of The Bachelorette, there was at most one non-white contestant per season. And as for the rest of the series? According to an infographic created by artist Karen X. Chang, Season 7 featured zero people of color. Season 8? Two. Season 9? Six. And Season 10? Three.

(Chang mentions that Season 9 happened on the heels of the discrimination lawsuit that was brought against The Bachelor. Did the case — which was eventually dismissed — influencedthe casting decisions in any way? It's a question worth posing.)

Back in January, ABC President Paul Lee addressed this very issue at TCA. According to The Los Angeles Times, Lee promised more diversity in future iterations of the franchise. And technically, he has yet to break his promise: The Kaitlyn/Britt season is more diverse than the most recent season of the franchise. Out of the 30 women hoping to be proposed to by Season 19 Bachelor Chris Soules, only one woman was black, whereas in the upcoming season of The Bachelorette, four out of the 25 gents vying for Britt/Kaitlyn's affections are men of color.

Yes, The Britt/Kaitlyn season is less overwhelmingly white than previous seasons, but only by a sliver. With regards to diversity, the show is making progress at a glacial pace. And hey, just because it is a fluffy dating reality television program doesn't mean it can be let off the hook for issues like this; the franchise still has some serious work to do.