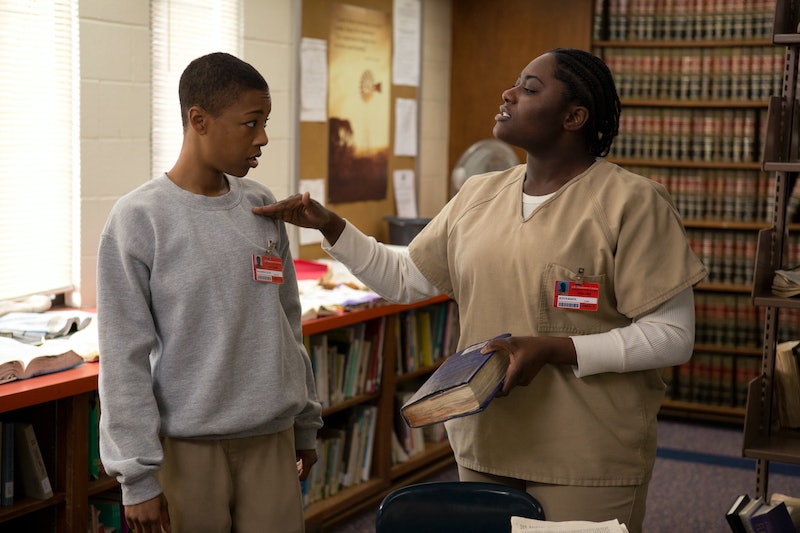 There are many different relationships to fall in love with on Netflix's hit series Orange Is the New Black . Yet the friendship that exists between Poussey and Taystee has always been exceptionally near and dear to my heart. Maybe it's because they're both just hilarious together. Or perhaps I simply like the thought that, even in a world full of hook-ups, break-ups, and cat fights, you can still have your bestie to lean on. But could this ever bloom into more than just friendship? Could Poussey and Taystee actually become a couple on OITNB Season 3? According to a recent chat I had with Samira Wiley herself, the idea shouldn't be taken completely off the table.

"Well, I think that last season was such a hard season for [Poussey]," Wiley told Bustle. "She was really down and alone for almost the entire season. At the end she sort of rekindles her friendship with Taystee." And while she remained tight-lipped about any specific details, Wiley wanted to assure fans that things will start getting back to normal between this dynamic duo. "In Season 3 I’m looking forward to seeing them fall back into the relationship and how they were in Season 1 and what made everyone fall in love with them from the beginning."

Of course, Wiley is referring to the strain Poussey and Taystee felt in their relationship last season after Taystee was kicked out of Vee's gang as a direct result of Poussey's actions. (She'd made it her mission to sabotage Vee's tobacco enterprise.) Thankfully, the two finally were able to overcome Vee's meddling and make amends. But could their rekindled friendship now potentially blossom into something more? "In terms of where their relationship is going romantically, I know Taystee sort of put the breaks on it in Season 2," Wiley states. "But we’ll just have to watch and see."

That may not be a definitive yes, but it also wasn't a definitive no either. Granted, Taystee has made it pretty clear to Poussey that she doesn't feel that way about her. And while I do want to respect her decision, I also know that it doesn't hurt to keep an open mind since feelings sometimes have the tendency to change and progress over time. And now that Taystee's experienced what Litchfield is like without her friend being by her side, she may have developed a whole new appreciation for what they have together. So if you're out there 'shippers (and I know that you are!), I wouldn't give up on these two just yet.

However, even if romance isn't necessarily in the cards for them, I think we can all agree that it'll still be great to see these two back in each other's good graces and up to their old, goofy antics.

I also made a point of asking Wiley whether or not this highly talked about Martha Stewart-inspired character could potentially end up being Martha herself. Wiley wasn't sure yet who it would end up being, though after seeing her on Justin Bieber's Roast recently, the actress admitted she'd love to have Martha's comedic chops added to the ensemble. "She was so good. So judging off of that she’s got great comedic timing. We would love her!" You hear that, writers? Poussey has spoken! So let's make all of these things happen, shall we?

Orange Is the New Black Season 3 comes to Netflix on June 12.

More like this
Martin Hancock’s Wife Played A Key Part In His Return To 'Coronation Street'
By Catharina Cheung
Paapa Essiedu Likes To Keep His Relationship Pretty Private
By Maxine Harrison
John Mulaney & Olivia Munn's Relationship Timeline Features The Comedian's First Father's Day
By Jordyn Tilchen
Did *That* Character Really Die In The 'Stranger Things' Season 4 Finale?
By Grace Wehniainen
Get Even More From Bustle — Sign Up For The Newsletter