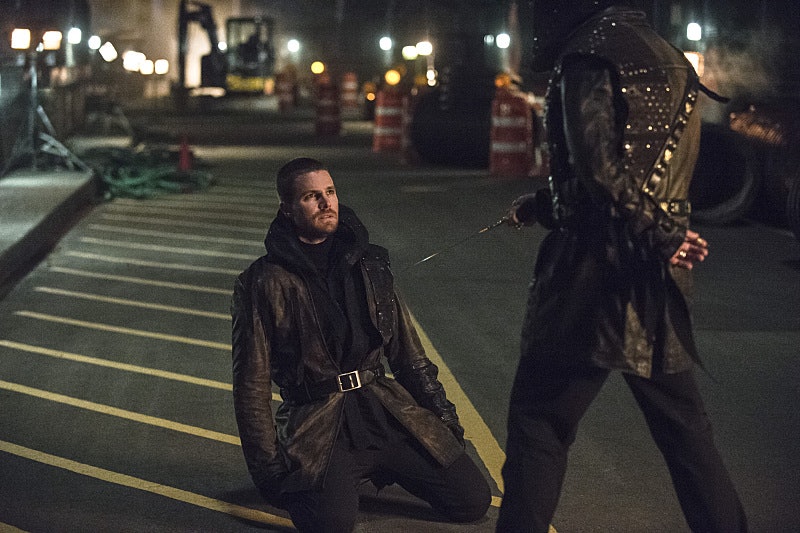 I think I can safely speak for everyone when I say that Oliver's actions as of late have been highly confusing. One minute, he's having secret meetings with Malcolm and assuring us that his whole Al Sah-Him identity is nothing but a ruse. But then, the next minute, he's dropping the deadly Alpha Omega virus into a jail cell full of all his friends. I mean, talk about mixed signals, right? So as we head into the Arrow Season 3 finale, there's one big question on everyone's mind: Is Oliver good or evil? And being the optimist that I am (at least when it comes to dreamy vigilantes), I'm going to say that deep down he's still the same Oliver we've come to know and love.

I've said it before and I'll say it again — one of the key things this series prides itself on is its ability to fake us out with an impossible situation. Normally, you would think that there's just no redeeming someone who's unleashed a deadly virus upon their loved ones. But that's only because I doubt we've been given all of the necessary information. Underneath all of that brooding and deadpan stares, Oliver has a plan to save everyone. In fact, for all we know, Malcolm attempting to double cross Oliver wasn't actually a double cross at all, but rather just another part of Oliver's genius plan. (A double, double cross, if you will.)

What makes me so sure? For starters, there is absolutely no way that Oliver would ever hurt the people he loves with a bioweapon or anything else. Not to mention that the Arrow writers would also never kill off almost their entire cast of main characters, which means there's more to all of this than meets the eye. I'm betting that Oliver was somehow able to switch the Alpha Omega virus with something else, perhaps even some sort of sleeping draft. Because the symptoms of whatever this was doesn't properly correspond with that of the virus we saw plague the people of Hong Kong in Oliver's flashbacks.

For example, it took hours for the Hong Kong virus to take effect, whereas Team Arrow seemed to pass out within minutes of inhaling their mystery substance. Additionally, no one was bleeding from the nose like Akio (RIP) as a result from Oliver's concoction. They just pretty much closed their eyes and went to sleep. Conclusion: Oliver is still one of the good guys. Plus, it was kind of a big giveaway that everyone would come out of that scenario unscathed since they all appear to be very much alive and well (for now) in Wednesday night's finale promo.

But just in case all of that alone isn't enough to convince you, let's take a look at the episode title itself. "My Name Is Oliver Queen" speaks volumes in regards to where our Arrow's loyalty truly lies. He is not Al Sah-Him like he's pretending to be. He is now and forever will be Oliver Queen. So don't give up on him yet, folks. He'll come through and show his true (green) colors in the end. I'm sure of it.

More like this
This 'Gossip Girl' Wardrobe Error Has Gone Viral On TikTok
By Alyssa Lapid
Mollie Gallagher Has A Deeply Personal Reason For Taking Up Skating
By Maxine Harrison
A New 'And Just Like That' Table Read Pic Confirms A Key Character's Return
By Jack Irvin and Grace Wehniainen
The 'Gossip Girl' Reboot Creator Is “Looking For A New Home” To Air A Potential Season 3
By Brad Witter
Get Even More From Bustle — Sign Up For The Newsletter
From hair trends to relationship advice, our daily newsletter has everything you need to sound like a person who’s on TikTok, even if you aren’t.