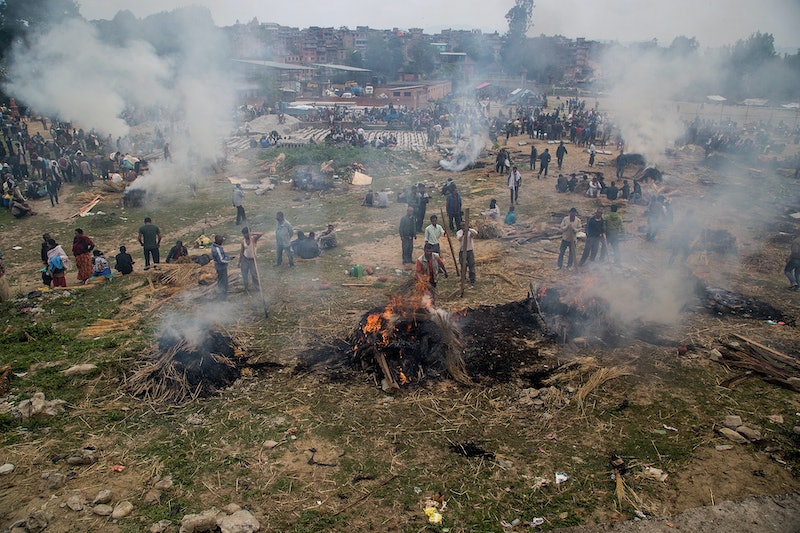 Relief efforts are underway as the international community pitches in to assist Nepal in the wake of the disastrous April 25 earthquake that killed more than 8,000 people. On Tuesday, the efforts may have been set back by a complication whose details remain unclear. As the investigation on the missing U.S. Marine helicopter aiding relief efforts in Nepal continues, here's what we know so far.

According to a military spokesperson, six U.S. Marines and two Nepalese soldiers were aboard the missing Huey. So far, NBC News reported that officials said there are no indications that the helicopter crashed, though the military could not confirm that as their search could be obscured by the darkness. Pentagon spokesman Colonel Steve Warren told NBC News that the military is hopeful that the missing chopper landed and is out of communication, because of the lack of smoke and other signs of a crash.

AP reported that Warren said a nearby Indian helicopter in the air at the time picked up on radio chatter about a possible fuel problem, adding that the Marine Huey was en route to from one location to another to drop off aid supplies when it lost contact.

According to a statement by Navy Captain Chris Sims, the helicopter, a UH-1Y Huey, disappeared at around 10 p.m. local time (noon ET) while supporting disaster relief efforts near Charikot, Nepal, in Operation Sahayogi Haat.

Warren said that other U.S. aircraft had been sent to search the area where the helicopter last was in contact, but since nightfall, Nepalese military members have been continuing the search on foot. The search will be moved to the Huey's second aid location to see if it had perhaps landed there, Warren said.

The tough mountainous terrain may have forced the helicopter to land in a low area, hindering chances to transmit a beacon or radio signal out, Warren told AP, adding that U.S. airborne para-rescue forces, who are rehearsed in rescue missions, are ready to be deployed if required.

The helicopter went missing the same day a second major earthquake with a 7.3 magnitude struck Nepal as residents struggle to shake off the shock and devastation from the devastating disaster mere weeks ago.

The Huey belonged to the Marine Light Attack Helicopter Squadron 469 from Camp Pendleton, California, though it is unclear where the Marines are based. The investigation is ongoing.