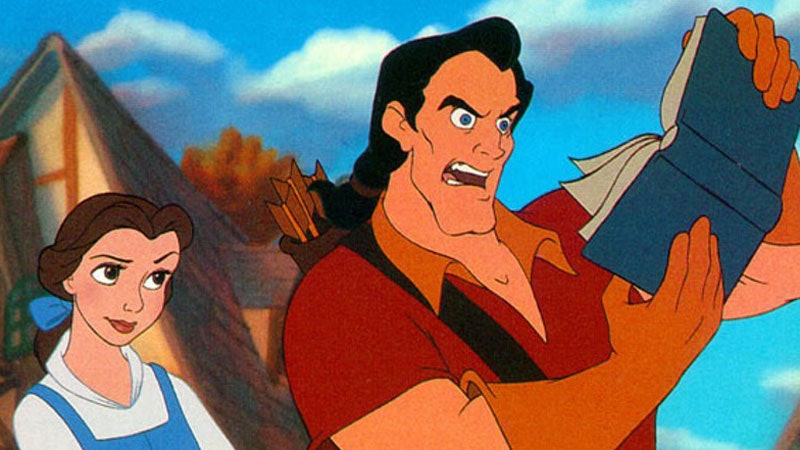 Never in my life did I ever think I would willingly keep myself in close proximity to someone who wasn’t completely head over heels in love with books. When you seriously love books to the pathological, more-likely-to-wake-up-next-to-a-copy-of-Sons-And-Lovers-than-a-real-life-boy degree that I do, there are just so many completely sane reasons NOT to date someone who doesn’t read books. So, imagine my surprise, when I found a drunken shenanigan of a hook-up with a software engineer turned into a four-year serious relationship. And we actually like each other. Mind. Blown.

Of course, there are some, pretty hilarious… complications when it comes to dating a non-reader. For example, this is an actual email conversation we had just a couple of days ago:

Me: Hey, got a new article up on Bustle about literary BFFs (don’t worry there are pictures).

Him: Awesome! Hey, I think I recognized more than 3 of the characters! Look at me!

Me: Well... I'm guessing two of them are the one that are also popular TV show or movie characters... right? So who was the third?

And then I had to take deep breaths and think happy thoughts about his pretty beard to remember how much I like this guy (seriously, I think his beard has superhuman mind-control properties). Turns out, there are some people out there who aren’t big book-lovers, but still somehow manage to completely win you over.

But don't just cut and run. If you find yourself freaking out as you realize you’re falling for someone who won’t even read the back of a video game box, at least make an informed decision before you drop ‘em. It isn't really as bad as you think. A lot of things just take a little getting used to. Luckily, you have me to give you an idea of what it’s like to date a non-reader, straight from the trenches..

In the early stages, you’ll be caught of guard, like way off guard. You’re so used to throwing around names and book titles with your book-loving friends, that you’ll probably go into a brief catatonic shock when your new boo doesn’t know your favorite (not even obscure!) author. Because, seriously... how? HOW does this person not know who Virginia Woolf is? It kind of feels like someone just walked up to you and asked if they can borrow your head for a minute. Just, what?

Yeah… every book-lover knows this pain, but no book lover’s lover is ready for that. It’s all lovey-dovey excitement after you decide to take the plunge, move-in, and get intimately familiar with the grosser versions of each other. But after three flights of stairs multiplied by 50 boxes of heavy tomes, he’ll either be calculating ways to determine when you want to move again so he can break up with you in time to save his poor biceps, or he’ll start negotiating with the landlord to work out a more “permanent” situation.

You Become Intimately Familiar With That One Book She Read Once, Because She Compares it To Every Single Literary Reference You Ever Make Ever

For my practically illiterate boo, it’s The Hobbit. It doesn’t matter if I’m talking about Victorian era marriage practices or the merits of towels in haphazard space exploration, his contribution to the conversation is most likely to start with “Oh! That’s like in The Hobbit when…”. Luckily, my inner book matchmaker managed to get him to read the entire Earthsea series (because dragons and wizards), so now we’re up to two books to reference.

It’s really terrible to admit, but your friends just aren’t gonna like this guy. Your friends read, he doesn’t. Sure your friends probably have something in common with him, like… breathing air, but when you get to together with your friends, you’re probably asking each other what you’re reading before you’ve even said a proper hello. So, when you go off on a squee fest about the latest in Deborah Harkness’ All Souls trilogy and he just sits there awkwardly confused, it’s just not gonna go well.

This one’s just adorable when it happens. When she invites new friends over and they go all bug-eyed that you even managed to fit all these books in your tiny one-bedroom, she just gives one of her “Oh, you’re so funny” laughs, very deliberately not mentioning that her books make up like 0.001 percent of the collection. Beware if she starts whispering too nearby the bookshelves; she’s probably trying to get away with lending out one of your books like it’s hers.

When She Finishes That Book You Made Her Read, Her Thoughts On It Are, "It was good"

It’s bound to happen. There’s no way she can be around a person with books so heavily on the brain for so long without finally wondering what all the fuss is about… or, at least, she’ll finally crack under the pressure of all that side-eye and the face palms you give her whenever she doesn’t know a seriously famous book. When you finally do start making some progress on her and manage to get her to pick up a novella, don’t expect a brilliant analysis of the motifs of time and death in The Sound and The Fury. She’s new to this whole reading thing; you’ll be lucky if she just remembers the main character’s name. So, regardless if it’s Macbeth or Fifty Shades of Grey, her full and complete thoughts on the book will be no more sophisticated than “I liked it!”

He WILL Attempt to Talk to You While You’re Reading

You know, all those guys that try to holler at you on the train while you’ve got your nose almost literally buried in a book, with your headphones on, and your best “just don’t” face screwed on… you are now dating that guy. Only he won’t be interrupting you to tell you how pretty your smile is. It’s much much more likely to be something about the awesome poop joke he heard at work today.

She might not read, but it doesn’t mean she doesn’t appreciate people who do. Actually, she probably thinks you’re kind of brilliant when you get "all literary" and start describing your theories about the relationship between Huck Finn and Jim… even if you never actually read Huckleberry Finn. Hey, how would she ever know? You could make every ending to every book of classic literature involve an alien abduction, and she’d never know. (No, seriously, do it. It’s hilarious).

It’s one of the common curses of the lit-struck. Reading is a quiet, solitary thing, and, sometimes, when you’re in the middle of the best book ever, you just kind of… forget to go outside, or talk to anyone, or get out of your pajamas. When you’re dating a non-reader, they’ll make sure you, at least occasionally, see the light of day. Actually, I'm so gone that my friends have gotten to the point where they actually text my boyfriend first if they want to get a hold of me.

So, see? There are some perks! You, too, can have a social secretary!