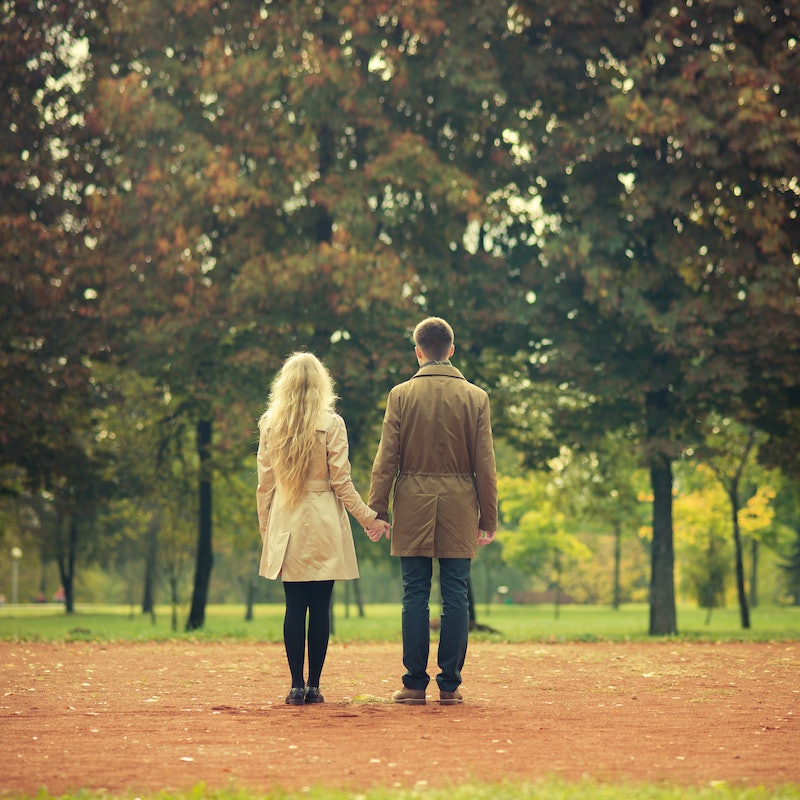 Nose pickers. Drug hustlers. Friends haters. Every character ever played by Adam Sandler. Oh heyyyy, Bustle reader, didn't see you there. I was just busy casually listing all of the humans I'd sooner date than someone who doesn't read books. As you can imagine, the list is so sizable that inanimate objects have made it because, although I have yet to test this theory, I'm pretty sure I would have a more fulfilling relationship with a doorknob than a person who doesn't own a bookshelf (note: I am indeed single).

As a person who was basically raised by books, I cannot help but balk, and I mean this in the least snobby way possible. I'm not sticking my nose up in the air at dating contenders because they haven't read Proust or written a 17-page paper on some other dead guy, because let's be real here: My entire shelf is jammed full of Shopaholic, YA Lit and a random assortment of science fiction that ranges from classless to slightly brain challenging. Books are not limited to fancy book snobs. I firmly believe that there is a book genre out there for everyone, and people who aren't reading books are deliberately ignoring them and their brains are suffering for it.

It's not like I'm going to take up my pitchfork and march in a parade to stop them from doing how they do (or don't do, in this case). But I can, with one hundred percent certainty, say that they are not dating material, and here's why:

There is no subtle way to suss out their true nature

Imagine this: You date someone for years, and then you marry them, procreate with them, even grow old with them. They don't read, but you compromise all through your years, until you're both 100 years old and you can't take it anymore.

"Please," you say, "my dying wish is that you read the Hunger Games series." And since you played the dying card, your significant other agrees—and as they flip to the last page, tears in their eyes, they whisper to you the last words you hear on this earth before you die: "I'm Team Gale."

THIS COULD HAPPEN TO YOU IF YOU ARE NOT CAREFUL. Your whole life could be based on a foundation that you didn't even know was a lie. How will you ever truly know what kind of a person someone is until you know their opinions about books? Answer: you won't. I'm not prepared to live a life on that kind of edge.

Your conversations will be significantly less pleasant

All couples argue, and if you don't, I'm sorry to break this to you but you are possibly stuck in the flop that was the direct-to-DVD animated sequel to Cinderella. Here's the thing about books, though: The arguments you have about them are actually fun, and a hell of a lot less personal than actual arguments. And once you get all that arguing out of your system, you really have no intellectual energy left to spare over who did the dishes last. Books are all the the most acceptable outlet for the inner rage lurking just underneath the surface, and if your S.O. isn't reading them, all of the actual sensitive topics in your life are fair game.

They will probably sneak watch Netflix WITHOUT YOU

I know this is quite an egregious accusation to make of non-readers, but we all need to walk into a situation like this with our eyes wide open. If you're a reader and they aren't, they're going to have all sorts of downtime to spend doing other things, and everyone knows downtime is a universally recognized synonym for Netflix. Before you know it, they're ten episodes ahead of you in Downton Abbey and you're spending the night in jail for hitting them with their own laptop after they spill the beans about a character death. This kind of chicanery doesn't happen in couples where both people read books!

They are less imaginative, especially for the *ahem* important things

Books require you to craft a vision of what the characters and their circumstances look like on your own. It takes up so much more brain initiative and creativity than staring at a television screen. I'm not implying that by wasting their imagination muscles, they'll be way less creative in other facets of life, including sex, but...oh, wait. I am implying that. Oops. Non-readers are not as good in bed as people who read. There. I said it. I'm not sorry, and I'm not wrong.

They'll never laugh at your jokes

They genuinely might just feel things differently than you do

It's not that non-book readers are like scary automatons without feelings. But when you read books, you go into stranger's heads way more often—not just the characters, but the authors who create them. It gives you an entirely different kind of empathy for people around you and might make you react differently to situations in your own life. People who don't read just aren't on that wavelength.

No, hear me out, I have a theory: I can count on one hand the number of times a guy who doesn't read has tried to date me, and it almost exactly lines up with the number of times I was completely certain that I saw a ghost and there wasn't one there. Coincidence? I THINK NOT. Don't get poltergeisted by these non-readers. We're all worth more than that.