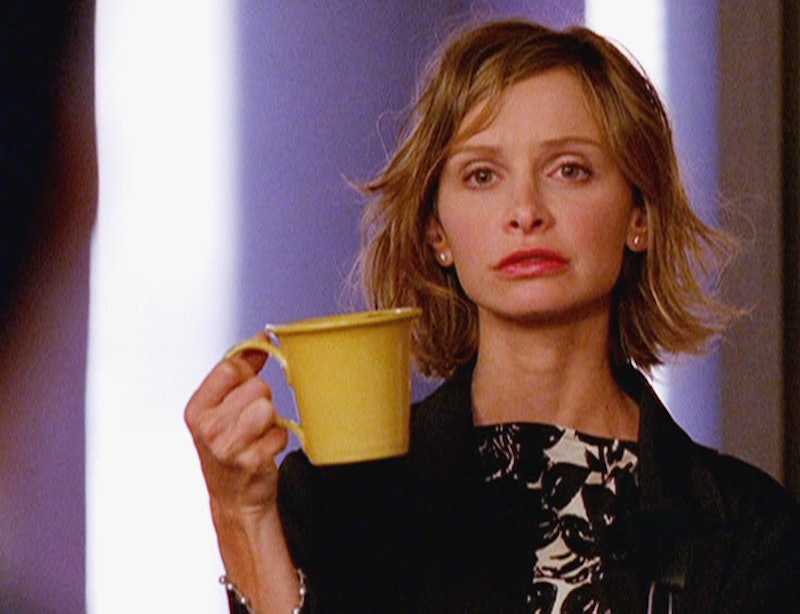 It seems hard to remember all the way back to 1997, but Ally McBeal was a pretty big deal when it premiered nearly 20 years ago. Another jewel in David E. Kelley’s crown (other gems include The Practice, which I still unabashedly love), Ally McBeal launched the careers of Calista Flockhart, Lucy Liu, Portia de Rossi, Jane Krakowski, and Josh Groban, as well as revived Robert Downey Jr.’s faltering one. But how well does the pilot hold up in 2016?

The show had fairly decent reviews when it first began, but some argued the show wasn't feminist. I fully disagree with this: Ally made the decision to stay at Harvard while Billy jetted off to school in Michigan. Isn’t choosing your own career and wellbeing over a man a step in the right direction? When she was sexually harassed in the first episode, she stood up for herself. Ally didn’t take it lying down: She brought up a lawsuit to her bosses.

That being said, Ally McBeal doesn’t really translate to today’s television landscape. Here’s what I noticed when I watched the pilot episode one more time.

1. The Clothes Are Incredibly Dated

Granted, you can’t do much for a woman’s suit to make it feel modern (just ask poor Hilary Clinton), but the men’s suits? Good lord. They are ill fitting and huge. They come up to the male characters nipples, and in relation to today’s menswear they feel as big as zoot suits. The shorts are also pretty short for a professional workplace, but it’s nothing I haven’t seen walking down the street. The lipstick is also super ‘90s.

2. The Vocabulary Is On Point

Richard uses the word “avuncular” (Merriam-Webster definition: of or relating to an uncle) in the first episode, so you know the vocab lessons are going to happen every week. David E. Kelley is second only to Aaron Sorkin when it comes to soaring speeches and 25-cent words, so you knew you’d have some big Scrabble winners in this set. Also, they’re lawyers, so they should know these words, right?

Ally’s voiceover at beginning talks about how she and Billy sniffed each other’s butts when they were kids because they saw dogs doing it and they thought it was normal. This was a years-prior prelude to their eventual first kiss. What is this? I know David E. Kelley has a warped sense of humor (more on that later), but this is too weird.

Ally leaves the firm she’s at because she’s being sexually harassed by a coworker, which is totally real and relevant and all that, but it just wouldn’t hold the same gravity in today’s world. Of course people still get sexually harassed, but it’s not as mind-boggling or confusing anymore. And the defense of the sexual harasser that he has an Obsessive Compulsive Disorder in which he has to squeeze butts would never get green-lit by any network at all. Not even Amazon or Netflix.

5. The Fantasy Sequences Are Really Weird

It is through the weird fantasy asides that Ally McBeal was way ahead of its peers. I can’t even think of another show that did that, can you? That being said, the computer graphics are totally awful, but that’s because I have an HDTV and no one is supposed to see Calista Flockhart’s breasts grow in such detail anyway.

Richard, Ally’s boss, had many a catchphrase, and “Bygones” was one of them. I think we should bring it back. It was kind of zeitgeisty at the time, and I think we’re due for a new trend. It could be the new “Bye, Felicia.”

I think we were supposed to root for him and Ally to get together (even though he was married to the perfectly nice and pretty Georgia, played by Courtney Thorne-Smith), but, nah. Forget that. Billy lied to his wife about his relationship with Ally. He didn’t tell Ally he was married at first, and then he revealed person details about his wife to Ally to make her feel better? Not cool, dude. All of the women are so much better off without this douche around. Also, his Caesar haircut is terrible.

Ally McBeal is a show I’ve lived without for a long time, but suddenly I’m tempted to watch the whole series again. Sometimes, a show is just a classic, and this is certainly one of those shows.