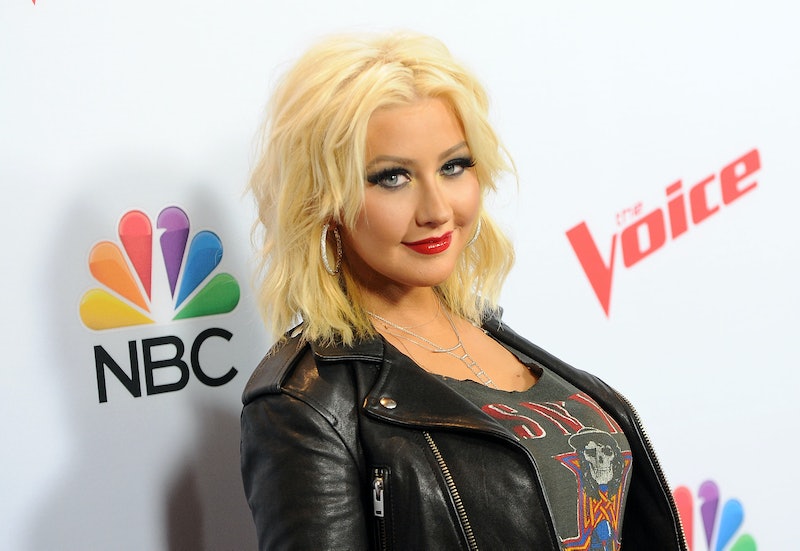 Just like her music and fashion, Christina Aguilera's best hairstyles have changed through the years. Just a few weeks ago, the Voice coach debuted her latest hairdo "the shab," which Aguilera and her stylist Giannandrea coined themselves. Throughout her career, the award-winning singer has transformed her look with a variety of dramatic hairstyles, whether its colored extensions, a chic retro bob, or edgy braids.

"With every record I put out, I make a drastic change," Aguilera told InStyle. "I like to try new things and not take myself too seriously." Early in her career Aguilera's hairstyles matched her bubblegum pop princess persona (along with fellow teen queen Britney Spears). But unlike her pop rival, the "Genie in a Bottle" singer was more of a rebel when it came to her hair. While Spears kept the same hairstyle for most of the early 2000s, Aguilera sported a cute "bed head" style in the "What A Girl Wants" music video and then added bright red streaks for the "Come On Over Baby (All I Want Is You)" video.

By 2001, Aguilera pushed even further away from her good girl image with crimped hair for "Lady Marmalade," often compared to rocker Dee Snider's wild mane. That look signaled the beginning of Aguilera's Stripped era, in which she wore braids for her "Dirrty" and "Beautiful" videos. Since then, the singer has changed her hairstyle several more times, each one complementing the vibe of the album (Back to Basics, Bionic), movie (Burlesque), or TV series (The Voice, Nashville) that she's involved in. Aguilera's current shoulder-length "shab" isn't exactly new territory for the singer, but it certainly has a modern, edgier twist to other bob hairstyles that she's done in the past. It's also more versatile and perfect for juggling her busy schedule as a mom and entertainer.

In honor of Christina Aguilera's ever-changing hairstyles, we've ranked her most memorable 'dos of all time.

It's definitely one of her most iconic looks, but Aguilera's "Lady Marmalade" style is too over the top and outdated.

We applaud the singer for often going to the dark side (of hair), but she's done brunette better than this.

It's cute, but a little too gimmicky for someone with such a daring style sense.

The blunt bangs had Little Monsters crying copycat, but Aguilera had the last word when she collaborated with Lady Gaga on the "Do What U Want" remix.

This look is a little too "safe" for her and is better suited for Jessica Simpson — circa 2003.

The hitmaker went for a futuristic and edgy pompadour while promoting her album Bionic.

She paid homage to Hollywood legend Marilyn Monroe with these big, blond curls.

Another iconic look from the House of Aguilera. This look (and the Stripped album) truly set her apart from other pop stars.

She returned to her dark roots — and looked fierce — while playing Jade St. John on ABC's Nashville.

The singer looks like a disco goddess in this feathered 'do.

Not one to shy away from hair dye, Aguilera's purple ombré is truly outrageous (in a good way).

The singer and Voice coach's latest hairstyle "the shab" is perfect for spring.

2. What A Girl Wants

Britney who? Before the big hair, the braids, and the neon dye jobs, she was a pop princess with a remarkable voice.

Aguilera rarely sports a short bob, but when she does, it's a knockout.