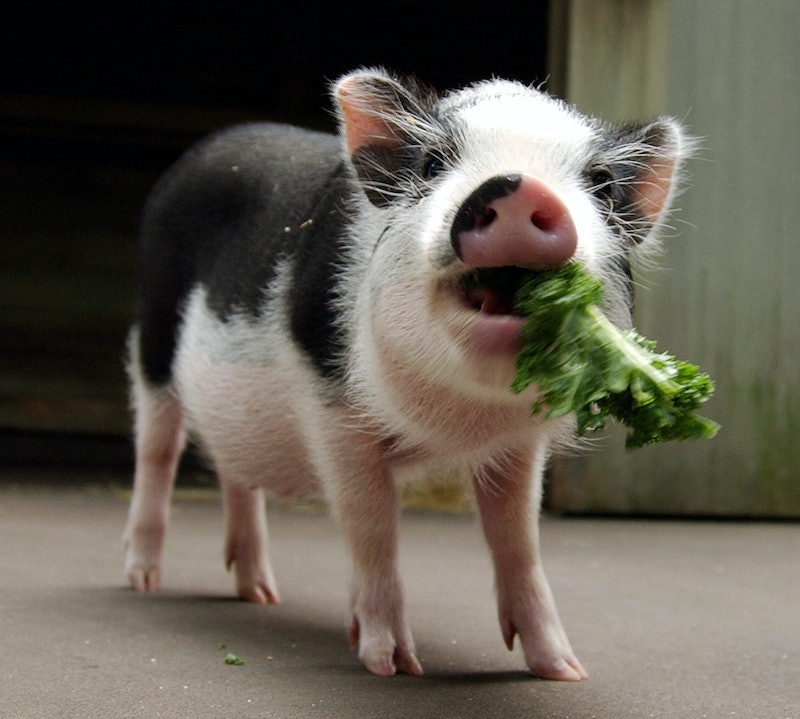 In fits of frustration, sometimes we say things we don't mean, and everyone is fully aware of that. Like when Miley Cyrus called an ex a "piece of s***", she probably didn't really mean it. Or when the rest of the options in a mayoral race aren't exactly promising so someone jokingly nominates a non-human candidate, it seems similar. However, it's a real thing that's actually happening in Flint, Michigan: Someone nominated their pet, so now Giggles the pig is running for mayor.

Giggles the pig faces some very weird competition: A convicted murderer and a convicted drunk driver. Well, life is all about choices, I guess. Anyway, this whole fiasco stemmed from a clerical error and miscommunication resulting in an entirely fill-in ballot in the Flint mayoral election. The miniature pig, nearly a year old, entered the race by way of his human, defense attorney Michael Ewing. Ewing announced the pig's campaign via the official Giggles the Pig for Flint Mayor on May 4, and already earned the pink politician close to 4,000 fans. That's pretty impressive.

Already, the pig has expressed humility and owned up to his mistakes. Following some pretty heavy language in regards to Wantwaz Davis, the convicted murderer, Giggles publicly apologized on his Facebook page.

"In politics, we should be able to disagree and be civil about it," the pig wrote. "And I wasn't too civil." Into this kind of honesty, for real. Also, he does look great in all those patriotic colors, right?

Giggles isn't the first non-human electoral candidate. Apparently there has been quite the impressive array of both animate and inanimate non-humans who have taken on political races. Let's scope a few particularly exciting ones now:

A cat candidate in Canada? Not only do I love that alliteration, I love this idea. A cat called Tuxedo Stan tried to run for office in Halifax three years ago. He didn't win the election (cats can't officially run, although dogs can, for whatever reason), but he did win my heart.

The dog who ran and actually won the race for mayor of Sunol, California, now has a statue in his late memory in the city.

Yes! A beer-drinking goat, because that's a chill idea (now embodied in Doug the Party Goat of Instagram, maybe). Anyway, Clay served as mayor for Lajitas, Texas, from 1986 until he died in 1992.

More like this
How To Fight For Reproductive Rights, Based On How Much Time You Have
By Courtney Young
How To Protect Your Digital Privacy If You Need An Abortion Post-Roe
By Kaitlyn Wylde
34 Quotes That'll Inspire You On Juneteenth & Beyond
By Syeda Khaula Saad and Siena Gagliano
Juneteenth Is Now A Federal Holiday — Here's What That Means
By Lani Seelinger and Syeda Khaula Saad
Get Even More From Bustle — Sign Up For The Newsletter