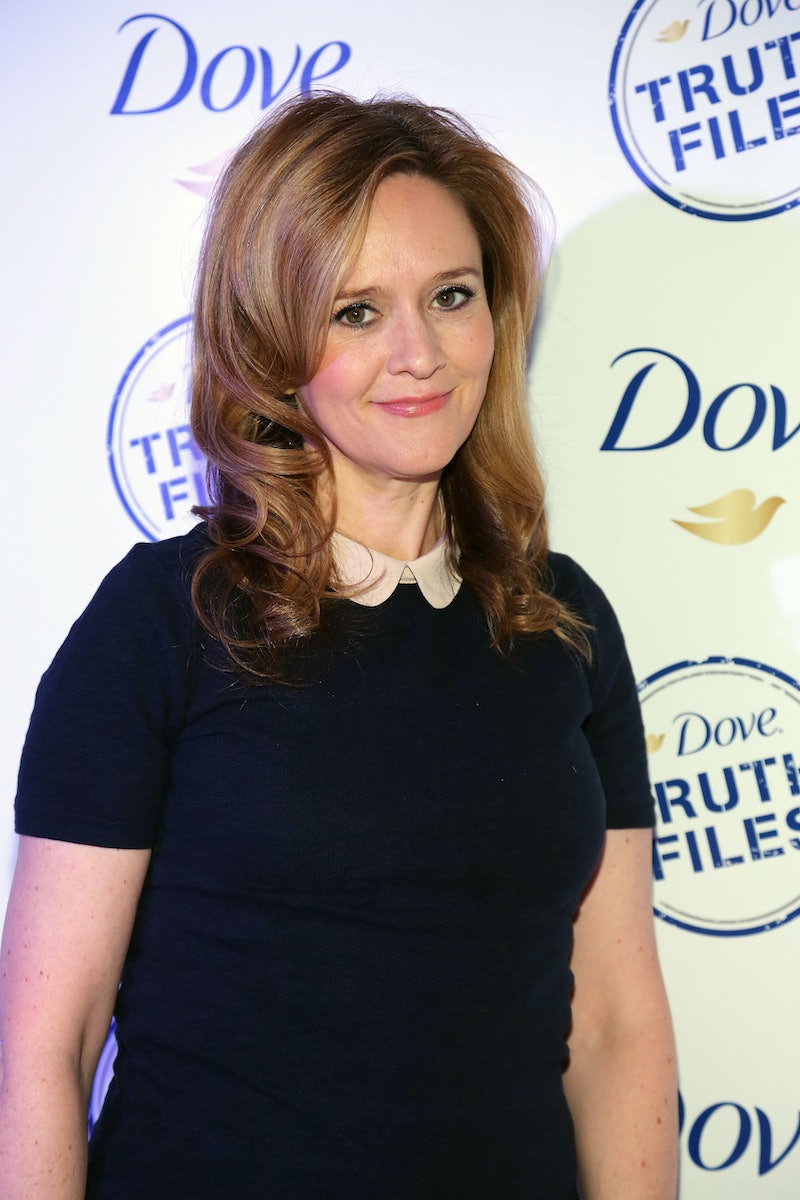 It's no secret that late night comedy has needed more starring women since the beginning: At the moment, it's a total boys club, and sadly it's been that way for a long, long time. Personally, I've been praying for this day (read: writing multiple think pieces about the inherent sexism of late night television) for a very long time, and it seems as if it's finally arrived: A female is finally coming to late night television, and she's absolutely going to be the one to slay the patriarchy once and for all. ICYMI, a sneak peek of Samantha Bee's new late night talk show for TBS dropped online Wednesday, and it looks brilliant .

What makes me so certain that Bee's series is the answer to my prayers? Well, first off, it'sSamantha Bee we're talking about here — she's great literally all the time. Secondly, though, the the teaser is an amazing watch: In the clip, Bee addresses the late night television gender gap head on when she views a gallery of late night television hosts, and ponders, "When I look at each piece individually, I like it. But when I step back, something is missing." Then, when offered a tray of sauages, she says the best sentence you'll hear all day: "I'm kind of done with sausages."

Bee was a longtime correspondent on The Daily Show , and she recently left to pursue a few projects with TBS; this talk show is one, and she's also set to produce a sitcom that stars her husband (and fellow former The Daily Show correspondent) Jason Jones, called The Detours . When you think about it, TBS seems just the right place for her to pull off this late night television revolution, too: The network took on Conan after he was dropped twice by NBC during the late night television wars of 2010, so they're clearly well-versed in the art of hosting amazing talk shows that other networks so foolishly turn away.

All eyes are going to be on Bee to change the tide for women in late night comedy, and, judging by this teaser, she's certainly up for it. She's not saying, "Hey, come on, just treat me like one of the guys!" Instead, she's stepping out on her own, and declaring that her show will be, "Female as f**k," which to me sounds like everything I want in late night comedy.

Since the details about Bee's show are vague at best at the moment, here's a quick wishlist of what I'd like to see on Bee's new talk show:

Bee had no qualms with getting real on The Daily Show, so her own series should not be the time for her to tone it down — quite the opposite, in fact. TEAR THE PATRIARCHY APART, GIRL.

Fantastic Comedians Who Also Happen To Be Women

In addition to featuring one of the funniest women on the planet front-and-center, Bee's show should also invite some other hilarious female guests and comedians to the show, and prove to the world once and for all that women are funny.

This sort of goes with the previous wish, but it's worth repeating: Bee's new show should not be a "sausage-fest," because there's already enough of that on TV. Judging by the promo for her series, it looks like she's already on the same page, which is literally hashtag BLESS emoji.

As a The Daily Show correspondent, Samantha Bee killed the news game — and she wasn't even an actual journalist. Even though she's left The Daily Show, however, she shouldn't let her talents at pointing out the absolute lunacy of some current events go to waste. More segments like the one above, please!

I wouldn't expect to see run-of-the-mill, cliché content from a comedian like Bee, especially after the work she did on The Daily Show. I have a feeling that Bee, like Conan, will march to the beat of her own late night drum.

Content That Completely Rules Over The Male-Dominated Comedy World