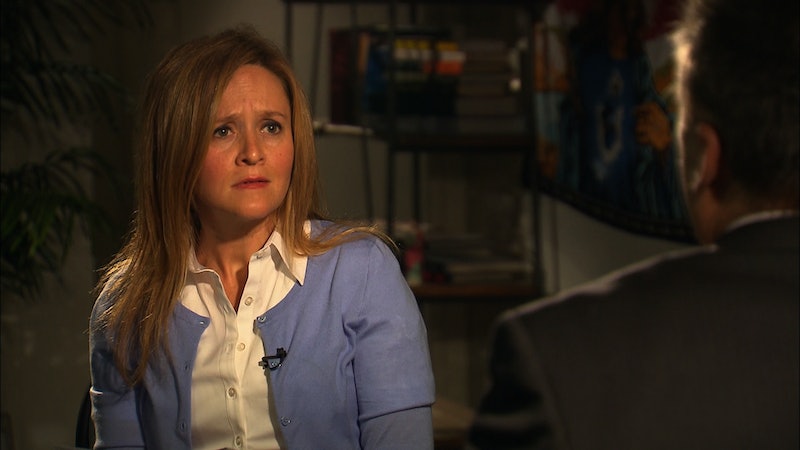 A necessary step in our emotional preparation for the ultimate retirement of Jon Stewart, or a cruel sprinkling of salt on an already stinging wound? I'm not sure which one better describes the departure of Samantha Bee from The Daily Show as one of the series' longtime correspondents, but I'm having a hard time with it either way. Last night, the contributor to the Comedy Central program bid her colleagues and viewers a fond farewell, instantly launching us all through a mental rabbit hole of memories regarding her finest work on the news satire series.

With 12 years of Daily Show work under her belt, Bee boasted the longest relationship with the series of any correspondent (topping runner-up Jason Jones — who is also Bee’s husband — by two years, and bronze medalist Stephen Colbert by four), establishing herself all the while as one of the program’s most reliable, if not always most vocally lauded, fixtures.

It’s true that Bee hasn’t quite received the same volume of fandom met by Colbert, John Oliver, or Ed Helms. Perhaps, just as each man’s ascension to a career outside of The Daily Show bolstered his comic reputation, Bee’s graduation to the center of her own TBS series — of which the details of are still largely under wraps — will likewise result in an a refreshed appreciation of her onscreen acumen. While the world might have yet to afford Bee the celebrity she deserves, all we really have to do to understand just how valuable a treasure she is to look back at her 10 years broadcasting beside Stewart.

Although the Daily Show operated and continues to operate under a unified comic voice and style, each of the program’s correspondents — each of its memorable correspondents, anyway — brought something unique to his or her persona. Before completing design on his Colbert Report character, Stephen Colbert relied on the juxtaposition of an advertised intellect with the buffoonery that’d ultimately fly from his mouth. Ed Helms’ innate abrasiveness cemented him as one of the show’s funniest interviewers.

But Bee has always had a special knack for navigating even the silliest of Daily Show candid interviews without risk of blowing her own cover. Compared to almost everyone else in the show’s history, Bee has been the best instituting a feigned camaraderie with her subjects, provoking in them a heightened willingness to spout ideological tirades that will stir amused reactions in any viewer at home. Bee leveled herself with her guests, instituting a false sense of repute in the mania that they’d so often spout.

One particularly memorable piece saw Bee extracting some of the most ridiculous bravado ever set to the American small screen from a trio of Long Island alpha-males, misleading them to believe she was enrapt by their charms. The result was a barrage of prideful boasts directed toward a coy Bee, whose hidden disgust with the gentlemen in question was reserved only for the knowing audience…making the whole ordeal all the more hilarious.

Bee’s delicate puppetry of her Daily Show pieces represents a comic expertise perhaps even more impressive than those of some of her more decorated colleagues. We might love Colbert, Helms, and Oliver, but could we praise any of them for the same skilled machination of what often amounted to psycho-sociological goldmines?

While every correspondent offered something of value to The Daily Show, one might argue that Bee best exemplified what the show was all about in the first place. When Colbert, Helms, and the like were onscreen, they were the characters. Thanks to Bee’s expertise in the trenches, she allowed her subjects — the follied folks of the world at large — to be the characters. Every correspondent on the show can be applauded for his or her comic prowess, but Bee stands tall as perhaps the greatest purveyor of satire that the show ever had in its lineup.