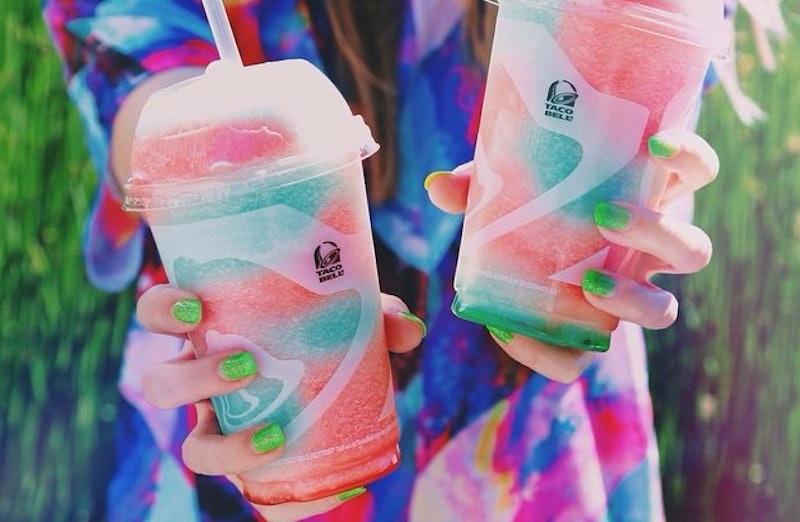 In the most epic fast-food news as of late, NBC Chicago said the management of a new Taco Bell in Wicker Park, a neighborhood in Chicago's West Side district, just applied for its liquor license. You read that right. The Wicker Park Taco Bell could serve alcohol. The new Taco Bell would be the first in the 6,500-store chain to do so, and it would certainly set the bar for the rest of the locations across the U.S.

Just imagine it: You're happily munching on your Doritos Locos Tacos AND you slug back a beer or sip a specialty Taco Bell margarita. Maybe the chain will be able to start calling itself something like Taco Swell! Or Taco Heaven, but that just doesn't have the same rhyming effect. Where else can you get a biscuit taco AND tacos made from Doritos and "fire" tortillas? Now adding alcohol to its repertoire as well? Whoa, Taco Bell.

This new Taco Bell is going to take on the challenge of being upscale and still perfect for drunk people. A Yum! Brands spokeswoman told Chicago Eater the Wicker Park location, located at 1439 N. Milwaukee Ave., will also have a "completely new urban restaurant design." There were rumors that Wicker Park would be the location for Taco Bell's second U.S. Taco Co., a version of the upscale concept in California that features lobster tacos and other premium items that the other, still arguably fabulous, Taco Bell's don't have. That rumor was shot down, and plans to offer boozy milkshakes at the California U.S. Taco Co. were postponed, according to Eater. So, now, the Wicker Park Taco Bell is our only hope.

It would almost be too perfect, because Taco Bell is the best drunk food known to anyone. Don't tell me you haven't tried — at least while you were a college student — mixing a Mountain Dew Baja Blast Freeze with a smidgen of rum (OK, maybe not a smidgen) and found that it was a stellar summer concoction.

Maybe they'll make Bloody Marys with their own hot sauce!

Or maybe they'll throw some Bailey's Irish Cream in their Cinnabon Delights Coffee! (OK, I know I joke, but that sounds seriously delicious.)

The possibilities are truly endless, and we cannot wait to see what kinds of drinks, or situations, generally, happen if the Wicker Park Taco Bell makes fast-food history. And then hopefully they'll expand the brilliant measure across the country.