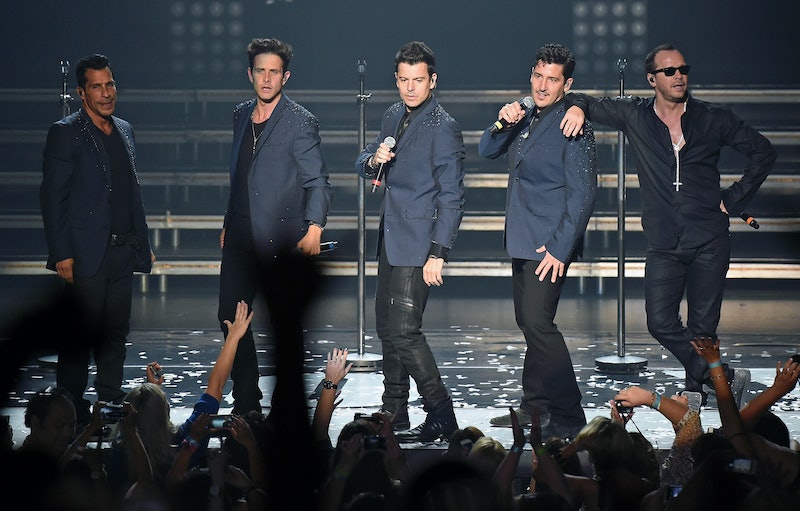 GUYS — the '80s girl in me is fangirling SO hard right now! (Okay, so I wasn't alive in the '80s, but that doesn't mean I can't appreciate the amazing music from the decade.) As if Ricky Martin and Fall Out Boy weren't enough, New Kids on the Block performed on the American Idol Season 14 finale — and it was everything we could have ever wanted. Sure, I feel like I've been transported to the late '80s — the only thing that's keeping me in the present is the fact that there's no NKOTB poster on the wall — but that performance was truly off the chain. And if NKOTB didn't appeal to the ladies enough, Idol cutie Daniel Seavey, 15, joined in for the epic performance.

The ultimate boy band kicked off the segment by giving Seavey a little dance lesson. After band practice, they took their show to the stage. Seavey admittedly stole the show. He joined the band in classics like "Step by Step" and totally sang the guys under the table. Okay, maybe not — but he definitely sang louder than them and they totally didn't appreciate him as much as they should have. Instead of including him in the performance, he kind of hung out on his own and chimed in only when he was supposed to. I mean, they are like three times his age... Seavey wasn't even born for at least 10 years after they were popular. He gave a valiant effort though, and it was an amazing performance nonetheless.

The only thing I'm confused about, though, is where are Clark Beckham and Nick Fradiani in all of this? They got to perform with Fall Out Boy in the beginning and were gifted with Ford Focuses a little while ago, but there hasn't been as much spotlight on them as I would've thought. All of the Top 12 rejects have been the ones with the special performances. I'm sure their big performances are still to come, but they should've gotten a little more special treatment. At least the guys of NKOTB got one last chance to shine.