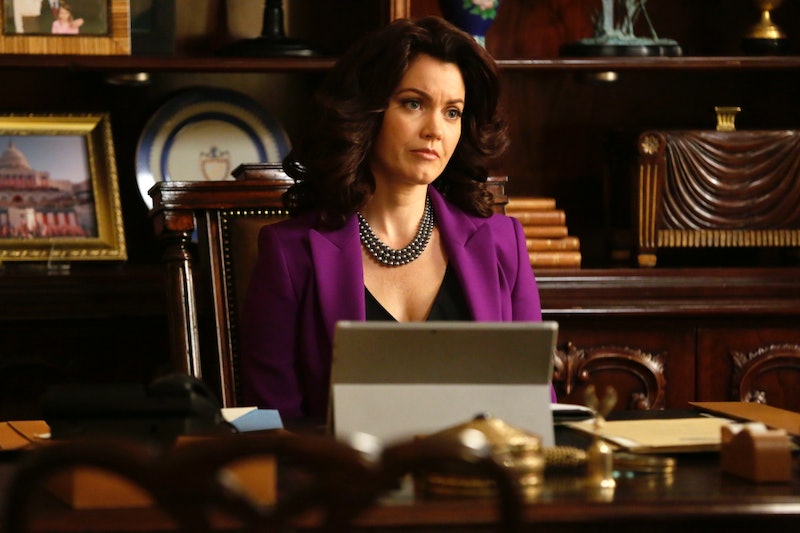 The world gasped together when it was revealed that Mellie is "Foxtail" on Scandal . Mellie was the last person I expected to be wrapped up with Rowan Pope, which I guess makes her the most likely candidate. That's just how Shonda Rhimes works, right? We don't know much, but what we do know is that Mellie's secret service name is Foxtail, and it seems like Rowan has repurposed it into a mission that is sure to make an explosive finale. One theory I have is that Foxtail is a plan to make Mellie the President of the United States, with the help of Rowan Pope.

I don't think Mellie Grant knows that she is apart of Operation Foxtail. If she does, well color me surprised, because I would be shocked if she pulled a fast one on all of us. My guess is that Foxtail is Rowan Pope's manipulation to get Mellie in the Oval Office. I don't think he has any interest in Mellie actually being President, other than the fact that it will give him a direct line to an insane amount of power.

If Papa Pope's Operation Foxtail is getting Mellie as President, there are surely going to be some casualties that go along with that. First of all, Rowan Pope hates Fitz. If Mellie wants to be President, and Fitz is standing in the way, and Rowan Pope is helping Mellie get the Presidency, there's no telling what Rowan will manipulate Mellie to do to make the Fitz problem disappear. But Mellie isn't easily manipulated. She can spot a bad seed, and even though she wants to be President more than anything, she wouldn't become corrupt at the hand of Rowan Pope, would she?

In a clip of the episode, Rowan hands Mellie a file, selling himself as someone who would be happy to back her Senate campaign as long as they have the same political interests. But when he hands her a file filled with his "interests" (which are, what? Eliminating her husband?) Mellie's face drops instantly upon opening up the folder, and through a plastered smile, she tells Rowan that she has the same important interests as him. In like, the least convincing way ever.

Is this the start of Rowan and Mellie working together? If he promises her political success in exchange for her doing his dirty work? How far is Rowan willing to go to get what he wants (Fitz gone)? I think he could potentially have bigger plans than just eliminating Fitz from his life and his daughter's life. If he helps Mellie win the Senate election, he will slowly be gaining more and more power — aside from his already incredibly powerful Command position — that could turn into a battle of bloodshed. I can't imagine what he could do if he has control over President Mellie.