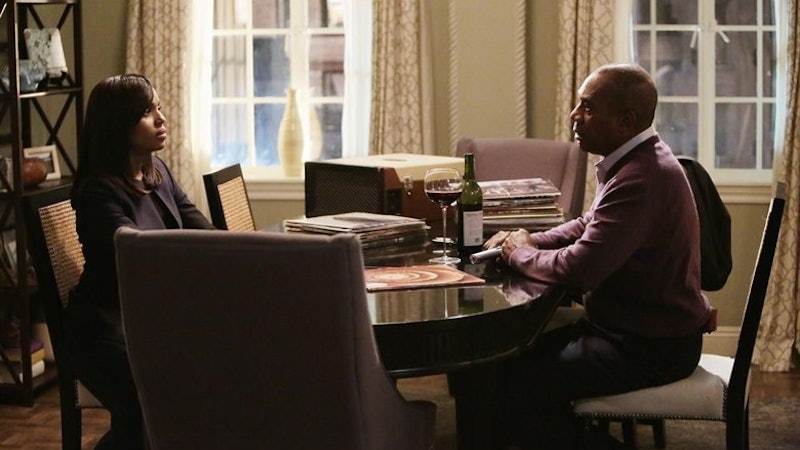 Scandal is full of formidable characters, but perhaps none is more capable and coniving than Eli Pope, also known as Rowan, also known as Command, also known as "I will kill everyone you love without even needing to stop my epic monologue." But will Eli Pope finally fall in next week's Scandal season finale? Only time will tell, but one thing is for sure: Scandal is gearing up for one epic showdown.

This week on Scandal we saw Huck, Quinn, and Jake trying to get information out of one of Eli's agents about his mysterious operation called "Foxtail." But by the end of the episode, Eli had not only managed to get his agent back, but showed up posing as a potential donor for Mellie's senate campaign — because it turns out Operation Foxtail is Mellie! That's Eli Pope for you. Always ahead of everyone, even the audience.

It's unclear what Eli's goals for Mellie might be, but I think we can count on them being something along the lines of "not good." (Though if Mellie finds out he's the one who ordered her son be killed while Eli is still in her presence, I'm putting the odds of who walks away at 50/50.)

Meanwhile, though, it seems clear that the time has come for a showdown between Eli Pope (and whatever bits of B6-13 he has left to work with) and Olivia's assembled allies. The show has been setting up such a showdown for a long time, and this episode made clear that as long as Olivia and Eli are both around, he will never let her go completely. As Jake perfectly breaks down for his shirtless replacement, Eli will go away for a while until Olivia thinks she's safe, and then once she lets her guard down, he comes back into her life somehow. Because he wants her to know she will never be free of him. And that is never going to change.

Unless, of course, he's dead. (Though he is such a delicious character, I sort of hope that if they do want to get rid of him, they capture him instead and leave the possibility of future appearances open.)

So will Eli Pope fall? Or will he collapse Olivia's world instead? One thing is sure, next week's season finale looks like it's going to be a nail biter.