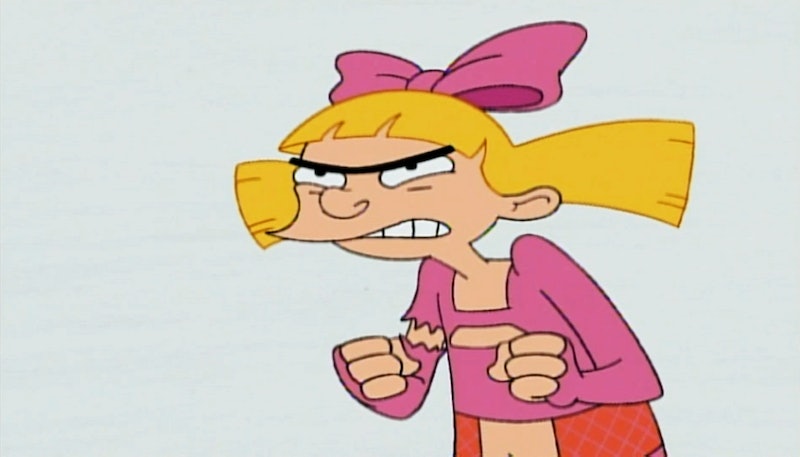 As every born and bred '90s kid can attest, the pop culture we consumed during our youth had a huge impact on the people we are as adults. Whether it was the YA books we adored or the bands we obsessed over, practically every piece of entertainment we devoured in those early years gave us something. Maybe it was as small as what to wear to a dance or how to get through middle school, or perhaps it was as big as how to deal with heartbreak or overcome loss. For me, one of the biggest influences pop culture had on my life was teaching me what feminism looked like, at a very early age. Yes, I had a working mother and a community of women in my life, but I was a kid — the entertainment I consumed gave me more insight on the matter than anything else.

TV, in particular, provided me with examples of feminism that've stuck with me for the entirety of my life. There may not have been a surplus of female-led cartoons back in the late '90s, but there were a handful of characters on shows ranging from Hey Arnold to As Told By Ginger that embodied feminist beliefs and female solidarity. Here are the eight most feminist animated TV characters from the kids' shows of my youth, ranked:

Sandy was the Hermione of Spongebob. She never got the credit and was often ridiculed by her "friends," but she was extremely smart and endlessly driven, often forced to save the boys from their own stupidity. Seriously — what would they have done without her?

Yes, Helga's defining trait was her (potentially stalkerish) love for Arnold, but she was also a brilliant and bold girl with real goals for her career. Even when she was dreaming of a future with Arnold, she always pictured herself in a position of power, demanding equality and making sure the world knew who was boss.

How many six-year-olds openly acknowledge that it's okay to be into stereotypically "girly" things like clothing and princesses while also loving "boy" activities like sports and competition? Even in 1999, Emmy was a pioneering TV feminist, and a fantastic example for the show's youngest female viewers.

Angelica's mom, FTW. Sure, she wasn't the nicest character, but she worked hard, provided for her family, and provided a great example for her daughter of what being a feminist was really about.

All three of the Powerpuff Girls were feminist characters, of course. But of the main trio, Blossom was the best example of what that term meant: she was a smart, independent, strong-willed leader who liked pretty clothes just as much as kicking butt. She spoke her mind, stood up for her beliefs, and protected her fellow ladies. Not bad for a 5-year-old.

3. Lois Foutley — As Told By Ginger

Look, Ginger was a great character, a spirited and smart teenage girl. But it was her mother, Lois, who embodied all things feminist. She raised Ginger and her brother alone, supported them as a nurse, and encouraged her daughter to display real strength and independence despite the pressure of her friends.

The Wild Thornberrys was one of the most feminist kids' shows ever, thanks to its depiction of a pre-teen girl exploring her interests and rejecting gender norms. Eliza hated being told what to wear and what to do, and thankfully, her family allowed her to be herself: a smart, spunky, and fearless kid.

Reggie was the ultimate kids' show feminist, and as the only lead female character in the show, she provided an amazing example for girls. A brave, intelligent, open-minded teen, she balanced her love of sports with her passion for writing, proving that women (or at least 12-year-old girls) really can have it all.

More like this
The 'Hocus Pocus' Sequel Finally Has A Release Date & It Makes Total Sense
By Shannon Barbour and Radhika Menon
Why You Loved 'One Tree Hill' So Much — And Still Do
By Sabienna Bowman and Radhika Menon
Emma Thompson, Lashana Lynch, & Stephen Graham Lead Netflix’s 'Matilda'
By Sophie McEvoy
Everything To Know About 'My Big Fat Greek Wedding 3'
By Grace Wehniainen
Get Even More From Bustle — Sign Up For The Newsletter