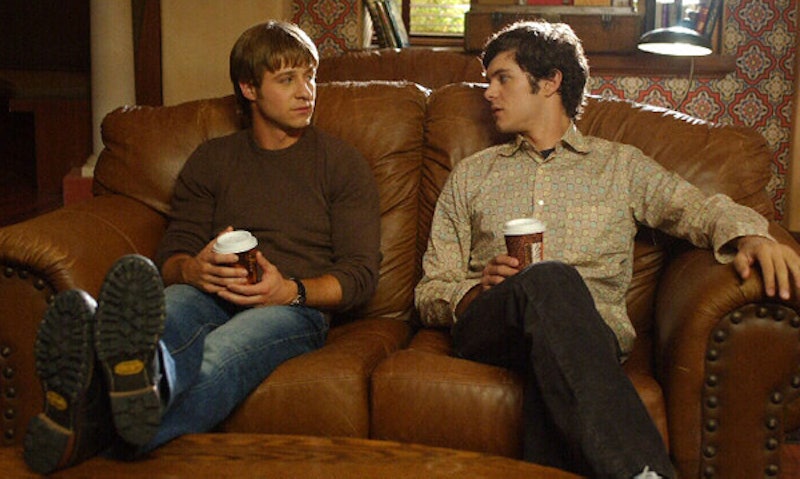 It's a mystery that has baffled generations... or a singular generation. As many of us know, Ryan Atwood and Seth Cohen were two very different teen heartthrobs who co-existed on one very specific mid-2000s teen soap called The O.C. Both of them were crucial to this show, and both of them never quite clamored for the spotlight. But after all is said, done, and over, one thing is still very uncertain... who actually WAS the main character of The O.C. ?

In the past, creator Josh Schwartz has stated that one of the driving forces in the series was the dynamic between the "two brothers," and that's adorable. It's like what someone's parent says when asked which child is their favorite. But, in the end, it's undeniable: eventually, one of those kids is going to come out on top. So, after many years of beating around the bush, it's finally time to determine who, definitively, is the The O.C.'s lead protagonist. But how?

Well, we're gonna have to ask the hard questions, and we're going to have to answer them honestly. It may be difficult to choose between Ryan and Seth, but at the end of this study, I think we'll all be less confused, and far better people.

Whose Family Had The Most Substantial, Positive Influence On The Show?

Ryan's felon brother Trey allowed him to get arrested in a grand theft auto scheme, tried to kill him, and attempted to rape his girlfriend. Ryan's mother was so terrible at raising her children that she just forfeits Ryan to the Cohens. And Ryan's father, who was out of the picture for so many years, mostly just shows up to get Julie Cooper pregnant.

Meanwhile, Seth's father is easily the pillar of morality in Newport Beach, and also a man with astonishing, amazing eyebrows. Kirsten never failed to support and love her children. Basically, at the end of the day, the Cohens are just an adorable family who loves bagels and Thai food.

Cohens win over Atwoods, every time.

Who Had More Of A Backbone?

Please. Seth can stand on as many coffee carts as he wants, but his spine was still pretty pliable. Like, his most rebellious move was sailing away to Santa Barbara. Come on, guys. Ryan, however, would legitimately punch a man if he had to fight over who got to be the main character.

Ryan would punch a man for some chicken nuggets.

Who Is Most Likely To Make Me LOL?

You know what? If you pay attention, you'll see Ryan had some good jokes, especially as the seasons wore on and he lightened up a bit. Remember his little thing on the Summer flu? And viewers were all like, "oooh, Ryan's funny now."

But if Ryan got funny, it's only because Seth rubbed off on him. Seth is the ultimate master of self-deprecating sarcasm, and fans love him for it.

Who Would I Rather Binge Watch The O.C. With?

I mean, it's a weird thought — marathoning The O.C. with a character from The O.C. But, it's an important question to ask, because whether or not you can binge watch a television show with a person is important to understanding their character. Personally, I think Seth would be completely consumed by the show — he'd probably find himself endearing, or something, and he'd be way into the soundtracks.

Ryan would probably fall asleep a few hours in.

Who Had The Better Music Taste?

Seth was interested in a variety of indie rock bands that pretty much defined your teen years between 2003 and 2007, and it's probably because of him that you were introduced to the brilliance that is Death Cab For Cutie.

Ryan, on the other hand, listened to, like, one song by Journey.

Point: Seth — but no disrespect to "Don't Stop Believin'" by Journey.

Which One Had The Most Pivotal Romance?

I mean, Ryan and Marissa had drama with an afterlife, that is, it extended past Marissa's death. Because... she died. Seth and Summer, though, was the cute couple that you had fluffy feels about. Both were deeply essential in their own way way.

Point: Seth. Drama and forbidden love is great, but Seth and Summer had toy horses who were also OTP, and there's no beating that.

Who Had The Juiciest Plot Lines?

As previously mentioned, Ryan's life was drenched in drama. It was always like, cage-fighting, car crashes, and fending off your girlfriend's stalker-of-the-month. Or maybe being a baby daddy and having to move back to Chino. In other words, it was drama, drama, drama, all the time.

So, comparatively, Seth's story lines were pretty tame. Sure, they included not getting into college and breaking up with the love of his life... but still, that's not on par with anything Ryan went through.

It's a close call, but I'm actually gonna give this one to Ryan — but with a disclaimer. The reason Ryan wins out over Seth (despite the fact that Seth got more points in our study here) is because we're essentially following his story — which is how the rich town of Newport Beach is changed by the arrival of this kid from "the wrong side of the tracks." After all, the series ends with him extending a helping hand to another troubled kid, assuring HIS story came full circle.

However, that's not to say Seth Cohen wasn't the breakout character of the series, because he was. Seth brought something so special and unique to television that he'll still win out as the fan favorite, time and time again. Both Seth and Ryan were important to the show in their own ways — and there's really no way The O.C. would have worked without either of them.

More like this
“The Door Is Always Open” For Another 'Breaking Bad' Spin-Off, Says AMC Boss
By El Hunt
Who Is Liam Neeson's Character In The Obi-Wan Kenobi Finale?
By Kadin Burnett
Viktor Hargreeves’ Coming Out Scenes Are The Sweetest Part Of Umbrella Academy Season 3
By Gretchen Smail
The 'Hocus Pocus' Sequel Finally Has A Release Date & It Makes Total Sense
By Shannon Barbour and Radhika Menon
Get Even More From Bustle — Sign Up For The Newsletter