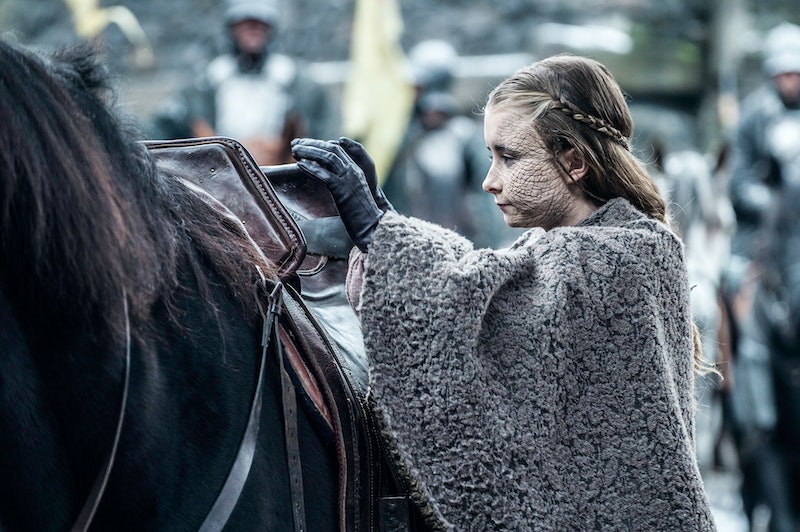 Well, Jorah Mormont has seen better days, huh? Not only did Daenerys cast him away a mere season ago, but now he's been dealt another blow — Ser Jorah has greyscale. This is not good news for anyone. I mean, I wouldn't wish it on of my enemies. I wouldn't even wish greyscale on Joffrey (if he were still alive, that is.) There is no known cure for greyscale, or at least one that works across the board on everyone who's contracted the disease. No cure makes this whole ordeal even worse. While you can certainly wish and hope that it goes away, it usually leaves those affected by the disease dead.

So what is greyscale exactly? To try and make a real-world connection, smallpox (or even chickenpox) would have to be the closest example. It affects both children and adults, though for children it's a lot milder and can usually be treated. For adults, though, once they contract it, they're basically done for. Same thing with both of the poxes mentioned. Smallpox is worse for children, but can be treated; chicken pox is worse for adults, but still treatable. The thing about it is, though, if you become infected with greyscale, you kinda become an outcast, almost like those who contract leprosy.

The books established three different kinds of greyscale: one for children, one for adults, and The Grey Plague. For children (like we've seen with Shireen) it can in fact be treated and the spread of it though the body can be stopped. However, as soon as an area turns to Greyscale it cannot be reversed — like Shireen's cheek.

The adult version is much worse. Catch it and it's basically, "bye!" Supposedly the spread can be stopped, but only if you cut off the limb. And even then, there's no guarantee. You'll probably end up a Stoneman, and that is super painful and super awful.

Lastly, there's The Grey Plague, which is exactly what it sounds like. One person infects a ton of people, and everyone turns to stone, and everyone dies very quickly. But the original carrier doesn't necessarily die, so it's just a huge spread of greyscale across Westeros and it's bad news dragons.

In a Dance with Dragons, greyscale is clearly laid out:

[Tyrion] had heard it said that there were three good cures for greyscale: axe and sword and cleaver. Hacking off afflicted parts did sometimes stop the spread of the disease, Tyrion knew, but not always. Many a man had sacrificed one arm or foot, only to find the other going grey. Once that happened, hope was gone. Blindness was common when the stone reached the face. In the final stages the curse turned inward, to muscles, bones, and inner organs. — Chapter 18

Not reassuring. Certainly there's something to be done so save Ser Jorah, right? While I don't have my medical license by any means, and I can barely remember to take my allergy pills most days, here are just a few home remedies that Ser Jorah could try to cure himself from greyscale.

Basically, you can try all you might, and come close to a cure, and think you might have cured it, but there's still not guarantee. Shireen got lucky. She got very lucky because her father was wealthy and could afford to give her the best care, but even those healers were grasping at straws for a cure.

Ser Jorah, on the other hand, cannot afford the best care, unless he's going to use Tyrion as payment. Game of Thrones is majorly switching up a lot of stories this season, and Ser Jorah is the latest to fall for this. In the books, he's still very much alive and plays a big part in the story (including, later stories for Dany). Is there a chance he'll somehow miraculously find a cure? A girl can only hope.