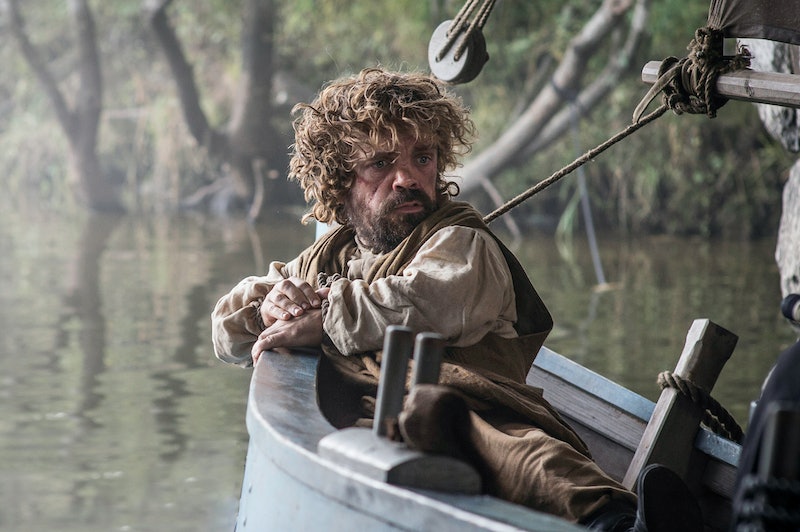 That was certainly one way to make our hair turn white as a collective audience, Game of Thrones. In the final moments of "Kill The Boy" Jorah and Tyrion are attacked by Stone Men, and if that name sounds familiar it's because we just learned about them thanks to none other than Stannis Baratheon and his sweet little daughter, who once survived Greyscale — a disease not unlike leprosy, if leprosy turned you into a statue person. But in the final moments of the episode, after it seemed that Tyrion would be the one meeting a gruesome end (nice fakeout, by the way — a perfectly timed blackout that lasted just barely too long), we saw that Jorah contracted greyscale and no, this didn't happen in the books.

This means that yet another storyline is getting shifted in a season that has been playing fast and loose with George R.R. Martin's novels. The way the Jorah and Tyrion storyline goes in the books isn't unlike a buddy road trip comedy, minus the comedy. Jorah and Tyrion meet a few friends (another dwarf named Penny) before getting sold into slavery and eventually making their way to a sellsword company where they're paid to fight against Daenerys (kinda the opposite of the whole reason for this quest, oh boy). But questing all the way across Westeros and beyond takes skin that hasn't turned to stone. Sure, those Stone Men seemed to move just fine, but I'm guessing sellsword companies aren't in the market for terminal illness-ridden soldiers who could infect the whole company.

Now, it's possible that Jorah will survive this — after all, Stannis' daughter did — but possible doesn't mean probable. Stannis had the best healer he could find come in to take care of his daughter, which is perfectly reasonable given his station. Jorah can't exactly afford that kind of thing, nor can he safely stay in one place long enough to get healed. It would take nothing short of a miracle to save him. And that could mean that this supposedly deadly season is gunning for Dany's former right-hand man.