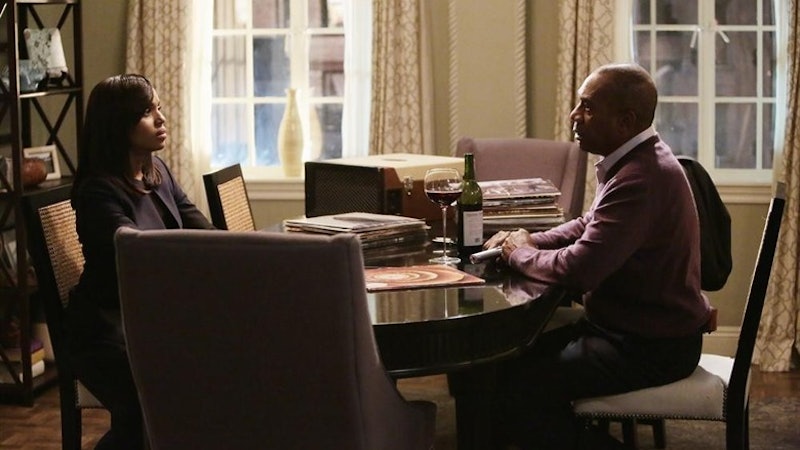 Olivia and Eli Pope have been at each other's throats for quite some time, but on this week's on Scandal season 4 finale Olivia Pope's showdown with her father was the most unexpected yet. But before the bullets started and the double crosses began tonight, Olivia told Jake — and, by extension, us — exactly how she feels about her father. And as far as breaking points goes, this one was long overdue. If Rowan was my father, I would have gone on a rant about it long before now.

In telling Jake that she wanted him to testify in front of the grand jury, Olivia explained that this is something that she wants for herself. As Jake broke down last week, Eli, aka Rowan, aka Command, is never going to let Olivia just live her life. He's always going to try to control or manipulate her. After all, at this point he's sent not just one but two agents in to seduce and spy on her. Which is just creepy. And Olivia is tired of it.

"I am not his victim, I am not his child," Olivia tells Jake. "I want this for myself." She explains she wants to turn the tables until, "for once in his life he is the scared child, and I am Command!"

And even though she recognizes the importance of taking down her father and stopping him once and for all, she wants this for personal reasons. "I don't want to gladiate for everyone else!" she shouts. "I want this for me!"

And that was a huge moment. Olivia Pope spends so much of her life taking care of other people, fixing everyone else's mess, handling everyone else's problems. Sometimes fixing is a way for her to distract herself from her own problems, sometimes it's just a job, but she is always good at it. But for once it is great to hear her say, so clearly, that she wants something for herself, and for her to let herself admit that.