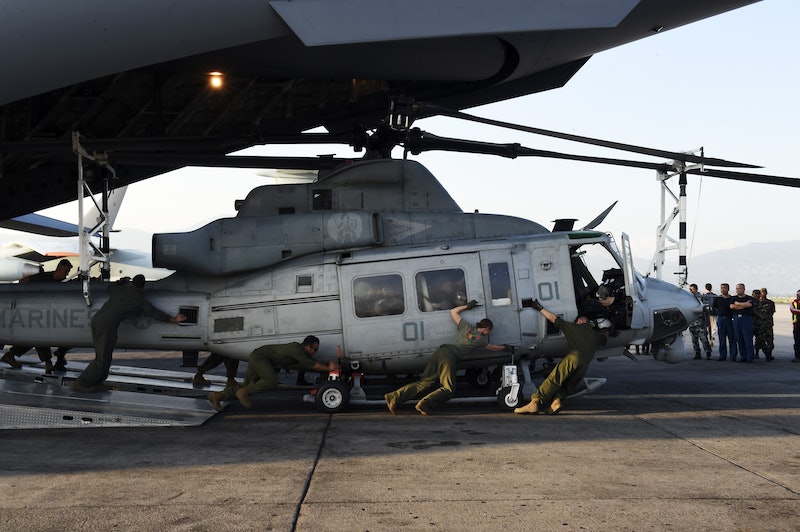 The remains of a U.S. Marine Corps helicopter reported missing in Nepal Tuesday have been found. The helicopter was completely destroyed after a crash in mountainous terrain, and none of the eight passengers survived, Nepal’s top defense official said in a statement Friday. The UH-1 Huey helicopter was delivering earthquake relief in the Charikot region of central Nepal when it was declared missing, sparking days of searching in the quake-ravaged country. Six U.S. marines and two Nepalese soldiers were aboard the aircraft.

“A small helicopter has landed in the area and is doing investigations now and has spotted six bodies,” Nepalese army official, Major Janak Silwal, is reported by The Guardian as saying. An army release confirmed that the crash site was located at an elevation of 11, 200 feet northeast of Kalinchowk, near Ghorthali village. Dolakha and Sindhupalchok, the adjacent regions on the border of which the helicopter has been found, were some of the hardest hit by Tuesday’s 7.3- magnitude earthquake. After contact with the helicopter was lost, around 3pm Tuesday, the Nepalese army committed 600 ground troops to the search effort.

A U.S. rescue team was surveying the site crash, a U.S. Pacific Command spokesman said Friday, assessing the damage and identifying the aircraft. The wreckage has been positively determined to be the missing Huey, the military confirmed. “The assessment of the site is ongoing and a thorough investigation will be conducted,” Army Major Dave Eastburn, spokesman for the U.S. military's regional Pacific Command said in a statement.

Nepal’s Defence Secretary Ishwori Prasad Paudyal apprised Reuters of the extent of the damage. “As the helicopter has broken into pieces and totally crashed there is no chance of any survivors,” he said. The ground search for the downed aircraft has been assisted by two other U.S. Hueys and two MV-22B Osprey tilt-rotor planes, as well as Nepali and Indian helicopters, according to Reuters.

The helicopter went missing while delivering aid intended to offer relief to victims of Nepal’s devastating 7.8-magnitude earthquake, which struck on April 25. It went missing after the country’s second large earthquake on Tuesday, on a flight-path that took it near the epicenter of Tuesday’s quake. In previous statements, Pentagon officials had indicated that there had been no reports of noise or smoke that might suggest the helicopter had crashed. The Hindustan Times reports that a Pentagon official mentioned “some chatter about a fuel problem,” on the crew’s radio before the chopper went missing.

Although the US military has not yet released the names of those aboard the helicopter, NBC News reports that the family of Chris Norgren, of Kansas, has confirmed Norgren was the pilot. On Wednesday, the family told NBC station KSNW that Marine Corps officials had paid them a visit at home, and told them that Norgren was one of the missing.

Nepal’s initial quake, in April, killed over 8,000 people, injured 20,000 more, and left hundreds of thousands homeless and in desperate need of food, water, electricity and medical aid. Around 300 U.S. military personnel were supporting earthquake relief operation in Nepal when Tuesday’s quake struck, according to The Guardian. The second earthquake killed at least 117 people, and injured more than 2,000.

In Charikot, the aid the downed helicopter was intended to deliver was desperately needed. “We came here with such hopes and such difficulty, but now we're just waiting and waiting,” Navraj Nama, a 25-year-old Nepali who travelled to the town after the initial quake, told AP. He added that 90 percent of his hometown — nearby Danda Khorka village — had been damaged in the first quake, and many buildings had been finished off by the second.