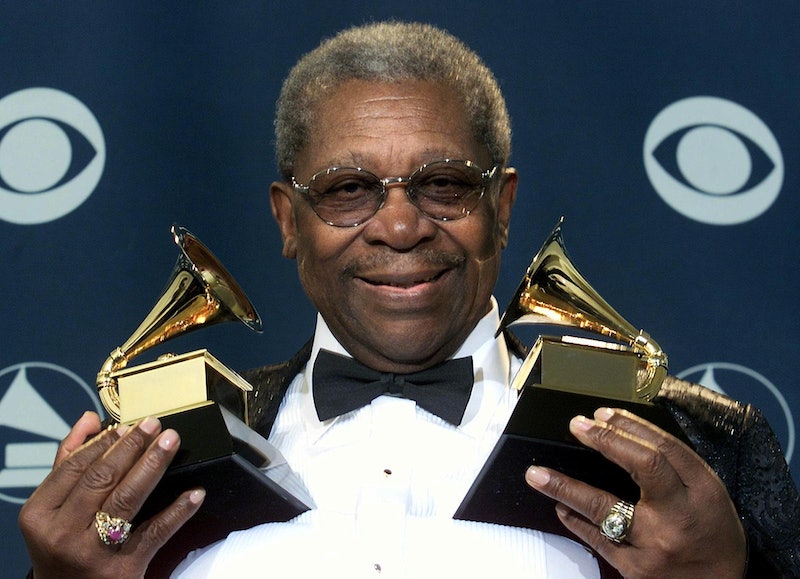 The world has lost another legend and, understandably, people are reeling from that loss. This time, it was a legend from blues history. That's right, blues musician B.B. King passed away at the age of 89, dying peacefully in his sleep in Las Vegas at around 9:40 p.m. King has been in declining health for the last few months, posting on his website about being in the hospital and then in hospice care in April and May. His death has been confirmed by his attorney, Brent Bryson, leaving fans to mourn the loss of B.B. King. However, it isn't just fans who are hurting in this sad time. Celebrities are also expressing their sadness over B.B. King's death, because being a fan and being a celebrity are far from mutually exclusive.

Born on a cotton plantation in Mississippi, King went on to become a member of the Rock and Roll Hall of Fame and the R&B Hall of Fame, as well as being considered the King of Blues. He brought us such hits and covers as "The Thrill Is Gone," "How Blue Can You Get," and "Rock Me Baby." Over the course of a career that spanned decades, King is rumored to have appeared in somewhere between 200 and 300 shows, and has won so many awards and accolades that it's almost impossible to keep them all straight. Even if you didn't know one of your favorite vintage songs was sung by King, the fact still remains that he has touched more lives than he likely even realized during his lifetime.

So it's absolutely no surprise that celebrities are coming out of the woodwork to pay their respects. We've lost a master. We've lost a legend. We've lost a musical genius. And I'm sure I'm not alone in being resolved to blast King's music from my speakers for the rest of the day so it feels like he is still with us.