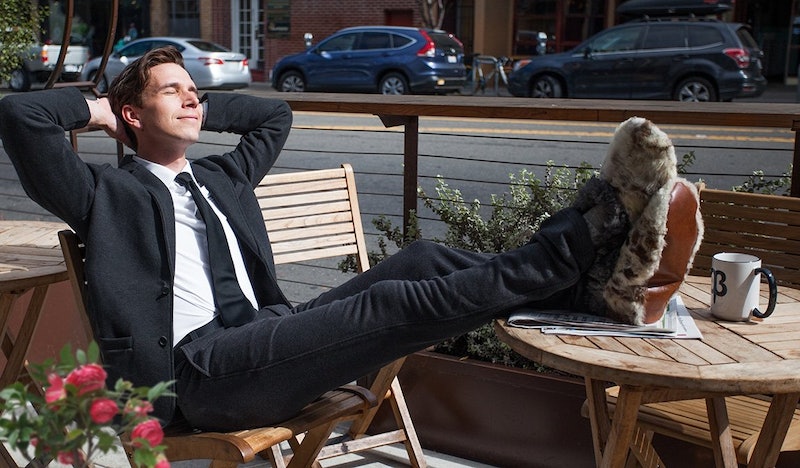 Going to work in pajamas is a dream scenario that so many of us have thought about, but only Rihanna and Grace Coddington can pull off. That's now changed because writer Greg Ferenstein wore business suit pajamas for a week and no one noticed. Known as "The Suitsy," this business suit onesie hybrid went undetected while Ferenstein attended a Republican convention for presidential hopeful Rand Paul, but also for several days as he went about his daily routine.

"For four days I barely took the Suitsy off — and never wanted to," Ferenstein said. "I worked out, went grocery shopping, held business meetings, and went out drinking at a bar in it... it was like wearing my normal attire all day long." It wasn't until he revealed the comfy secret of his business suit that people even knew the truth about his social experiment. He said:

"The consensus was clear: Everyone thought I was wearing a traditional suit."

To further investigate the power of The Suitsy, Ferenstein conducted an online poll to see whether consumers preferred the traditional business suit or the San Francisco-based product. He posted a side-by-side photo without labeling which one is real. The normal suit (A) won the poll, but there was still a significant percentage who ended up choosing The Suitsy (B). In another test, Ferenstein used a sleep tracker to determine how comfortable The Suitsy was for sleeping. He discovered that wearing it as opposed to sweatpants actually improved his deep sleep by three percent.

"At the end of my trial, The Suitsy definitely proved it's worth in both style and comfort," Ferenstein said. If you want your own, The Suitsy is sold at betabrand.com.

Check out the comparison photo of the two suits below:

Ferenstein also uploaded a video demo on his YouTube.

More like this
42 Black Owned Fashion & Beauty Brands To Support Today & Always
By Mekita Rivas, Shea Simmons, Kui Mwai and Dominique Norman
How To Protect Your Scalp From The Sun, According To Derms
By Paris Giles
4 Game-Changing Makeup Hacks For Oily Eyelids
By Hilary Shepherd
Why Experts Prefer "Dry" Pedicures For Healthy Nails
By Danielle Sinay
Get Even More From Bustle — Sign Up For The Newsletter