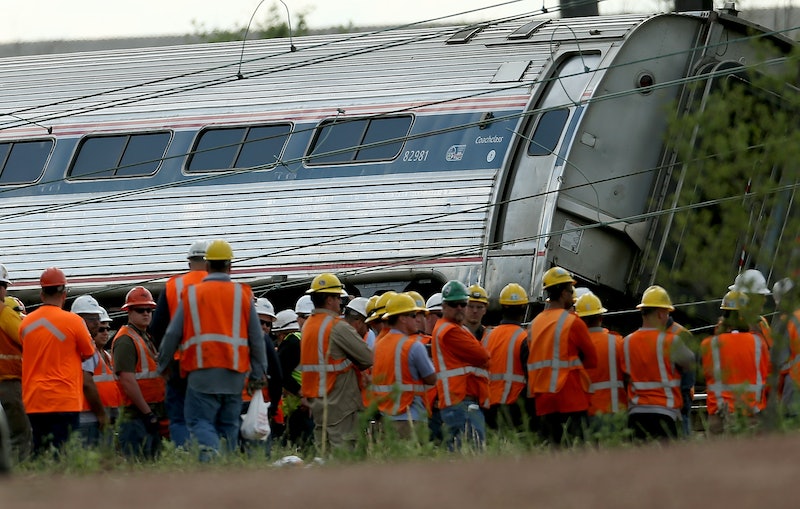 Late on Friday, authorities from the National Transportation Safety Board investigating Tuesday's deadly Amtrak derailment in Philadelphia announced that the train's windshield may have been hit by a flying object before it crashed. The update follows a week of gruesome discoveries, including the news that the train had accelerated to twice the speed limit of 50 mph in the moments leading up to the accident. Although officials are unsure of what actually pierced the trains windshield, investigators wasted no time in calling on the FBI for assistance.

"[An assistant conductor] reported that about three to four minutes after departing Philadelphia, she said she heard the engineer talking to a SEPTA engineer," stated NTSB member Robert Sumwalt in a news conference on Friday, indicating that the assistant conductor had also claimed to have heard the SEPTA engineer tell Amtrak driver Brandon Bostian that he believed a rock had hit his windshield or that the train had been shot at.

Authorities' hands have been tied throughout the investigation of the moments before the crash, primarily because they say Amtrak engineer Bostian subsequently suffered a concussion and could not remember anything leading up to it.

As the FBI looks into the mysterious object that supposedly pierced the train's windshield on Tuesday, a few officials have offered up their own educated guesses. On Friday evening, The Wall Street Journal reported that a SEPTA spokeswoman had confirmed a windshield impact with the SEPTA train prior to the Amtrak derailment, as detailed by the assistant conductor.

The spokeswoman also told The Journal that the "unidentified projectile" had struck the SEPTA Trenton line commuter train at around 9:10 p.m. near the North Philadelphia station.

"Vandalism of moving trains in the area is a common occurrence," the spokeswoman told The Journal.

On Friday, SEPTA spokesman Andrew Busch added in a statement that the unidentified projectile may well have been the work of bored teens.

"Unfortunately it does happen occasionally that we get juveniles throwing rocks," said Busch, who later clarified that he did not believe the incident was related to the Amtrak crash.

Earlier in the evening, another Amtrak train in the area was also struck by a flying projectile, which witnesses told The Philadelphia Inquirer had hit a passenger window. Those on board reported that the Amtrak Acela 2173, which had been traveling down to Washington, D.C., was struck around 9:15 p.m. near the 30th Street station in Philadelphia.

"[I was] like, 'Oh my God, my window’s shattered'," 29-year-old passenger Madison Calvert told NBC this week. Calvert, who had been working on his laptop, recalled thinking that someone had thrown something at the window.

"It's pretty thick glass," added Calvert's co-worker, Kam Desai, who was aboard the train with him that evening. "For it to get shattered, at that point it's pretty hard impact," Desai told the Inquirer.

While officials have said that they do not believe any of the incidents are related, Calvert insisted that the three projectile incidents weren't coincidence.

The FBI investigation into the possible projectile impact on the Amtrak train that derailed on Tuesday evening is still ongoing, say authorities.

More like this
The Most Powerful Photos From The Weekend’s Abortion Rights Protests
By Melanie Mignucci
'Line Of Duty's Writer Just Dropped A Bombshell About Steve & Kate
By Catharina Cheung
Every Single Big & Small Way You Can Fight For Abortion Rights
By Tess Garcia
For These Abortion Clinic Volunteers, Going TikTok Viral Is A Risk Worth Taking
By Audra Heinrichs
Get Even More From Bustle — Sign Up For The Newsletter