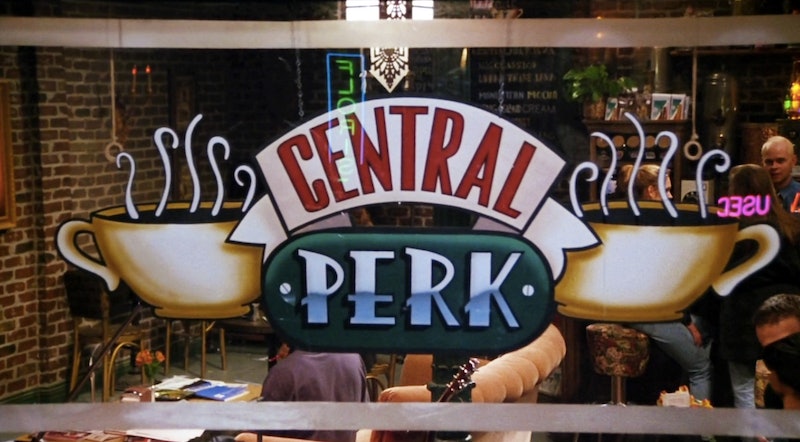 It's 2015 and life is changing every day, but there's one thing that remains constant: Friends is the best TV show ever. It's just as funny today as when it originally aired, and it continues to earn legions of new fans every day, and for good reason: it's amazing. We've learned so much from Rachel, Ross, Phoebe, Joey, Monica and Chandler over the years, from how to treat those you're closest to, to how NOT to make a trifle. But, even in its perfection, Friends wasn't always the most realistic show. This is understandable, considering it's a sitcom that's not meant to be entirely rooted in reality, but still — there are certain myths about living in NYC in which the show dabbled, and as someone who has lived in NYC for 13 years, I've just got to point them out. In a way, they kind of make the show even funnier.

For instance, unlike the show would like us to believe, living in New York City isn't always fun, easy and totally affordable for an unemployed (or minimally employed) 20-something. This doesn't take away from the series, of course — and it's not to say that Friends didn't get some stuff about NYC right, because it so did — but it's still something to think about. Especially if you're the type to get your perception of the big city from television and film.

Need proof? Here are seven things Friends made me believe about New York City that aren't entirely concurrent with the real deal...

1. You Can Easily Get A Seat For You & Five Friends At A Coffee Shop At Any Time Of Day

When you and your five friends want to hit up your local coffee shop, the couch and adjacent chairs will always be empty and ready for you to plant yourself there for hours on end, because why wouldn't they be? (For what it's worth, the writers did make an effort to get around this by creating a loophole and sticking a "Reserved" sign in most scenes to indicate that the gang had permanent claim on the couch — but still, you know New Yorkers aren't obeying some little sign.)

2. You Can Keep A Rent-Controlled Apartment Forever

Sure, the apartment Monica "owned" was under her grandmother's name and thus rent-controlled, but while I can suspend disbelief that she could afford this even during her unemployed days, I can't truly believe she kept this place for over 10 years without a serious price hike. There are laws about this!

No one seems to have curtains, and everyone seems to love being naked in front of their windows for all their neighbors to see. Of course, every city has its exhibitionists and some people aren't self-conscious, but Ugly Naked Man and Naked Rachel certainly made me think this was a bit more common than it probably is. When I moved here, I didn't immediately don my birthday suit with abandon (though I have started changing my shirt with the curtains open).

5. It's A Good Idea To Get A Giant Couch

New York City apartments are small, and if you're lucky enough to live in a West Village walk-up, chances are they're even smaller. In what universe it seemed like a good idea for the group to get a giant couch at all, let alone to think they could move it up the narrow staircase these type of buildings usually have is beyond me, but I believed it!

6. It's Totally Common To Have A Massive Group Of Friends

Sure, Ross and Monica were siblings, but I certainly don't have a group of five best friends, half of which I live with and the other half which live right across the hall from me. I sure had grand ideas about how popular I'd be with all my buddies once I moved here, but if anything, you'd better have friends built in because they can be hard to meet in the city.

7. You'll Interact With Celebrities On A Daily Basis

I used to think you'd be able to walk right into a movie set when I moved to New York, and get dates with the likes of Jean Claude Van Damme, because celebrities are everywhere and happy to talk to you. You will see quite a few famous people if you're living here, but they're not generally in places you can just walk up and bother them (and most New Yorkers know better than to do that, anyway). It's an unspoken rule that you keep your distance and your cool.

But regardless of all of these inconsistencies with real New York, Friends' version of this city is still a place I like to call home.

More like this
“The Door Is Always Open” For Another 'Breaking Bad' Spin-Off, Says AMC Boss
By El Hunt
The 'Hocus Pocus' Sequel Finally Has A Release Date & It Makes Total Sense
By Shannon Barbour and Radhika Menon
S Club 7’s Jon Lee Continues To Reach For The Stars
By Rachel Mantock
Lauren Rae Is Bringing Back The Sex And The City Vibes In Her New Memoir
By Shahed Ezaydi
Get Even More From Bustle — Sign Up For The Newsletter