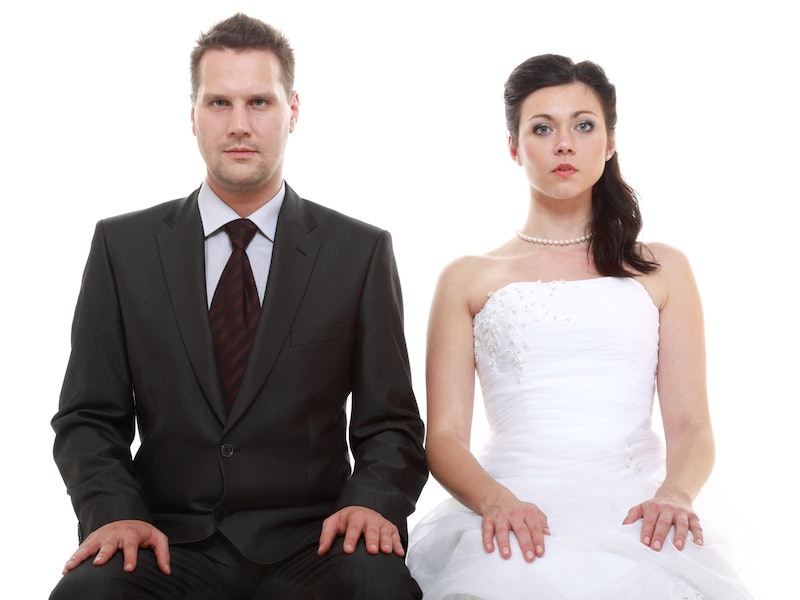 When I first started reading Seth Adam Smith’s viral essay entitled “Marriage Isn’t for You”, I wasn’t sure what to expect — but I definitely wasn’t expecting what turned into a sappy, romantic plea that people stop thinking about marriage as all about themselves, and instead spend more time thinking about the partner that they love. Smith’s basic advice, which he writes originally came from his father, is definitely sound; selfishness kills relationships, and if you’re going to make a commitment to another person for the rest of your lives, you had better be willing to think of them always.

But as I read, I kept asking myself, is this really an attitude the world doesn’t have already, as Smith suggests? And then it occurred to me: it’s an attitude women are expected to have, but not men. And the fact that a man wrote this is why it's going viral at all.

I don’t disagree with Smith’s advice, per se, but I do think that the issue of selflessness in relationships is a very gendered one, and to suggest uniformly that all people need to think less about themselves is to ignore the fact that, historically, selflessness has been demanded of women in relationships. Women have been expected not only to stay home to look after the house and raise the children, but people assumed that such a selfless role would be fulfilling for women because they are women. Women have been expected to be accommodating, to take care of their husbands, and to defer to their judgment and not contradict them.

When Smith recounts for us a vague anecdote about a time when he was reminded of his father’s advice, I am unsurprised that it is Smith’s wife who is selfless. Selflessness is a role women have been obliged to take on for generations.

Smith seems to find his father’s advice about marriage and the importance of not being self-centered in a relationship as revelatory. He blames what he sees as widespread self-centeredness on “Wal-Mart culture, “ an obsession with finding happiness and giving up on things that aren’t going well. There’s certainly a lot of that mentality in our culture, but I’m going to blame Smith’s former self-centered worldview not on a retail giant (much as I love to criticize Wal-Mart) but on patriarchy.

Male privilege tells men, especially cis-gendered, straight, white men, that the world is about them. Women get the opposite message. Women are told that their lives should be about their husbands. Women are expected to make sacrifices.

So while a marriage does need people to make sacrifices, to be considerate and even selfless at times, marriage also shouldn't mean that women give up their identities, their agency, or their sense of self-worth to support their husbands. When you start telling women to be more selfless, to care less bout their own happiness, it isn’t revolutionary. It’s only reinforcing the idea that the husband is more important than the wife.

What relationships really need is balance — both partners are selfless sometimes, but while still being their own people. And to achieve that balance, women need a different sort of advice.

More like this
Here's How To Support Jewish People Amid Rising Antisemitism
By Hannah Orenstein
Emily Ratajkowski & Pete Davidson's Astrological Compatibility, Revealed
By Nina Kahn
Are Sagittarius & Capricorn Compatible In A Relationship? Astrologers Weigh In
By Kristine Fellizar
Michelle Obama Opened Up About The "Discord And Discomfort" Of Marriage
By Stephanie Topacio Long
Get Even More From Bustle — Sign Up For The Newsletter