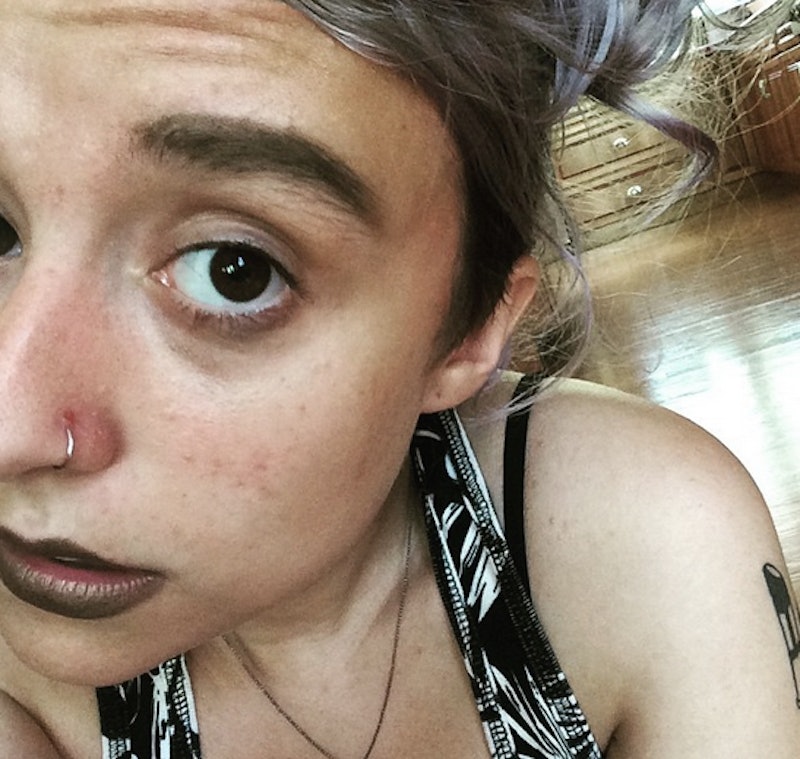 Before last week, I could never have imagined going without deodorant. Sure, I knew there are plenty of natural alternatives to it. But I figured that they were way less effective, and shuddered at the thought of walking around with damp pits and B.O. that you could smell for miles. I used to judge those who didn't wear deodorant, thinking of it as a simple part of basic hygiene. But in reality, there is nothing unhygienic about armpits, with or without the deod. For female-identifying individuals, being odor-free and hairless at all times is a basic societal expectation. Meanwhile, male-identifying individuals often seem to be given a pass, and are even encouraged at times to embrace their "man stink." "Man stink" presumably comes from all their male activities like working hard, working out and having sex.

But hey! I'm an important lady-about-town! I'm working hard and sweating, too! Sometimes sweating a lot, depending on the temperature and my mood. And I reserve the right to sweat and stink just as much as any man does!

After I dyed my armpits, I had to refrain from using deod the next day so as not to bombard my pits with too many chemicals at once. But after the first day, I decided to challenge myself and these norms by not picking up my trusty Dove deodorant once for an entire week. Embark with me on my seven-day journey, if you're brave enough ...

On the first day, it was hard for me to shake self-consciousness and stop apologizing to everyone in my family for my stinky pits. Luckily, my apologies were unnecessary, because no one noticed any odor. Encouraged by this reaction, I decide I was going to extend this little walk on the wild side and see what would happen. I mean, what's the worst that could actually come of it?

By the second day, the odor seemed pretty obviously strong, even overwhelming. I lifted my arms and took a waft from time to time, just to check that they still smelled like B.O. Today, I also noticed that I liked the feeling of not wearing deodorant. My pores felt less clogged, and it was like my pits were taking their first breath of fresh air in years.

My pit hair, which was recently giving me problems with itch, was noticeably less irritated. I graduated to only apologizing to my family for the smell when I hugged them, and they still claimed to not smell anything. I couldn't tell if they were just trying to be supportive or if they really couldn't smell anything. If the latter was the case, I felt the need to step up my stink game. At the end of the night, I caught a whiff of my pits, and for the first time ever, it struck me as a sexy smell.

On day three, I felt totally sexy. Like, super empowered and like a musky, sexual being. That morning, I apologized for my odor when hugging my mother, but caught myself mid-sentence. Not only did I remember that she would probably deny having smelled anything, but I realized at this point that I didn't really care if she did. I began to question what it is abut body odor that's so "embarrassing," especially when it's such a sexy and musky smell.

As the day went on, I began feeling more confident whenever I caught a sniff of my pits. I wondered if bodies go through some kind of withdrawal from ceasing to use deodorant, and whether my pits would stop smelling altogether for a little while (so far, this hypothesis had been proven wrong).

I woke up on the fourth day smelling my pits a lot less. I couldn't tell if the odor was actually getting more subtle, or if I was just getting used to it. I was hesitant about showering at this point, out of fear of reducing the level of B.O. However, my fears were all for naught, and I walked out of the shower with my pits mostly unaffected.

I decided to take these puppies out for a spin, walking around town (it was a pretty warm day), and I didn't sweat any more than I would with deodorant on! This was an eye-opening development for me. But temporary ...

The fifth day began with me not being able to smell my pits at all, and ended with them being the ripest they've ever been. It was abut 90 degrees out, and I went with my mom to get smoothies and walk around town. By the end of that walk, my pits were pretty damp, to say the least. They became so smelly I almost couldn't stand them myself.

Once we were in the enclosed space of the car, my mom admitted that the smell was "very strong" today. I began to feel discouraged, imagining my hot subway commute to my summer internship in the city. I figured that pits stinking to high heaven would not be appreciated in a professional setting. I began brainstorming other ways to help my odor in a natural way, and immediately dismissed any suggestion of using deodorant again. My mom suggested rubbing scented oils on my underarms.

By the sixth day, I was feeling mildly discouraged and a bit annoyed. Why do my armpits smell bad to people? When they're not sweating profusely as a result of an uncomfortably humid day, they're more than bearable. They smell sexy. To me, at least! Why is our society and our workplaces so afraid of a little natural musk?

I decided I'd be willing to challenge these beliefs in social settings, but that it might be too risky to go commando-armpit at my summer internship. I had a moment of weakness and almost gave in to the call of the deodorant on the bathroom counter. However, I found essential oils that smelled like "the ocean," and daubed some on my pits instead. My mom's suggestion turned out to be on point, as the oil effectively reduced the power of my stench.

I wondered what my partner would think of my going without deodorant, since they always smell super clean. But whenever we have sex, I love the smell of their B.O. afterwards. I hope they could be open to the idea that my B.O. can also be sexy. I talked to my partner, and I'm happy to report that they encouraged me to keep going without deodorant. They mentioned that their mom uses crystal deodorant, which I'd never heard of. My partner offered to pick it up for me during their next Whole Foods run.

On the morning of the seventh day, my armpits still smelled like the scented oils I rubbed on them the day before. And they lasted all day without me having to reapply them. I felt super triumphant, and also lucky to be a person who experiences only light to moderate sweating. It doesn't take much to cover up some of the more potent notes of my B.O., and the chemicals found in common deodorants and antiperspirants are not required.

By the end of this experiment, I decided to throw out my Dove deodorant and instead rub scented oil on my pits. Fortunately, this very basic routine works for me! But for people who sweat more, and for days when I'll be out in the heat more, crystal deodorant and other natural alternatives to deodorant certainly suffice.

The reality: We definitely don't need cancer-causing chemicals to cover up our body odor. And honestly, we don't actually have to cover it up at all! Give the no-deod challenge a try, and embrace your sexy stink!

Need a laugh? Check out these ladies trying to do their makeup without a mirror (and subscribe to Bustle's YouTube page here):